I got involved in a forum thread requesting ideas and help for repair of two New Zealand Hiking poles which had been cut in half.

I need a small job done by someone versed in both wood and metal turning.
Whilst honeymooning in New Zealand several years ago, my wife and I walked the Milford track. A wonderful experience and I highly recommend it.
To assit with the 4 day walk, we purchased some walking sticks/hiking poles if you prefer. These hiking sticks (I'll stick with that name) were not that expensive but have some sentimental value. Rather than get some carbon fibre, extendable wonders we opted for the hand crafted wooden (possibly Rimu) one piece model.
We spent 3 weeks in NZ, flew back to Sydney, where we had stashed a different set of travelling clothes, and then flew to Japan the next day.
We basically packed all the NZ stuff we didn't need in Japan into a big bag and an obliging relative met us in Sydney and took the bad home for us.
To get the hiking sticks, which are 1300mm long, home I had to cut them in half, always with the intention of joining then together again at a later time.
I found them during a clean out recently and decided it was time to make them whole again.

I would like a brass, screw together fitting made and fitted to each stick.
Willing to pay for your time and materials of course.
Let me know if you have the capability and would like to give this a go. I have neither a wood or metal lathe.

Tony handed them over to me back then and they have sat on a shelf since in my workshop.
Tony later supplied a length of Brass rod which I used to do the work.

I did a rough drawing of what I had planned to do, some changes had to be made due to the rough shape of each pole neither were straight or true or completely round. 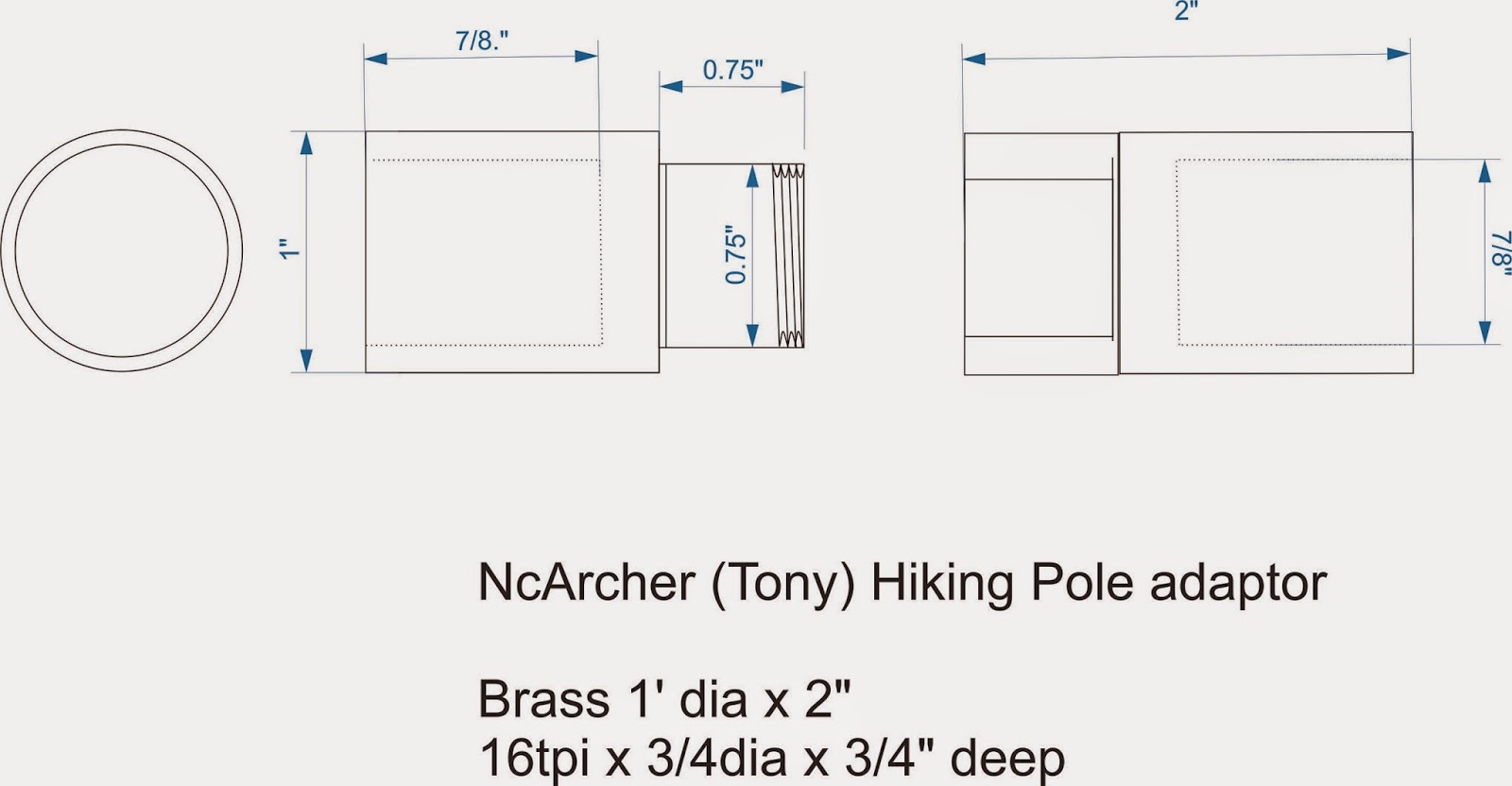 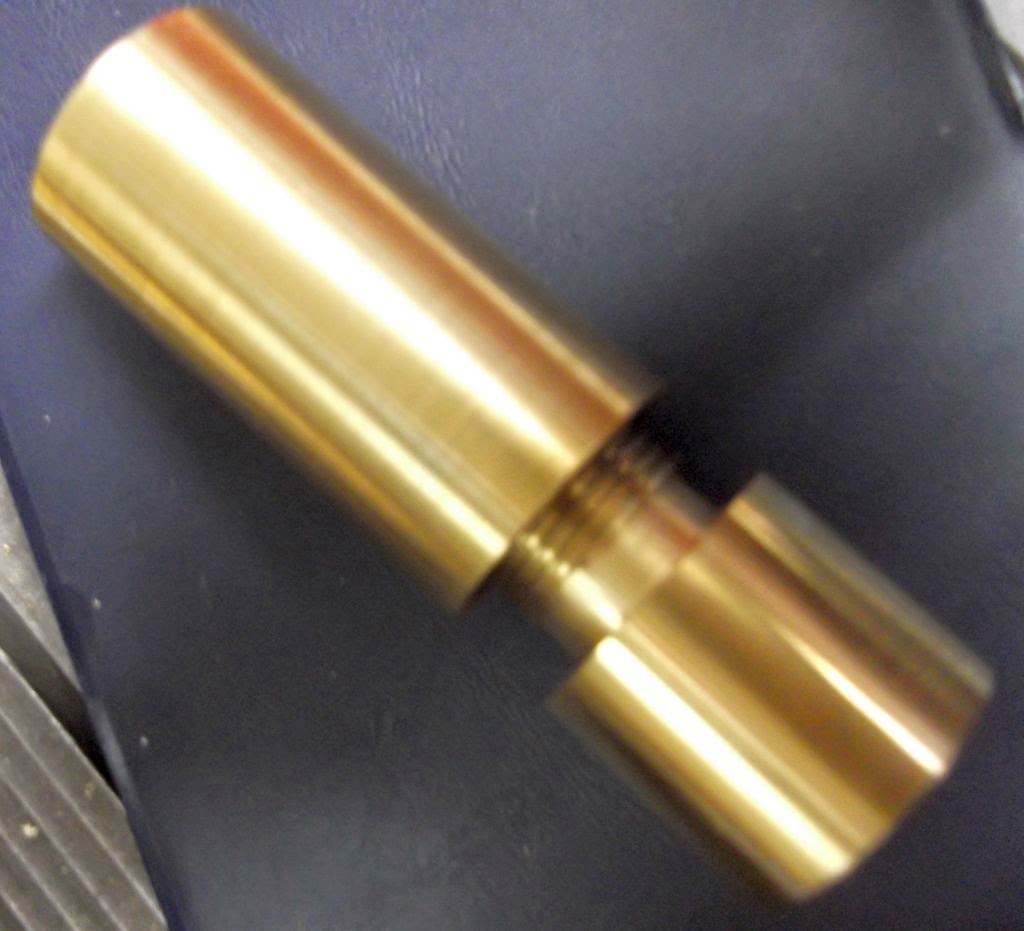 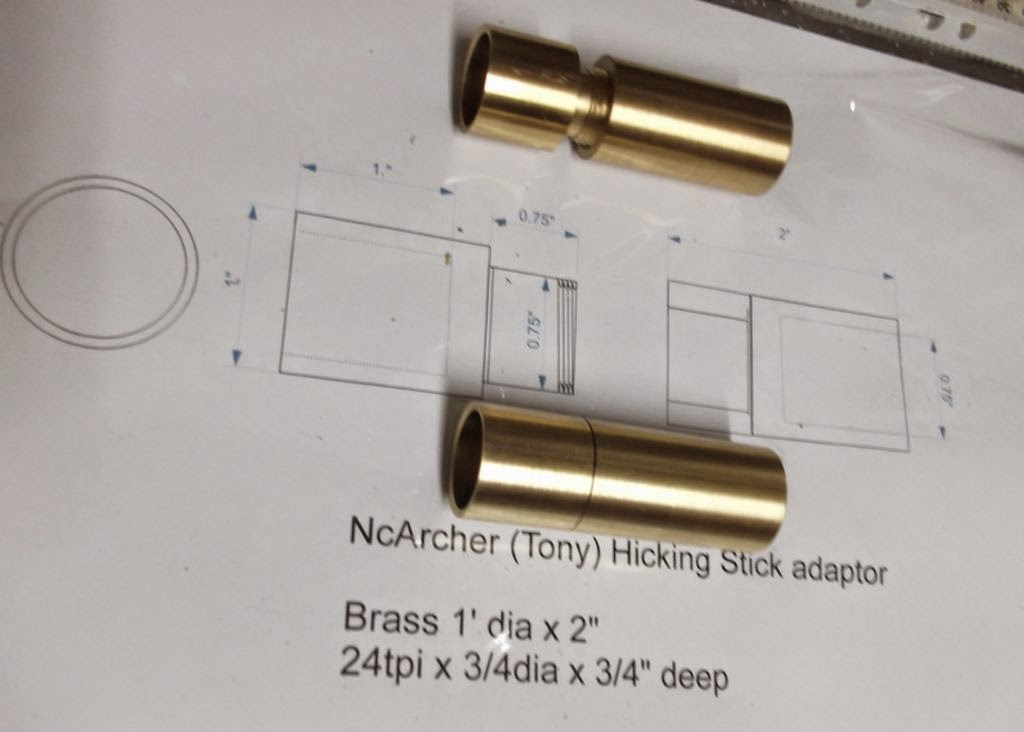 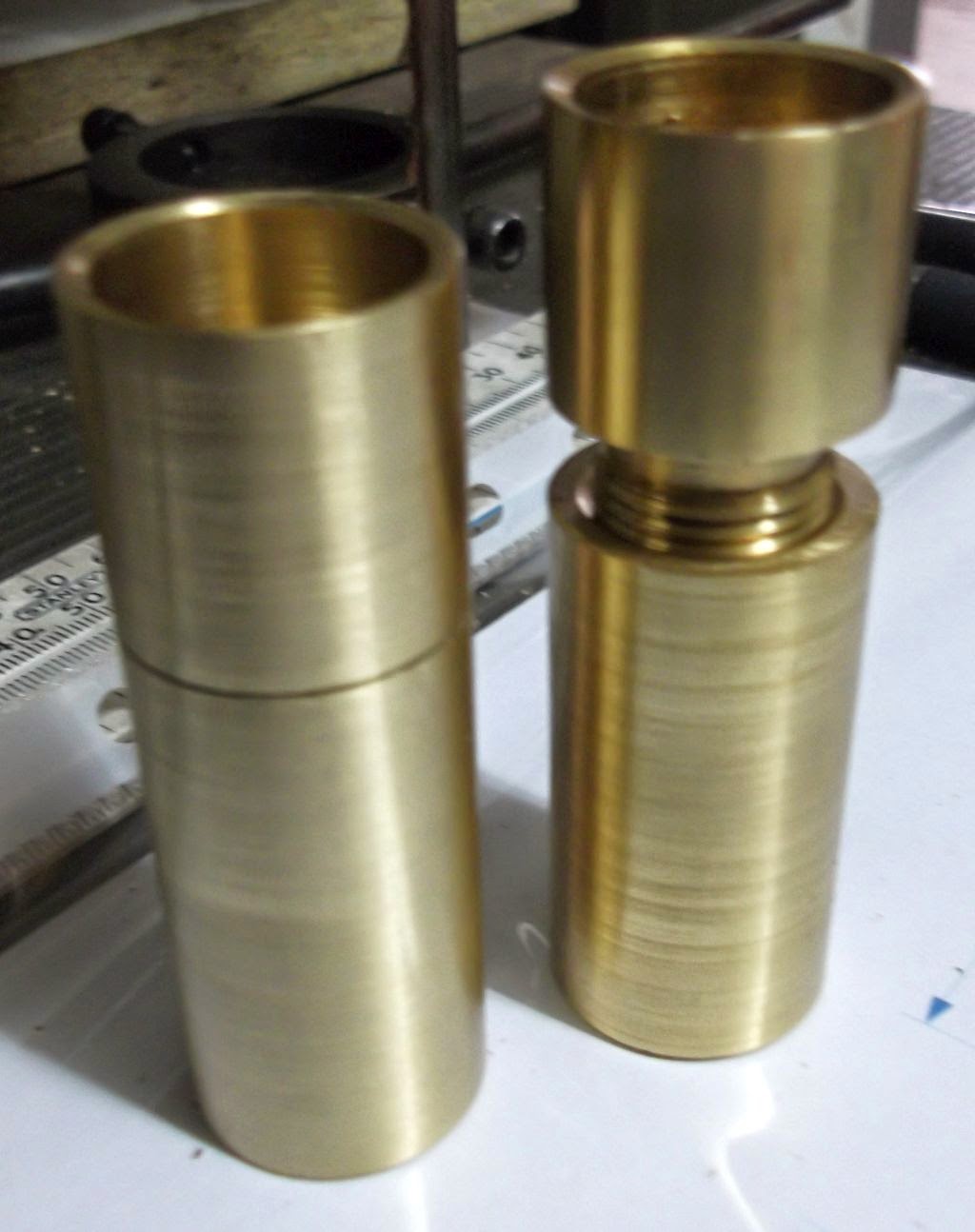 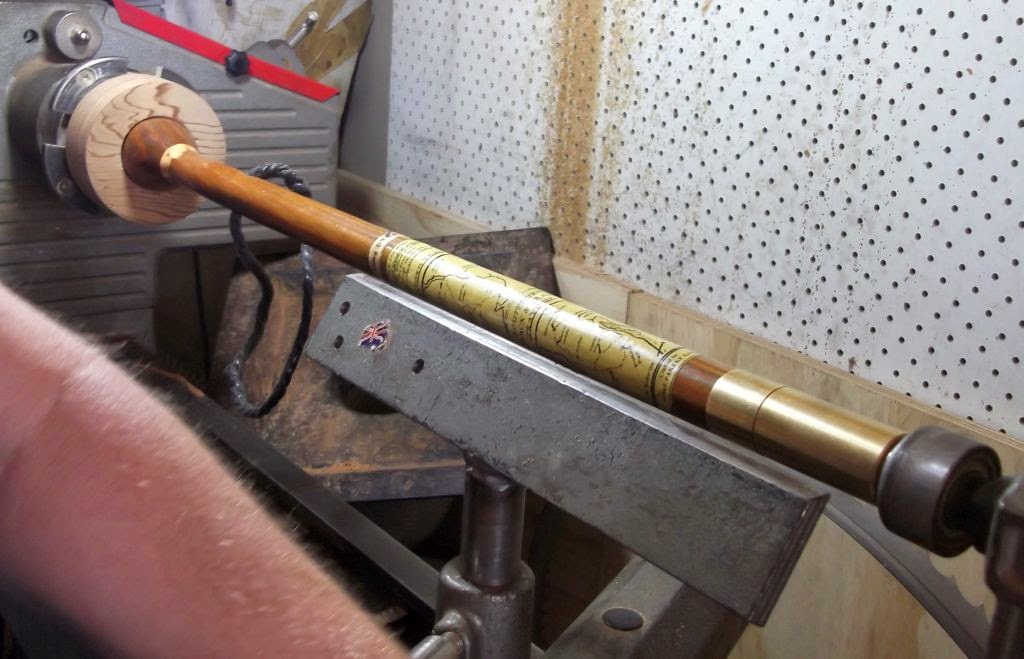 The joiner is much like what's used or was used on Flag poles carried on parades used in schools, Scouts, Boy's Brigade or military.

I would have liked a much longer tenon/fural/sleeve along the shaft to strengthen but as there is a map of the walk they did to close to the cut it would have covered that in part.

A pool cue joiner would not have worked as they do not support the outside diameter of the shaft which will have pressure on it when in use. 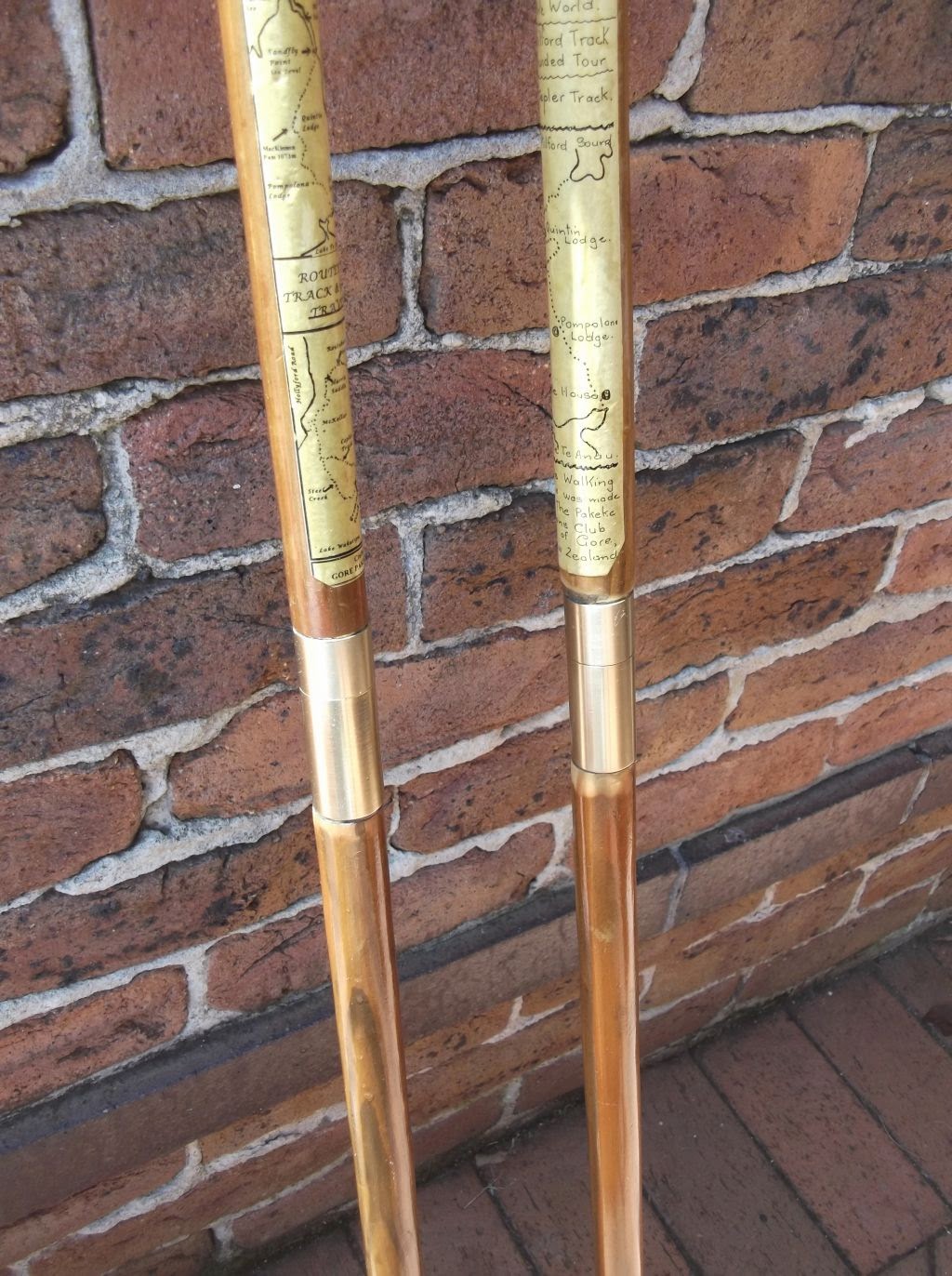 Posted by Ray & Sue Sanderson at 10:11 No comments: Links to this post