When fate intervenes. We had planned our day almost down to the last minute. Dropping off the PC at Techies to fix/replace under warranty Blue Ray and have more memory put in laptop. Visit Sue mum in the nursing home at Bexley, after pick up PC and laptop. On way home get new tyres for the wheelchair.

So after unplugging everything from the PC (now bare in mind I have to climb out of the wheelchair down to floor level to do this and back again when done.). Out to the car, Sue carries PC etc me sitting waiting while she puts the wheelchair in the back........
."Bloody hell"...
."Whats up"?
"Your chairs broken"!!!
"Yeh right"
Brings wheelchair round flopping all over the place, one of the main centre stays has snapped clean in 1/2 right at the bolt joint. 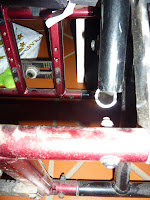 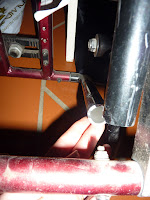 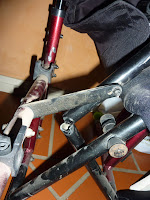 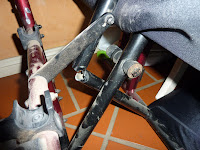 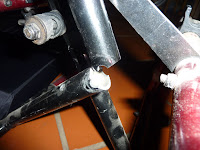 Pc is carried back indoors.

I am stuck in the car so a search for a wheelchair shop near by. Find 2 one Moorebank, One Ingelburn. Closest first, I won't go into denigration mode but people who sell wheelchairs should have some common sense .........Nooot in this store. No disabled toilet, wheelchairs for trial all have flat tyres, no cushions. Here try this see how you like it.

We had the choice of direction to take to Ingelburn ......yep chose the one which had major traffic accident didn't we if taken the other we could have saved 30mins.

To the great people at Aidacare - Healthcare Equipment Solutions
I had CUSTOMER CARE from the time Sue had to go in and explain she required a wheelchair to bring me in. Measuring up, technical guy's involvement, swapping some of my old chairs stuff to new chair. Adding new front castors and my old forks, adjustments and we were out of the just after 1.30. Thanks heaps guys.

Pity the cost of such to all disabled is so darn high $800 for a good quality wheelchair,
I am not complaining in regard to Adicare people as additional work and fitting was all inclusive. No Centrelink or medical benefits covers these expenses.

Yes cheaper are available but its used everywhere, everyday and then some. Oh my old one has been 4x4 often just ask Fletty or Sue, additional weights of large burls eh Pat.

I guess last Saturday weeks getting thrown out of the chair due to front wheels being bogged in sand 4", me having a face plant almost may not have helped perched like drunken bird teetering between 1/2 full and half empty (you know the ones). Glad there's no photos of that predicament a doz 80 yr old ladies trying to assist.


Mind you we saw a darn nice electric Scooter while out at Ingelburn.


Photos to come of all.
Posted by Raymond Sanderson at 17:00 No comments:

Having finished the 3 tier Cake Stand of Rosewood Boutique Timbers showcased my work (Thanks Mal & Greg).
Daniel from For Love Of Wood who is the blogpage organiser for Boutique Timbers had his lovely wife view the platters and she mentioned she would like a single cake stand be made, this became expanded to doing a 3 tier.
Daniel had sourced Huon Pine again all wood supplied by Boutique Timbers.
Now Daniel is a very talented man with a love for photography. his work gives him a fine opportunity many would love to have.

Daniel looked into his stock of Huon and found these.

Parcel arrived Monday was sent Friday from Newcastle region. Huon can be either dull and boring or some spectacular and interesting inclusions. Daniel's selection has some variety, just hope I can retain some during the turning process. 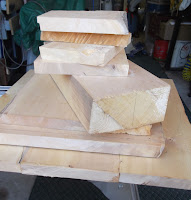 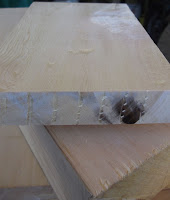 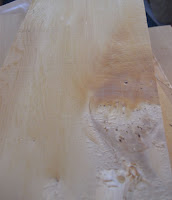 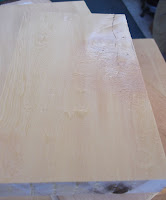 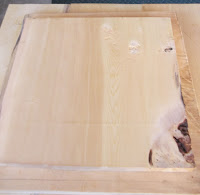 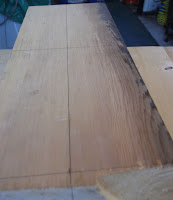 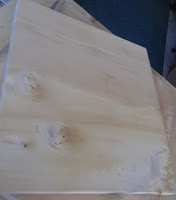 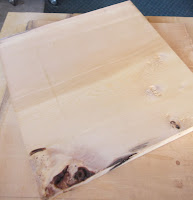 I am just hoping there is enough stock and the butt joined 18" will hold together during turning.These photos are prior cutting into rounds of 10", 14" 18" for the platters. 4 square for the columns and finials. A base piece for the 14" and the small 90 and 80mm for the flange section.

The stock all cut and ready to go. 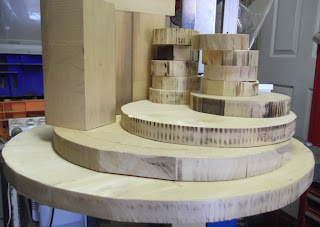 Posted by Raymond Sanderson at 21:15 2 comments:

"Another Day at The Office"

These were a commission, Fletty very cautiously asked not knowing if I was anti-gun (he'd been ordered to by higher authority). He soon found out my brief history with firearms. From shooting rabbits with my Uncle Ramshaw back in the UK, then with my Uncle Roy, cousins and Eric Simms and his brother at times up around Tea Gardens Pine Forest in the 60's. A boyfriend of mothers got me involved in shooting at a range, I was about 13 at the time a variety of weapons including shot guns.
Only a few times years later did I come into contact with any sort of firearm, once as a coach driver while taking Military personal to an International shoot tournament up at Port Stephens, I had chance to fire at targets a Steyr and SLR.


Fletty ordered the Bolt Action Pen kits from PSI in USA. He had been to the Sydney Woodshow were I organized for Nick Ellis another friend to pass on some acrylic cammo blanks x2 (thanks Nick).
The 3 kit selection comes in Gold and copper tip this was to be wood blank, I used a burl possible Blood Wood. Silver and copper tip using the normal Army Cammo blank. Gun Metal and copper tip choice was an   Urban Cammo blank.

Only one I am not happy with is the Army cammo blank not enough mix of acrylic for my liking appears to be to dark due to amount of brown and lack of lighter colours.

I await Mr Fletts verdict on the one he chose for himself that of Gold and wood. 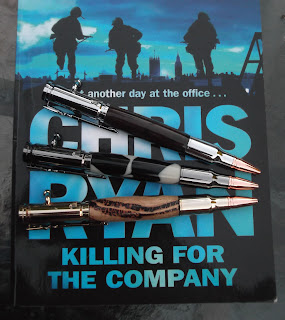 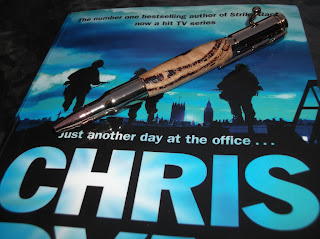 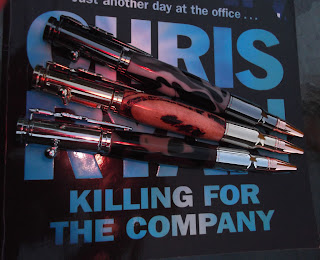 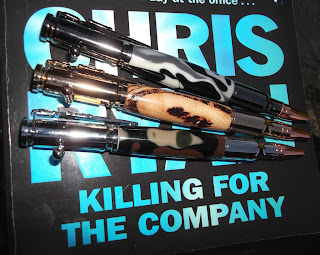 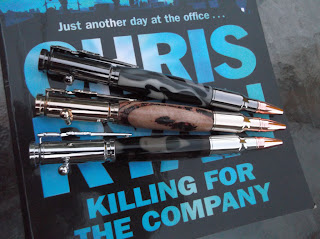 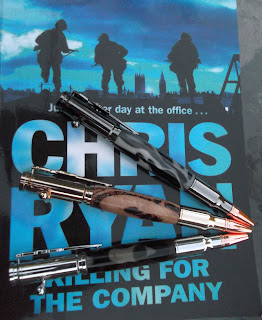 An update 24th August. Fletty has picked up his pen avery happy chap indeed. I am now the proud recipient of the other two. Think I'll keep the Gun Metal for myself.

I found out also 043turning here in NSW is now importing the kits, have already ordered 4 more a special order. 043turning's link to the right in our friends list.

Posted by Raymond Sanderson at 18:50 2 comments:

Local Media Cumberland News Papers has got behind with articles and event notices for a few weeks so the ladies are hoping for a good weekend. 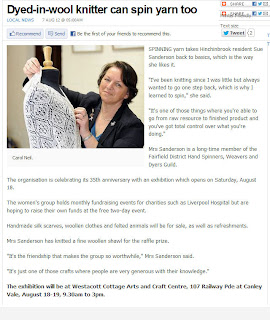 I reported the completion of the First Prize a while back raffle tickets have been selling well still there is a chance to win this beautiful shawl.


The ladies all have been frantically at their wheels, looms and knitting needles making items for display and sale.
From small felted animals, hanks of yarn, scarves, shrugs, vests and a full suit. Silk dyeing and fuzzy balls even a few men's vests and woven bags. 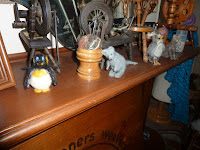 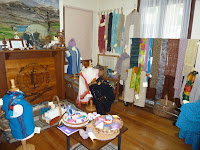 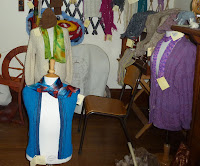 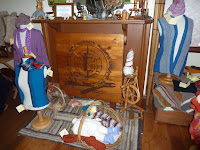 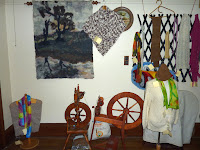 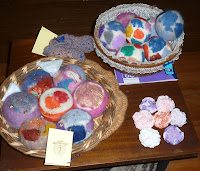 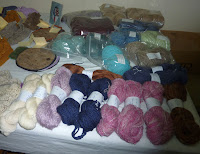 Posted by Raymond Sanderson at 15:30 No comments: