During my younger years at Punchbowl High School while doing metal work using a lathe and Douglas Shaper a desire to own a metal lathe grew intensely. Even years earlier I knew I was interested I had approached a friends dad at one stage if I could learn from him as he had a small lathe at home Mr Wilson however saw me as Dennis the Menace (being a Geordie I prefer the UK Dennis not that whimpy USA kid).

Then after school visiting the local Punchbowl Library and reading Model Engineer and other such magazines during the late 1960's. I had to lay the beast with in to rest and curb the desire for many years. At various times during my apprentice and working years I was able to dabble with a lathe but not enough. Attending Trade shows always raised the desire but circumstances just were never right.

Thanks to John a member of Hornsby Model Engineers who put me in touch with Peter who was upgrading from his ML7 Myford. After inspecting the lathe a week ago with a friend Ken who has some knowledge and working experience of them. A week of cleaning up and throwing out and sorting through wood and other stuff (more yet to do) I am now the proud owner of a ML7 Myford lathe vintage 1970's from what I have been able to determine so far.

Thanks also to my two sons Mark & Peter for their efforts of picking it up early and transporting it then installing it back on its stand this morning.

It came with a number of attachments, a Milling attachment, Jacobs chucks, 3 and 4 jaw chucks, face plate some tooling, rear parting off tool post still covered in original grease, and selection of Back Gears. 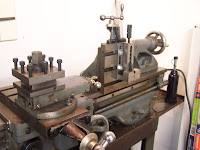 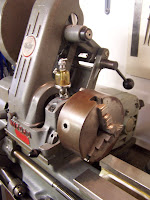 The first three photos are take by Peter at his place.
Left with he milling attachment shown.
Right end of the ways and three jaw chuck.


Below the full lathe 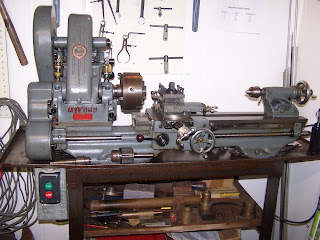 Below Its new home. 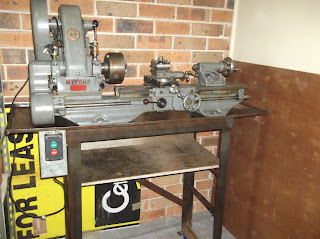 It already has a cover over it to protect it from dust as I am not giving up woodworking or turning but extending my interests. It will be a big learning curve I have some good support already.


Posted by Raymond Sanderson at 11:15 4 comments: Links to this post

Carrying on from the previous post Building Blocks after 5 days of sanding I'd had enough.

Two enviro shopping bags full for the grand kids to play with when they come over to visit. The grain and colour in these are just amazing, I hate Radiata Pine to work with its a few notches above MDF but its cheap and does many a variety of jobs in all sorts of building, construction, furniture, packaging etc. 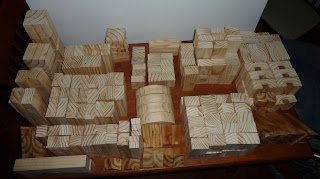 Nanna built this with the whole lot its higgldy piggldy but who cares, if it had been me building it the engineer/designer/architect in me would have come out. 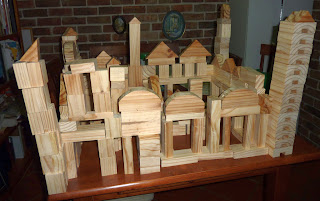 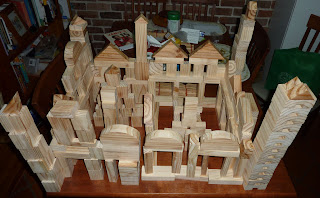 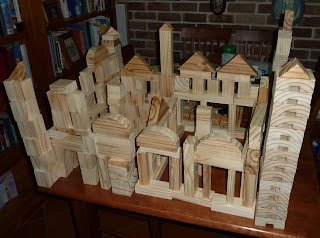 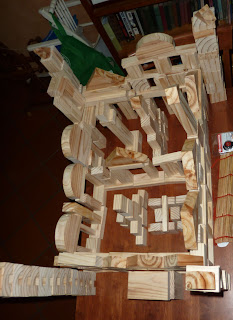 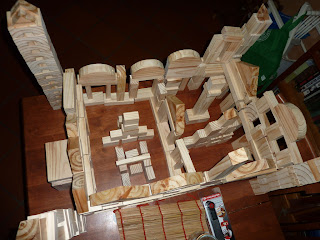 Posted by Raymond Sanderson at 10:23 No comments: Links to this post

A friend is soon becoming a grand parent and Sue made a pair of boots for the up coming event.

Update 119th March :- Congratulations to the new proud parents and grand parents who now have a baby boy and girl in the family. 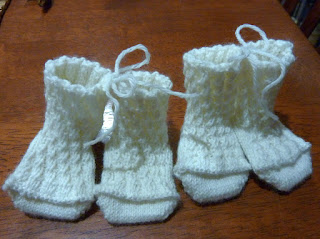 Sue also made a pair of socks for Geoff Steer he's a little bit bigger apparently Tassie weather has been cold enough to wear them around the house already. 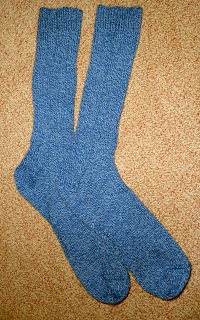 Posted by Raymond Sanderson at 18:17 No comments: Links to this post

Thanks to a request from a fellow Woodie who's son has Autism, his Schools need for Building Blocks. I put my hand up to participate in making some as well as for our own grand children.
Nick supplied basic dimensions 33mm x 66mm x 66mm with variations of shape and size.

I was lucky enough as a kid have a set of these way back in the days of my youth in the UK, they made the journey here with us but were given away by my mother at some stage.

I spent two days cutting an old bed frame of pine, some off cuts son Mark and few bits I had myself. The tub full below. 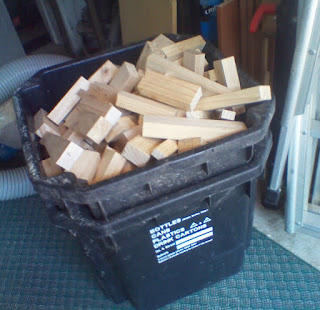 Then came the sanding 4 days so far and still more to do yet, glad I have a Scheppach Belt/Disc sander also that Hare & Forbes had a 3 day sale on as I required more sanding belts. 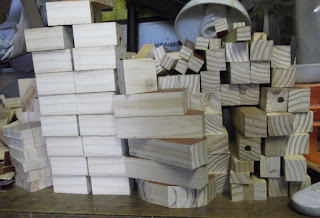 With cutting and sanding wood/timber comes dust and I have been meaning to do a little further dust control on both the Sheppach Bandsaw and Belt Sander. We had picked up an old vacuum cleaner hose which has floated around for some time well finally its been installed. I drilled a 32mm hole in the side of the existing dust hose connection and using the plastic swivel head  which was angled at just the right angle laid it out. The fitting is just push fit but its tight. I was tired of the dust accumulating under the table it won't rid it all but it will help, gave it a run cutting more blocks works well. 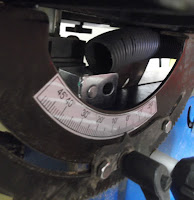 The Bandsaw modification routed in from behind and under the table.

I also tried a direct approach through the arc of the mitre swing.

I picked up a reducer fitting as well for the belt sander I had been using the wet/vac but this screams when in use I have to wear ear protection. Now set up to use the 100m dusty much quieter and does reduce airborne dust which means less cleaning.


The belt sander modification the reducer was the same size as the outlet so Sue came up with a fish food container which was stable/strong enough to use (the white bit). The container shaped to suit the opening which also holds it in place. Works very well off the dusty. 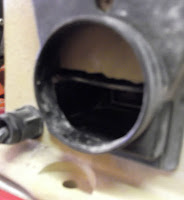 My GMC SCMS (sliding compound mitre saw) did well but the driveway looked like it had snowed dust control for this I have yet to take care of.


Posted by Raymond Sanderson at 18:09 No comments: Links to this post

Taking Time Out To Dwell & Learn.

Over the months of February and March it is the time of year that special demonstrations for woodwork begin.

Starting with Sturt School of Wood16, 17th Feb 2013 .The open days are free and held at the School grounds in the Southern Highlands town of Mittagong.Demonstrations by Australian world class tool makers


The main attraction is the various demonstrations each year. This year I got to see CNC operation (well last 20 mins due to late arrival). After lunch Traditional Mortise & Tenon Joints in Box Making. I usually only go for the one day which means I miss out on the second lot of presentations this isn't to bad unless it something I'd really like to see. 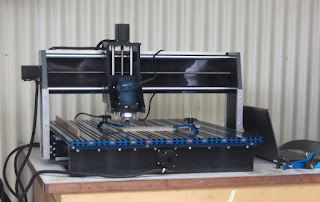 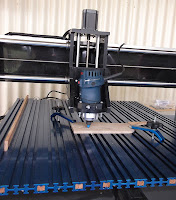 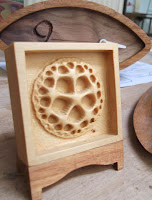 CNC in progress and a completed work. 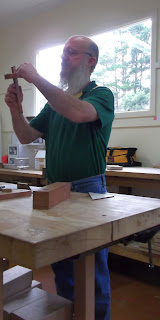 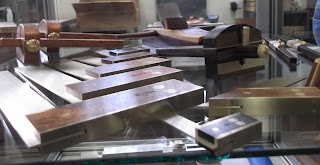 Some of the tools on sale  and the man who makes them Colen Clenton. 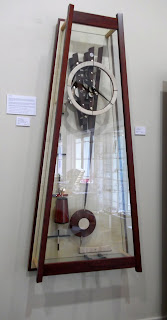 Sturt Gallery always has a range of finished items done by students of all their classes on show. Weaving being another class.


The Box using Through Mortise and Tenon with Traditional joints and wedges although not done in traditional manner. 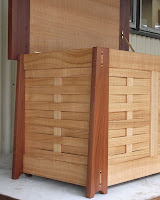 February 22nd to 24th
This year saw us book a weekend in Taree for Artisans On The Hill Open Weekend unfortunately on the Wednesday prior we had to cancel due to a weekend of impending torrential rain and storms and flooding. A pity as one of the Ornamental turners who has recently moved to the district was there demonstrating. Still news media had it covered well. Even at home it was wet and windy for almost two weeks.

A new show along with the long running Stitches and Craft Show was held at Rosehill Race Course. The bases not unlike the now defunct Newcastle Wood Show which also ran along side of Craft Fair. This gives hubby something to do while hours were spent with in a separate hall rummaging through all things Crafty by the ladies. We ventured over on Thursday arriving as the crowds of school students did also, we went our separate ways till lunch time. Although the Metal and Wood Show is much smaller than I expected it was still worth a visit and well catered for. I wonder if it will grow?

This is "The Axe" built by a local artisan from Windsor Niel has done an amazing job. 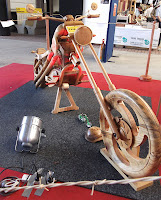 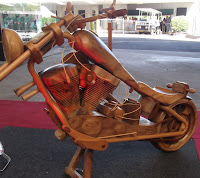 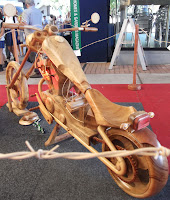 March 9th & 10th Kiama Woodcraft Group Show
This for us is an annual event a great day out although a small show held in the old Masonic hall the group put on an excellent display every year. I don't mind admitting my weakness in attending this event is to procure some small piece of timber from Boutique Timbers who make the journey from Rollands Plains near Port Macquarie yearly. As well as Jim Davey "The Plane Man", Traditional Tools Group, Steve? and his CNC machine.
This year the Jazz/Blues Festival was also held which is entertainment plus.
We usually meet up with the great fellows from OTGA these fellows are keen as they catch the train down leaving home as early as 6am meeting up as they alight at various stations to join up. We all head down to the Harbour for a fine lunch of Fish and Chips.

Boutique Timbers just a little bit of wood I will post photos later. 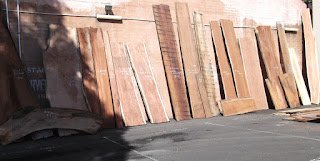 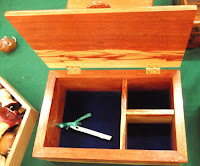 Some of Kiama Woodcrafters works 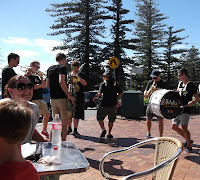 Entertainment plus these guys know how to work a crowd.
Hot Potato is their name.

A stroll after lunch, I was envious of the swimmers it was quite warm.

Oh I forgot to mention Oberon which was on the 9th & 10th February as this is our grandsons birthday we do not go any more. Usually rains anyway.


Posted by Raymond Sanderson at 23:09 No comments: Links to this post