There are many Wood Data bases on the internet, I found this one http://www.wood-database.com/ some time ago. It has grown to include a larger range of timbers as well a data base of allergy/reactions to wood and the dust. Yes you can get reactions to wood just by touching it even being in the same room or area. Wood decays and grows mould and mould spours float in the air with the slightest of a breeze.

It was suggested by a freind who suffers  asthma badly to do the search, after my 4 weeks of sinus and a 20hr visit to emergency for stomache and lower chest pain (short singular but 20mins apart). This warning does not discount that the number of viruses going round at present may have been the cause of my particular problem as stated by the emergency Dr.

It may have been brought on by the work I was doing with NSW scented Rosewood for about 2 months on and off. I know myself Rosewood is of  the Cinnamon family.

Edited 30th April It is for sure that I suffered a virus as Sue has contracted the same thing and a few others we know.

I always wear a mask sometimes even 10 minutes after stopping and when sweeping up, fine dust its the worst, I have a small 1hp dust extractor and a wet dry vac. Masks worn are a P2 and full double vented/filtered spray mask.

I am hoping a reaction isn't the case as I have a lot of Rosewood and love working with it.

When an apprentice an old fellow was having breathing difficulty he finaly went to see a Dr/specialist and was told he had by breathing in cement dust over the years caked his lungs with it. He had never worked with dry cement but had worked on concrete flooring and sweeping floors of his work area which had heavy vehicles and machines dragged over it. This broke down into fine particles, as we all used air for tools and to clean work with. A shot of compressed air it would sometimes billow the cement dust up apparently enough to cake the airways, lungs and indigestion system if swollowing while breathing etc.
It was after this we used to dampen down the floor enough while sweeping and changed the style of sweeping strokes if we couldn't. So please for your own safety and others who maybe about, use a mask for your own protection. Ask others to use one or move well away from the area until the dust settles.

I recently had Dot, a friend come over for a morning of felting. We had both been to a day class at Casula Powerhouse. I had been to a couple of felting workshops taught by Joan Fisher, founder of the Fairfield Spinners, Weavers & Dyers Guild and author of Exoploring Felting. Joan's methods differed somewhat from those employed at the Casula Powerhouse so I wanted to share my experiences with Dot.
Since Dot's grandson will be turning one in May, it was decided that a pair of slippers would be just the project to undertake. 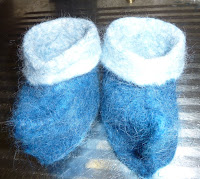 Dot already had a good idea of what was required as far as laying down the fibres was concerned. It was just a matter of how thick each one had to be and the correct order in which to put them down. We used bubblewrap as the resist and made both slippers at once.A slippery soap solution was used to get the felting process underway. This is where the kitchen sink comes into its own. There was no need for bamboo blinds, or metres of bubblewrap to felt.Just rubbing the slippers in the draining board allows the fibre to begin felting while you can insect the progress at any time. It also means that if somehow you have added too much soapy water it will just drain away without any mess on the floor. Within a very short time Dot had something which almost resembled two slippers joined together at the top. Cutting them apart. one slipper was worked on a t a time. The hardest part was getting them both the same size and shape. However the end result was a pair of slippers Dot is proud to show off and that hopefully Matthew will enjoy wearing. The slippers now have a bell on the toes of each slipper.
Posted by Raymond Sanderson at 11:53 No comments: Links to this post

The Scent of Rosewood

Open the workshop/garage door and the scent of Rosewood is hard to miss with making the 3 tier stand. I picked up more Rosewood from Boutique Timbers down at Kiama Wood show a nice size slab from which I hand cut another 14" blank for another platter.

Similar to the middle platter of the three tier one this is roughed down, a little more shaping to do yet. 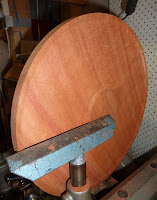 The Woodfast 4" chuck its mounted on I picked up at Hare & Forbes/Machinery House last Novemeber during their 3 day sale. I have not found any problem with it, no run out or vibration etc. Its ease of operation with it 4" jaws and single T-bar tool make it effortless mounting work.  The design of the dovetail jaws is excellent and holding power with even a small dovetail mortise.
Posted by Raymond Sanderson at 19:54 No comments: Links to this post

I obtained this old 6" bench grinder which was my father in laws who passed away a few years ago. This has now become a tool for forming ornamental cuts on turned articles. The base was removed and changed to operate the machine in the opposite direction. A good friend Ken machined up a shaft 4" with a 1/2" internal dia to hold 3 differnent size cutter heads (very much like long bore shafts on a machine lathe). The 4" may seem excessive with the addittion of the cutter head it will give me a versatile set up.

The two cutting head shwon here take 3/16 HHS tools Ken also made up a step down one to take 1/8" HSS. The fit of the extention shaft is tight with no play and no out of balance with the fly type cutter head attached. Thanks Ken for time effort and a great job.
Posted by Raymond Sanderson at 19:39 No comments: Links to this post

Jumping between jobs is something I do often especially when waiting for glue or stains to dry or as a break which gives my body a change and stops cramping.

This is a dry fit to see how things look and wht may need changing if anything. Sure enough the second teir column was out of proportion so an alteration was required. 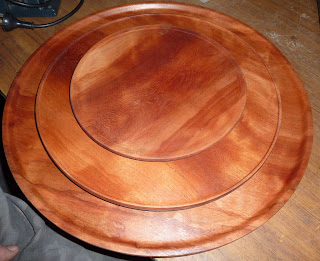 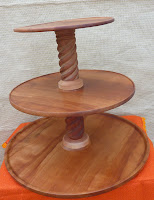 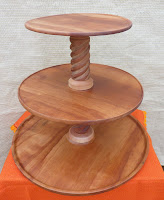 Posted by Raymond Sanderson at 18:37 No comments: Links to this post

Updating the blog has taken a back seat for while only because I wanted to post more than less of what I have been doing mainly because much of it has been time consuming.

The long drawn out progress of the Hebridian spinning wheel is I am happy to say at a stage I am happy with.

It has been assembled, all be it so I can continue. So I could fit the footman/treadle, sadly the old one was not in a repairable condition. Fit the legs, the tenon's of the legs have over the years shrunk in size so a wedge was fitted to expand and hold them in, not overly tight just enough so if it is picked up they will not fall out. One new rod for the footman as the old one had rusted away to a tapper at one end. Drill the holes for the rod in both the legs and footman. Stain match the piece of one leg which had to be repaired.... Stain the adjustment handle...Stain the footman to be inline with what was on there, I felt that this may have been a repair/replacement as the timber was Cedar not Oak which I have replaced it with. 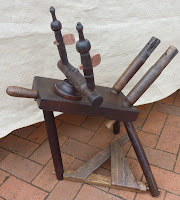 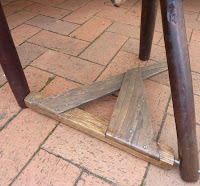 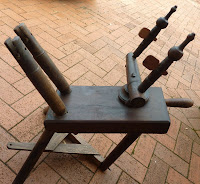 I made a new leather maiden/flyer carriers some time back and have fitted these and the maiden uprights to check alignment, same with the wheel carriers. There is a fair amount of wear on the uprights where the flyer has obviousy been running over the many years. This shows how much this wheel must have been used. Same with one of the wheel uprights. Hard to see in the photos is the repair to one of the tops of the uprights, the only thing holding it together ws one of the lock pins for the axle of the wheel. I did take photos of the repair I will try locate them and add it later. 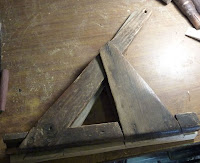 Left the old treadle with the broken/rotted section and splits. Right the new one. 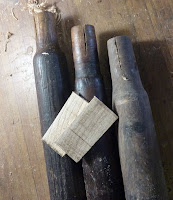 Above the three legs and two of the wedges used.

Posted by Raymond Sanderson at 18:26 No comments: Links to this post

A lovely young lady we know is into playing guitar, electric and classic. I have a number of friends and family who play also and they are always loosing or breaking their plectrums.

So while not feeling so well myself and with some nice Huon Pine and Rosewood of cuts I made a few for Danielle to try out. Hope they are ok.

These are slightly different in shape and thickness no finish as both woods have a natural oil and will over time (if they don't break, or dissapear) take on a patina of their own. 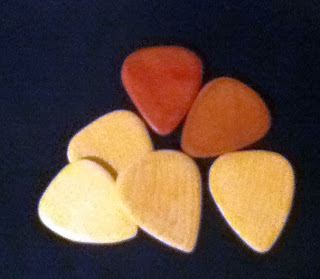 Photo via Danielle.
Posted by Raymond Sanderson at 18:44 No comments: Links to this post