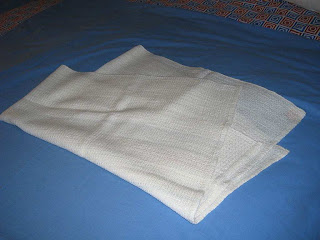 The baby blanket is finally off the loom, has been hemmed and fulled and is now awaiting the arrival of Christina's little bundle of joy so it can be delivered.
Unlike the other three woven blankets which were in a basket weave, this one is done in a twill. The warp is 2 / 20's white wool with random ends of a thick 8 ply baby yarn in white and varigated baby blue to pink. This yarn also have a nice sheen to it from a small component of nylon. The weft is entirely white 2 /20's wool. Amazingly the blanket hardly shrunk at all with a total of three centimetres lengthwise shrinkage and no width reduction.
I used a normal twill treadling but added two tabby shots between the four twill shots to give a different appearance. I was so pleased with the outcome that I plan to use the same threading and treadling sequence for a stole to be done in black wool later in the year or early next year depending on the time I have to get things done.
The spinning wheel will have my attention for a while with wool to be spun that has recently been dyed using some wood shavings from turning projects and some dyed using elderberries.
Posted by Raymond Sanderson at 21:39 No comments: Links to this post 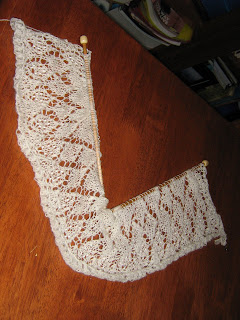 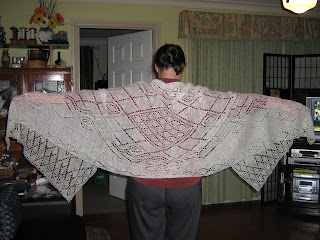 Its about time that I got on to doing this - so here goes.
The scarf exchange project was posted off last week. Thank goodness that is now out of the way. Everyone told me I was mad for putting so much effort into the scarf exchange when all most people ever get back is rubbish. I don't think like that so I hope that the person who gets this stole will appreciate it and others realise that just because its a scarf exchange it doesn't mean you can't get something nice back. Of course it took MUCH, MUCH longer to finish than I expected but I think that it was worth the effort. Much to my disappointment the daughter didn't fall in love with it so I'll just have to try out another pattern for her wedding shawl. 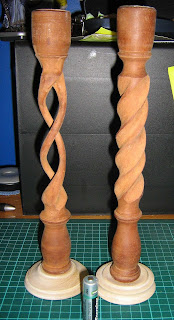 Fortunately a surface decorating day came up after the stole was sent back to WA so had time to enjoy some woodwork. Nothing much goes to plan these days and the little mini lathe that I was using to demonstrate miniature turning threw the drive belt but thanks to the owner's bag of tricks it was up and running again in no time - but only temporarily. This time it really spat the dummy, shredding the belt completely. Still, it didn't get the better of me. Fortunately I was able to do the Jacobean candle sticks which don't require the lathe to be running but only hold the piece steady while I carved out the timber with a microplane. Not too bad a job for a first attempt and once finished off should be just fine.
I've got to say that it was a really great day with lots of ideas for future projects. Now I just need to find the time to put some of these into actual projects.
For now its back to the loom to finish off another baby blanket. This will be number 4. They are all slightly different but there should have been only three but that's another story for another time.
Posted by Raymond Sanderson at 22:50 No comments: Links to this post