OM The Piece Within 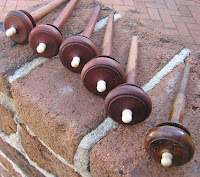 I was seconded into making some missing Sitar string tension knobs for a Tamil Sitar Alan is repairing a cracked Gourd on (Alan says turning makes him dizzy). I used NSW Rosewood adorned with False Ivory which was obtained through 043turning. I found the False Ivory very different to turn each piece I took the small knob from was in itself a different texture. One chipped quite easily while another almost peeled away. 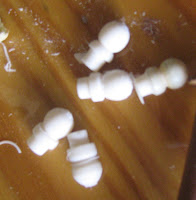 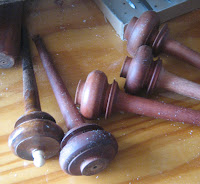 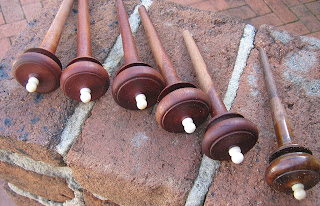 While on the subject of things from the the region at a recent Trend Timbers open day Richard Clark the owner had recently returned with what he called his tiny bit of wood. 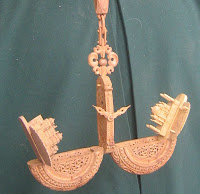 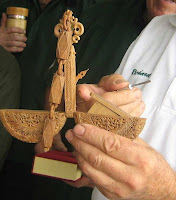 Posted by Raymond Sanderson at 21:31 No comments: Links to this post

There is nothing quite like making something for someone you know so I was delighted to be able to make this scarf for the sister of a friend. I had only the criteria of colour and fibre to go. Since the colour was to be red (who said there aren't a million shades of red) I thought that the recipient have some input . Janice lives in the United States and since Kool Aid is not only readily available there but is also much favoured for dyeing yarn  I asked that she could provide some packets for this process bearing in mind that there are various flavours of red.
I soaked some spun yarn for a short while in a mild detergent solution before adding the concentrated Kool Aid solution. The wool and angora had the cherry flavour added while the alpaca had the wild cheery added. At the same time I over dyed some wool with cochineal to give it more depth of colour since it seemed a little washed out. 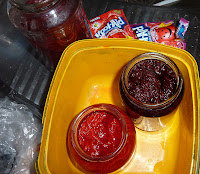 Fortunately the kitchen sink is stainless steel or there may have been some problems with the Kool Aid staining the sink a bright red. Rubber gloves saved the hands when handling the concentrated Kool Aid packets. 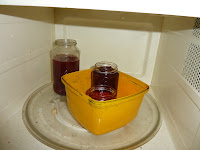 It didn't take long to dye the fibre in the microwave which is dedicated for non food use - either dyeing fibre or drying wood when Ray has a piece which hasn't had enough time to dry out properly before turning it and it fits into this fairly large microwave. 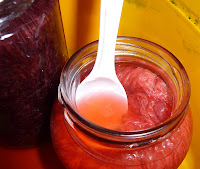 When all the dye has been taken up, the jars are removed and left to cool completely before receiving their final rinse and being left out to dry suspended from the clothes line.


The wool and angora fibre looks as though it has absorbed the dye liquid well but when removed from the glass jar some of the fibre remained white. This gave a slightly mottled effect but probably resulted from having the fibre too crowded in the jar. 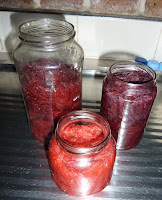 The loom is threaded up with random warp threads from the skeins spun. In no particular order they consist of Silk, Mohair, Wool combined with malamute, Wool combined with angora, Alpaca and Camel.The weft yarn is the wool that was over dyed with the cochineal. The loom here is set up without a reed which felt very odd to use as usually the reed is used to beat the work down but in this case the reed was too fine for some of the threads and would have worn them down to almost nothing causing breakages.
A wide toothed comb was used to beat the weft down. The finished product was fulled in the washing machine for a few minutes then hung out to dry.

Posted by Raymond Sanderson at 18:21 No comments: Links to this post

In the first 2 posts on Wool of Many Colours post one & post two  the process of turning  fibre into yarn and yarn into skeins to create the following Mobius and Helix Scarf for this years Scarf Exchange.

A Moebius is a band which has one face so that if you were to draw a line along its centre, you would end up back where you started without having lifted your pen at all, while a Helix is more like a coil and has two distinct faces.

The scarf uses the now very popular helix design which is also known as a ruffle scarf. The pattern was recently published in the Spin Off magazine. Here I used two balls which I had organised so that the colours would progress and then mirror back on themselves. This isn't an exact duplications as with any hand dyeing, there are slight variations in the bands of colour but I came as close as I could. The moebius was worked in a similar manner with the colours progressing through out though I was a little more difficult as there is a distinct lace pattern in this moebius which isn't normally used. A plain garter stitch is more common but I like a challenge. Here I have to credit Brigit Freyer from www.die-wolllust.de for her pattern "Wave of color". When I came to knitting this moebius, the number of stitches called for was insufficient for the size of garment I had intended to make so another two pattern repeats were added. This meant that I ran out of yarn before finishing the lace edging. Fortunately there was enough fibre left that I could spin up enough to finish. I hope that whoever receives it like what I have done with the fibre.

Posted by Raymond Sanderson at 17:55 No comments: Links to this post