Whats in a Name

We have a Scheppach Decoflex scroll saw, after using standard pinned blades for most simple type work, nothing fancy. We bought better quality finer unpinned blades through Helen Harris. PO Box 1384 Murray Bridge SA 5253 Ph: 08 8531 3440. The scroll saw was purchased through Cumberland Wood Workers club when I was a member supplied by  Hare & Forbes almost 2 years ago . It's has done some work of sorts, trimming material to small for the bandsaw such as pen blank ends.


I am impressed with the entry level scroll saw for a few reasons. Its light weight so easy to move about even though it has a steel cast sub frame and alloy cast work bed. Its robust enough not to wander around the bench, its additional light, height adjustable blower for dust and its variable speed control. Most of all it has an adaptor for a flexible shaft with 3.2mm chuck which comes with it. Of course this allows for drilling, sanding, buffing no matter where as long as there is power. The attachment fits straight onto a Dremel tool an added bonus.  It also came with a pinless mounting kit,  it was good with a easy to fit mounting set up on the top edge of the arm of  the saw yes there is a But! These had to be removed to change back to pinned blades, and protruded further in line with the blade. Helen Harris had available a adaptor to suit both blade types, once fitted it just a matter of changing blades.

Using a reveres skip tooth blade I made a name plate for our 2nd grandson for his 2nd birthday. Radiata Pine with an unknown hardwood back, left in the raw. I created the text using Corel Draw, printed it out and applied a light coat of adhesive removed after cutting.
Posted by Raymond Sanderson at 16:55 No comments:

I have done some research on the wheel I am making Sue, below are extracts of material I have found. I feel more at ease with the differences in design that I have in-cooperated knowing that each wheel is in essence made as a "One off".

It also confirms my first thoughts on seeing the wheel I am restoring it has to be at least 200 years old possibly more. Hand hewn using such tools as an Adz, Drawknife and Pole Lathe. Examples of their use can been seen here at Lithgow's recent IronFest wish we had gone now. The wheel should be a working machine even if it is to be sat in a corner and admired for its history, its unique to her descendants making it more an heirloom.

About Hebridean Spinning Wheels
Hebridean Spinning wheels are handcrafted to order and built using the same techniques as in the days of old. The distinctive Hebridean wheel, comprising over 50 separate components, is a unique design that has stood the test of time.

Until fairly recent times, the Hebridean spinning wheel was a common sight in every household. Generations after of crofting families kept sheep to provide wool for spinning into yarn for the world famous Harris Tweed.

The same care and attention that was given to such a vital tool of island living is today recreated by a few artisans who make Hebridean spinning wheels to the original design. Because they are custom made, no two wheels are identical, guaranteeing a unique and collectable replica spinning wheel to spin your own yarns on.

Measuring 86 cm (34 inches) from floor to the top of the wheel and 74 cm (29 inches) long, the Hebridean spinning wheel has compact proportions. Traditionally made from drift wood, today's replicas tend to be manufactured from sustainable forests.

The treadle-operated wheel turns clockwise to spin the wool into yarn, and counter clockwise to twist two or three individual yarns to a thickness suitable for knitting.

One of the distinctive features of the traditional Hebridean spinning wheel  is its 18 spokes. This is said to relate to the strong seafaring tradition in the Outer Hebrides, each spoke representing 20 degrees of the compass.

Quite apt when making spinning wheels occupied many a long winter's evening for storm-bound fishermen!

And with trees few and far between on the wind-blasted and rocky isles of the Hebrides, it was again to the sea that islanders looked for their raw material. Driftwood and washed overboard timber en-route from the States or Scandinavia formed the primary source of timber for the crofting communities in the days of old. Beachcombing was therefore a necessity, not a hobby.

In those days, timber was deck cargo and frequently lost in sudden storms that batter the Atlantic-facing west coast of the Outer Hebrides.

Being 35 miles off the north-west Scottish mainland, the Outer Hebrides is also directly in the path of the Gulf Stream. It is therefore a common occurrence for objects to beach here after journeys of many thousands of miles, including the occasional coconut from the Caribbean.

Below is a full explanation of spinning wheel parts from http://www.schachtspindle.com/our_products/reeves_parts.php

There are many plans for spinning wheels on the internet as well as in some old Practical Woodworker Magazines. Some Free plans of an Upright type of wheel have fun if you care to make one.
Posted by Raymond Sanderson at 16:23 No comments: 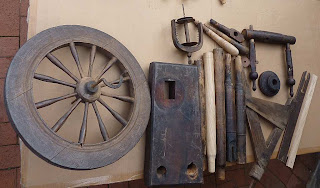 The Old I can at last feel some work has been achieved in the repair and restoration of the 200 year old Hebridean Spinning wheel. It had been shelved a few times, while other things took precedent. There is still work yet to be done mostly small but time consuming repairs to patch up areas for it to become a working wheel again. Also to keep it looking its age, not like its just had a make over and rebuilt.

New parts made are, one leg, one adjuster knob/handle. The old one has been repaired drilled and dowel inserted to strengthen but the thread is so worn that it won't pull back. So a new one was made. The connecting piece for the treadle. 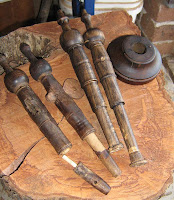 Repairs have been done to a Maiden tower, rejoining one of the lower sections using the dowelling method. The Maiden support block which had split was soaked in a soapy water solution for about an hour a hose clamp fitted for a period. It closed the gap from 6mm to 2mm, epoxy was used to glue and secure again using the hose clamp until dry. Drilling out the remains of the broken leg from the base.

Repair the broken wheel carrier upright, a small dowel and epoxy. A piece yet has to be fitted to both of these as years of ware has made a big impression into the wood where the axle has run. 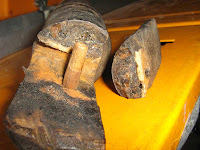 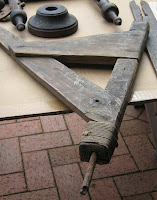 The footman and treadle is made of Cedar and has been repaired a few times as any cottage worker of the day would have done simple but effective. I will decide as i go if it should be replaced or repaired.

I was fortunate enough to acquire a 2nd hand Nova 3000 lathe which I was able to turn the larger parts on such as the legs and wheel carriers for the old and new spinning wheel. This was a slow process as due to the size of my workshop/garage, the lathe could not be brought home. It is housed at the Ornamental Turners club at Llandilo some 45ks away. This meant that limited time only on a club day at the lathe to produce 3 new legs, 2 new wheel carriers etc.

Seen here is one of the legs on the Nova I had turned I wanted to do a fancier type leg compared to the original design this is just a simple coves, beads and tappers 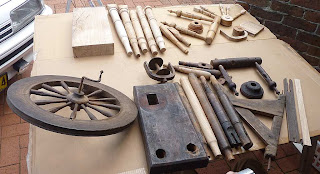 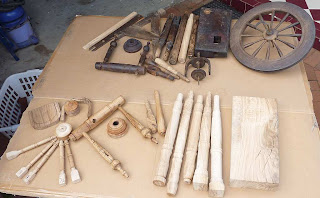 The old wheel and all its parts along with what has been made so far of the new wheel. Shown of the new wheel from right to left :- The base, Wheel carriers, 3 legs, adjuster knob and block, riser block, Maiden and its towers/flyer carriers. The hub and 5 spokes (7 more yet to make) a roughed out flyer and two of the pulleys.
The base has yet to be worked, holes drilled, adjuster block slide hole cut and drilled. A tapper on the underside. Adjuster parts to be drilled and threaded with a more common thread type.

Metal axle forged for the main wheel and a machined axle for the Maiden made.
The pieces which are darker have been given a coat of Woodwipe which is available through Trend Timbers , a liberal smear after sanding of Lanolin and cloth buffed a further finish will be applied. 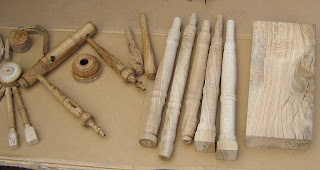 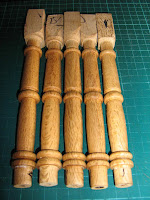 The spokes also had a make over I created a profile after doing a rough test run and getting approval from Sue.

The Maiden towers were sanded back after having been aged to suit fitting to the old wheel (see above Old Wheel), should the repairs not have taken. It has brought out some interesting colour and effect. 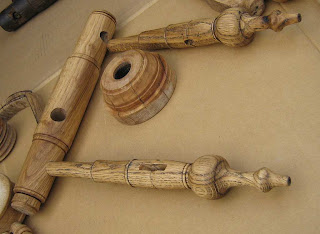 Sue asked if the new wheel could be left its golden colour after showing her how it would look it won her approval again. It will darken over time. 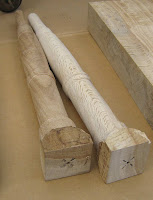 The spokes laid out around the hub, the wheel carriers and the 3 legs all yet to be completed, getting the shapes sizes, filling cracks etc is taking time. Even though the Oak has been down for over 5 years after being cut there is still movement also after rough turning.

Posted by Raymond Sanderson at 15:13 No comments:

Art in Relief or Tromploy

At a recent Ornamental Turners meeting one of the members Peter Harding, brought along a purchase he had made of Christ. Peter isn't a religious man but it had moved him so much some weeks previous he went back and bought it.

No matter which way you move the work Christ's eyes and expression follows you. 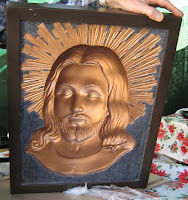 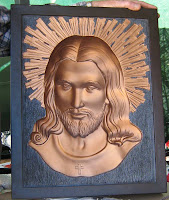 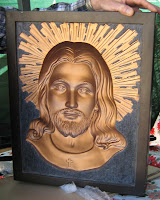 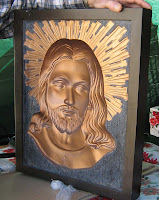 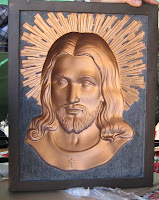 Posted by Raymond Sanderson at 14:05 No comments: 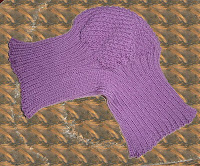 Sue made this for her mother. A nice purple Knee cap from an old Mrs Beatons NeedleWork Book
Done in the round using 4ply yarn from Bendigo Woollen Mill
Posted by Raymond Sanderson at 10:33 No comments: