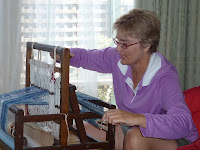 After receiving two scarves  my name sake wanted to try her hand at some weaving. The idea was to set up the loom with the warp ready for for her to start one for a friend. Having chosen a blue colour scheme using wool, acrylic and mohair, I set up the warp so all she had to do was the actual weaving.


It didn't take too long before she was confident enough to work unsupervised, leaving me to wash up the lunch dishes, serving coffee and biscuits and getting the odd bit of spinning in. 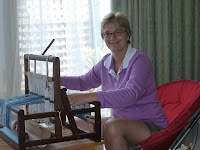 The odd break from weaving left her time to read out the revisions to her first manuscript as yet unpublished. A few days and another bobbin of yarn for the weft spun up hurriedly and the scarf was finished. Cut from the loom and fulled. Now this scarf is ready for its new owner.

Posted by Raymond Sanderson at 16:05 No comments: Links to this post

A fellow wood turner in the UK made some Lucets, Mark made his from a variety materials.  Mark is into a variety of works, hobbies and motorbikes. Browse his workshop.

Today a parcel arrived from the UK Mark posted Sue one of his lovley Tortoise Shell Lucets. Thank you Mark it will be treasured.


While showing Sue Mark's work it reminded her I had not made replacement ones lost and broken and I had been asked some time back. So the scrollsaw got a work out making two one with a handle one without. Both English oak. 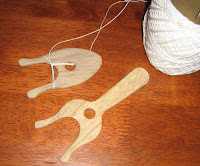 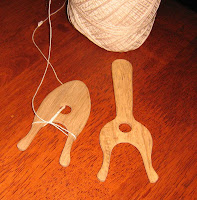 Posted by Raymond Sanderson at 18:29 No comments: Links to this post

Hair of the Dog

Recently Max our Foxie had to have surgery due to an in-grown hair between one of his hind quarter toes. An expensive situation starting with the Vet trying applying a cream to draw out poison and a tape bandage for a few day's. 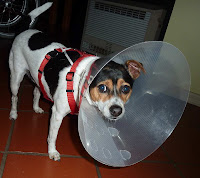 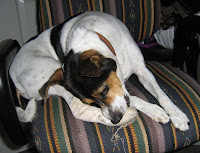 Max was good he left his bandaged foot alone and only the day prior removal did he really try get it off.


After the bandage was removed he had to wear an Elizabethan collar. The Vet had to fit one larger than normal as he could reach the open wound, stich  and drain that was still in. The colar was so heavy and big we had to leave his harness on him so Sue could tie it to it to help hold it up. Being a Foxie made him look like the HMV symbol. We did how ever find that his barking reduced as the cone effect echoed so he stopped barking while wearing it.
He's better now.
Posted by Raymond Sanderson at 17:54 No comments: Links to this post

In the previous post is the fibre which I dyed. I then hand spun the fibres and plied them to produce a two ply yarn, using my Sickenger wheel.


I set up the weave on my Two shaft Dyer & Phillips PL loom. This loom is one I was given by Joan Fisher who had purchased it through Anthony Hordons after the war.

Its a plain loose weave similar to the previous scarf. The warp is wool, wool and Mohair, silk and linen. Colours were requested by the gent the scarf is for.