My neighbour Wayne drops in usually on his way to work no different this morning except I wasn't in much of a good mood and I was involved in a situation checking the Myford out.
Wayne asked if I'd noticed the log up the road, I had not nor had Sue as she had not taken Max that way for a walk. Anyway Wayne offered to bring it down which he did 800mm x 250 at its widest point fresh cut as it was still ooozing sap. Looks and smells like a form of Juniper.
Many thanks Wayne.


Then about an hour or so later Fletty calls around with my two pieces of Mallee Burl he picked up during his recent trip north to Rollands Plains where Boutique Timbers and a number of others were holding a Timber Auction. Alan had SMS'd me with a photo and hinted I may like a few, he chose to beauties. 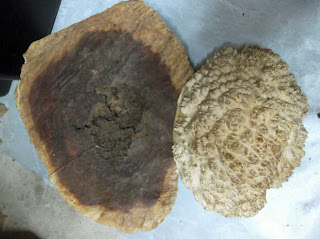 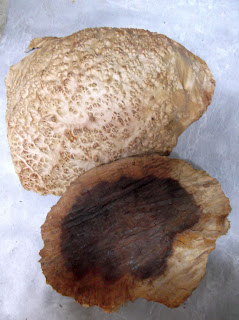 Posted by Raymond Sanderson at 21:21 No comments:

Nathan our grandson asked if he could have a go at weaving, having watched Sue spin some fiber. Sue set up her 2 shaft loom and showed Nathan the procedure. Over a period of visits Nathan completed weaving the scarf to give to his mum (Jaclyn) for her birthday.

Nathan became so efficient Sue would just put the loom on the coffee table and he'd continue without supervision only when he asked for help or for it to be checked did anyone assist him, not bad for a 5 year old (nearly 6). 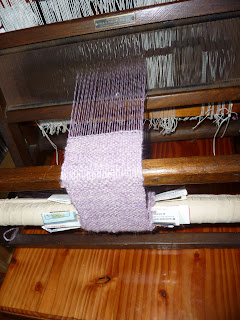 Posted by Raymond Sanderson at 21:07 No comments:

Having started this process Izzy has turned the yarn into a Crop Cardigan, I then washed and blocked the garment. This is to be sold.

The fawn coloured fiber in the photo to the left and the same on the right. 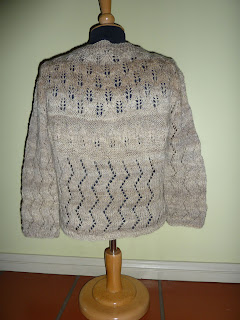 A beautiful job done by Izzy.
Posted by Raymond Sanderson at 20:43 No comments:

Alan was making a box for a little girl which I became involved in, I made some ringed divider sections out of some beautiful Huon Birds Eye Burl Alan supplied. I decided during the making of those to also make a couple of additional bits. Some bangles/bracelets or shawl rings and hair pins/shawl pins. I had some Rosewood similar to that which Alan had used to make the body of the box. 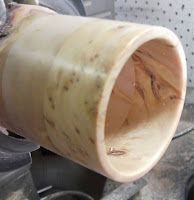 Alan had to laminate the Huon to achieve correct height for the rings.
I turned these down to 7mm wall thickeness.

The two Bangles standing upright side by side lower right. The Rosewood pins and bracelets. 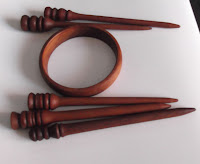 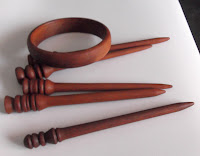 Posted by Raymond Sanderson at 10:11 No comments:

A Change to Metal Work

Some time ago Alan past on to me his old Tormek Super Grind as he updated, many thanks Alan. It has been used often on my turning tools, and some kitchen knives. In using it for bowl gouges etc I had to buy a usable kit as Alan doesn't turn roundy bits.
So I purchased the Scheppac Wet Grinder Wood Turner attachments based on price as Tormek is to me greatly over priced.

In using the bowl gouge jig mounting bracket I found it to say the least over sized and poorly designed, it gives little room left to move along the bar when sharpening/honing the tools to shape.

This is the Scheppac jig mounted on the bar.

I had a piece of steel block which was almost ideal shape, a second hole drilled for the jig shaft of the main tool holder jig.
A bit of shaping to round off the edge nearest the grind stone a spot of linishing to brighten it up and round the edges. 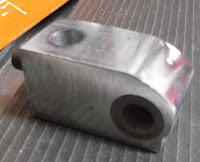 I left a shoulder as a buffer.

Instead of retaining the two locking rings I drilled and tapped a 6mm hex head bolt into the block to lock the position of the tool.

I used a piece of Modwood, off cuts I had been given, to reduce the 17mm hole already in the block to 12mm and this gave a better sliding surface along the bar. Modwood turns easy and has a great instant finish to it, can be shaped well and drilled and tapped. Its a mixture of wood and plastics mainly used for decking. Below the two parts sitting side by side as a comparison. 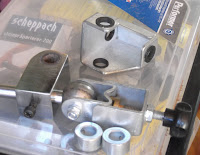 A quick job for Mark some lock plates for his roof bars had to cut the plates and drill 4x13mm and 4x9mm. 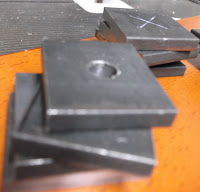 My first turning job on the Myford just a simple clamping post fo the SCMS (sliding compound mitre saw). I was not happy with the original height or he length of the clamp block as it wouldn't allow large timbers or work with short timbers being put through the saw. This when I make the extended clamp block will give me one each side of the blade a much safer holding format. 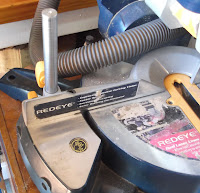 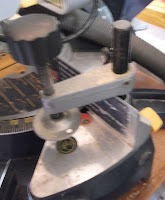 I was doing a web search for something or other in regards to spindle adapters for the Nova 3000 and came across Nova's listing which indicated they had an adapter J 1 1/8" x 12tpi which is the spindel thread of the Myford and is listed as such. An email to Trend Timbers and Adrian responded they had one in stock it arrived today and fits like a glove a test run with a Nova chuck for true running and all is well.

Why would i want a Nova chuck on my metal lathe? All will be revealed as time goes by.

Posted by Raymond Sanderson at 23:13 No comments:

My darling wife has been busy as always with a variety of carding, dying, spinning and knitting with in it all still maintaining a house hold and looking after my needs and assisting me all to often.

She started these last year and got them finished just as temperatures dropped during the week her own pair of socks.

A request for another Lap warmer from Peter and Sue Crook. Sue had made one for Sue previously .Sue used some remaining fur carded and blended with Merino and made two instead of just the one a little large than the last one. 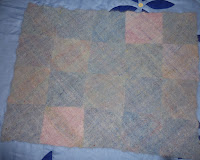 I won Sue this beautiful Glass Pendant made by Christine Calabria from Artisans on The Hill recently they were running a give away from names of registered people on Facebook on their page there. Thanks Christine Sue loves it has teamed it up with a nice Silver chain.

A call for help from her long standing closest friend Antonia to help her daughter with a school project for Textiles. They had them come over for a day with Sue and produce this lovely wall hanging. Young Natalie did all the work guided by Sue . 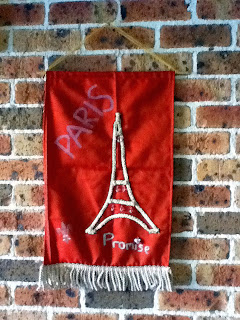 Posted by Raymond Sanderson at 22:17 No comments: