Being a member of the Ornamental Turners I approached one of the members David Liard for some expertise in turning threads to repair and re-make the tensioning knob. David took the job on without hesitation and informed me when he'd handed the completed job back that he had only just restored/repaired a similar wheel recently. The old knob seen on the left was broken just above where the thread finishes. David drilled both parts and inserted a dowel and glued it together. The new one was made as the threaded section of the old one is so worn it would not have worked in adjusting the wheel tension.

I set about copying a new castle ( the old part seen below) for the maiden carrier using English Oak as David has done also, to keep the wheel as original as possible I will also repair the broken parts.

Matching the colour and years of use ( think they prefer patina) was to be less difficult than I first envisaged the process took a while but it slowly came about to a match. Its difficult to reproduce 200 years of dirt and grime Lanolin from grease wool. 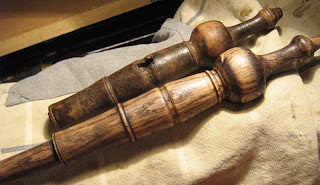 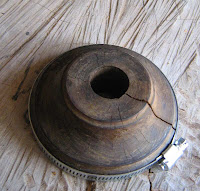 The Yoke which support the Castle was split it has been soaked in a soapy water solution for about  1hour and a large hose clamp fitted to try bring it back as close as possible to be able to glue and pin it together.

Posted by Raymond Sanderson at 17:59