Progress of the Spinning Wheel Restoration

Over the last two months I have been slowly working at the Hebrides Spinning Wheel restoration again.

Here's some of the work so far.

I went into production mode to produce nine Bobbins. Three for the Old wheel and six for Sue's wheel. Oak ends and pine shafts. All cut, drilled, glued and roughed down. 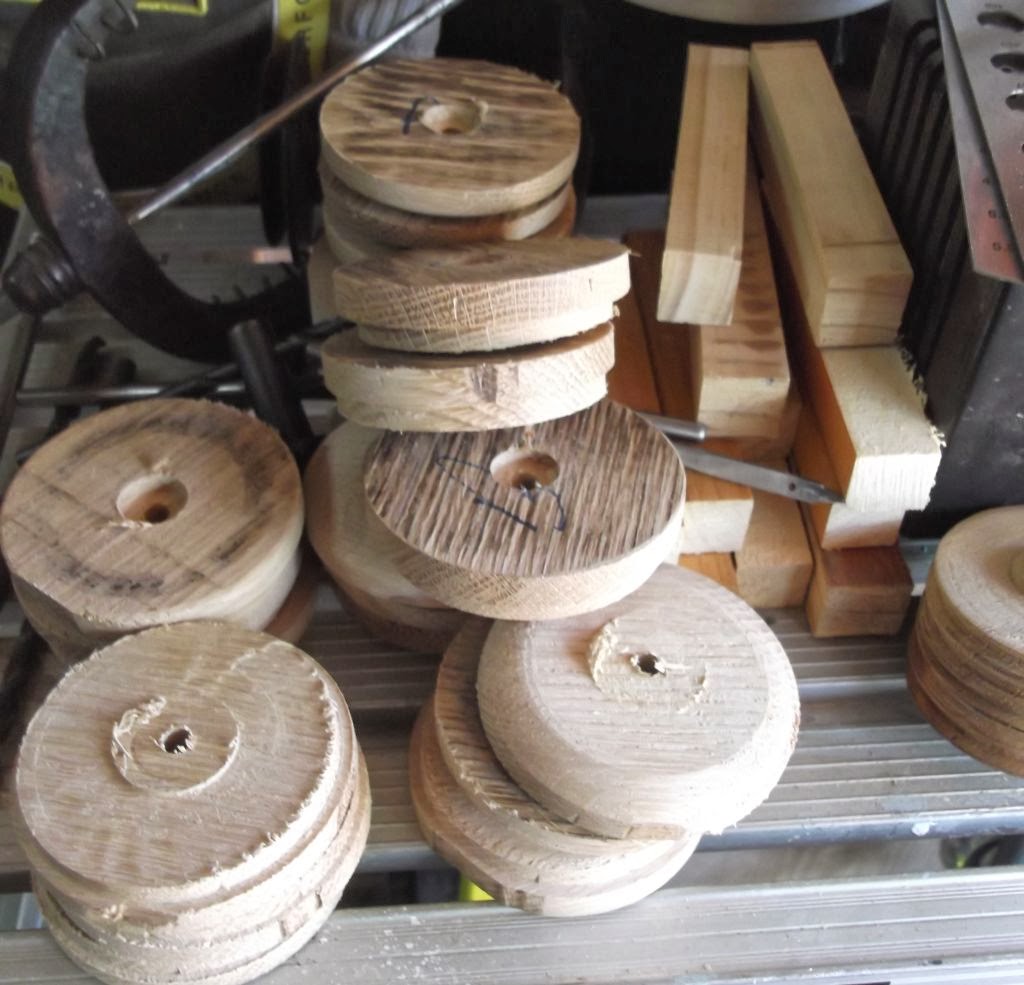 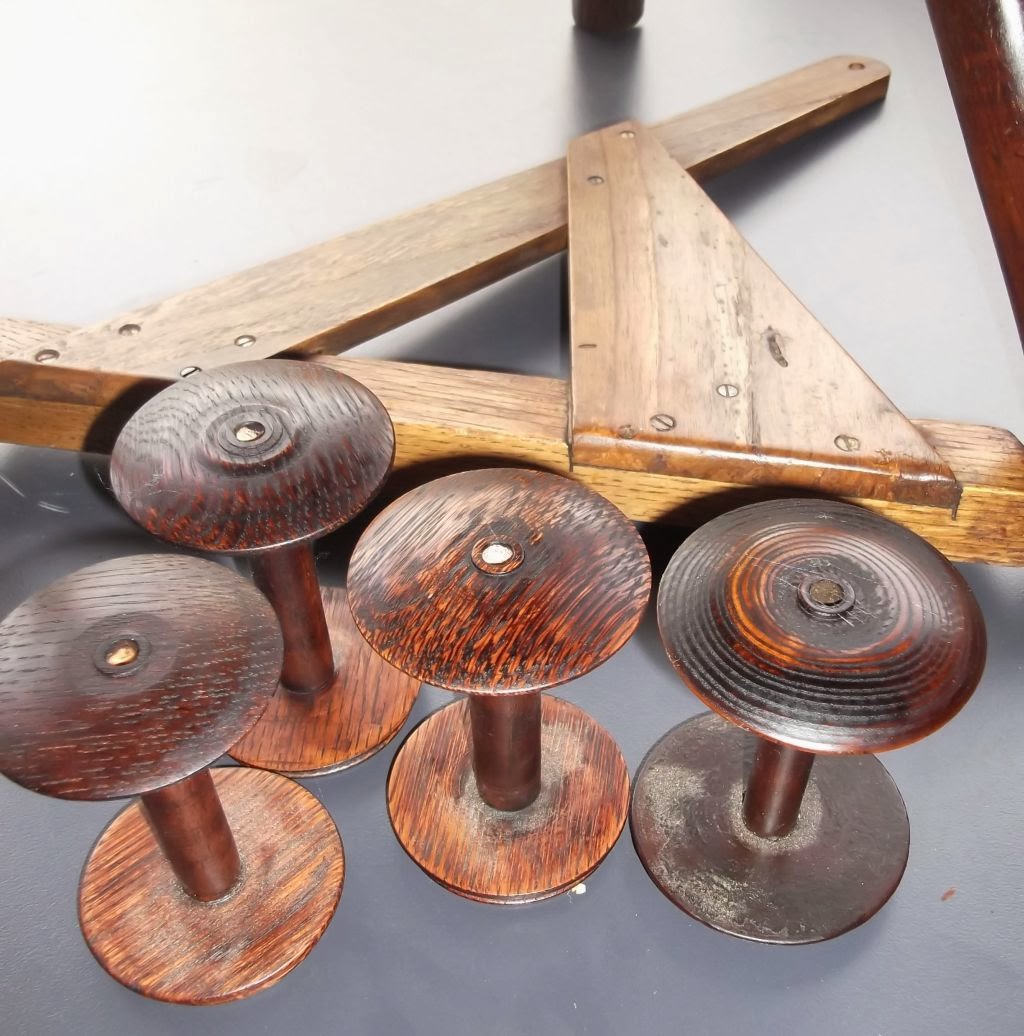 I finished off the three Bobbins for the old wheel, staining and using Danish Oil on all four. A coat on the footman as well.


Next was trying to straighten the hooks on the flyer, they were badly rusted and I used a wire wheel in the Dremel to remove that. Three were so bad and thin they broke at the bend, in trying to remove them they snapped off at the base and the last one I tried to remove had rusted itself to the Oak. This caused the arm of the flyer to break. A repair was done. To try remove any of the other hooks would have caused further damage. It would have meant a full replacement of the flyer, I cut them off all the remainder and replaced on the reveres sides with new hooks.

You have to recall this was a Flax wheel and when spinning Flax water is used between the fingers while feeding it in, hence the ware on the hooks, orifice and the timber. 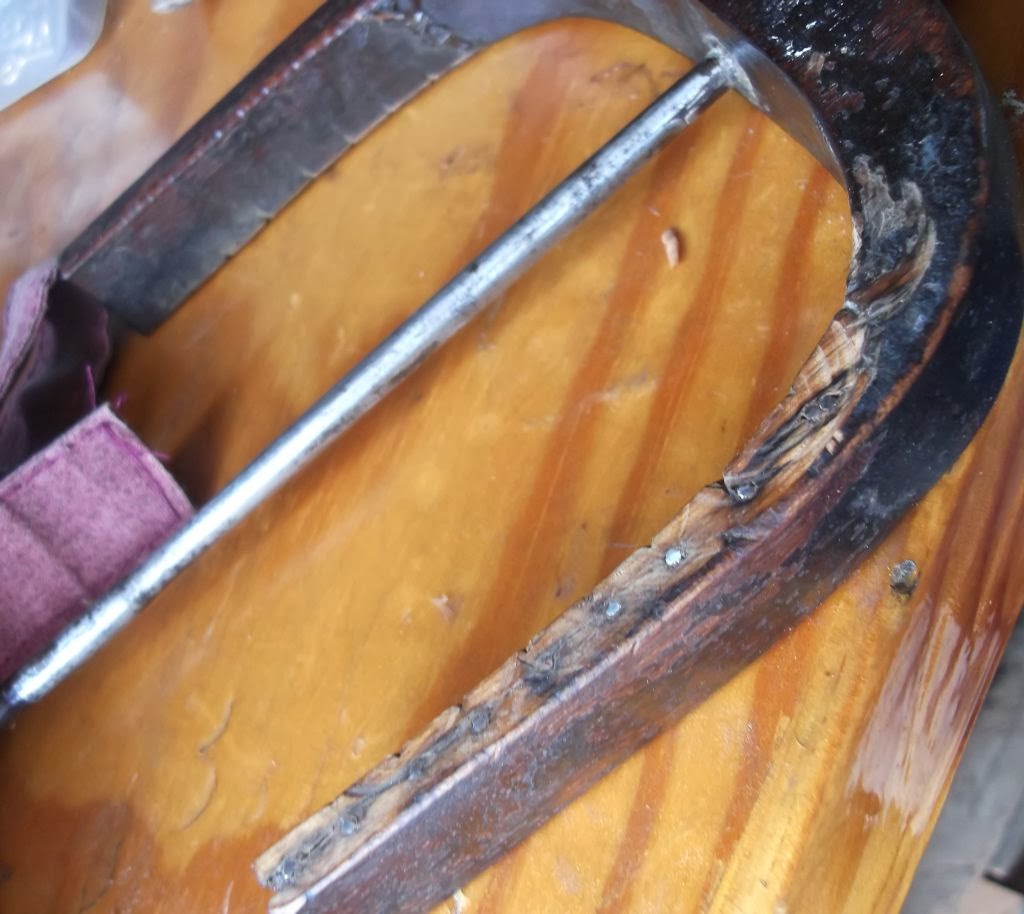 In the photo above showing the repair I had glued you can also see an earlier repair has been done just above.

Below hand drilling pilot holes for the new hooks on the opposite side to original hooks. 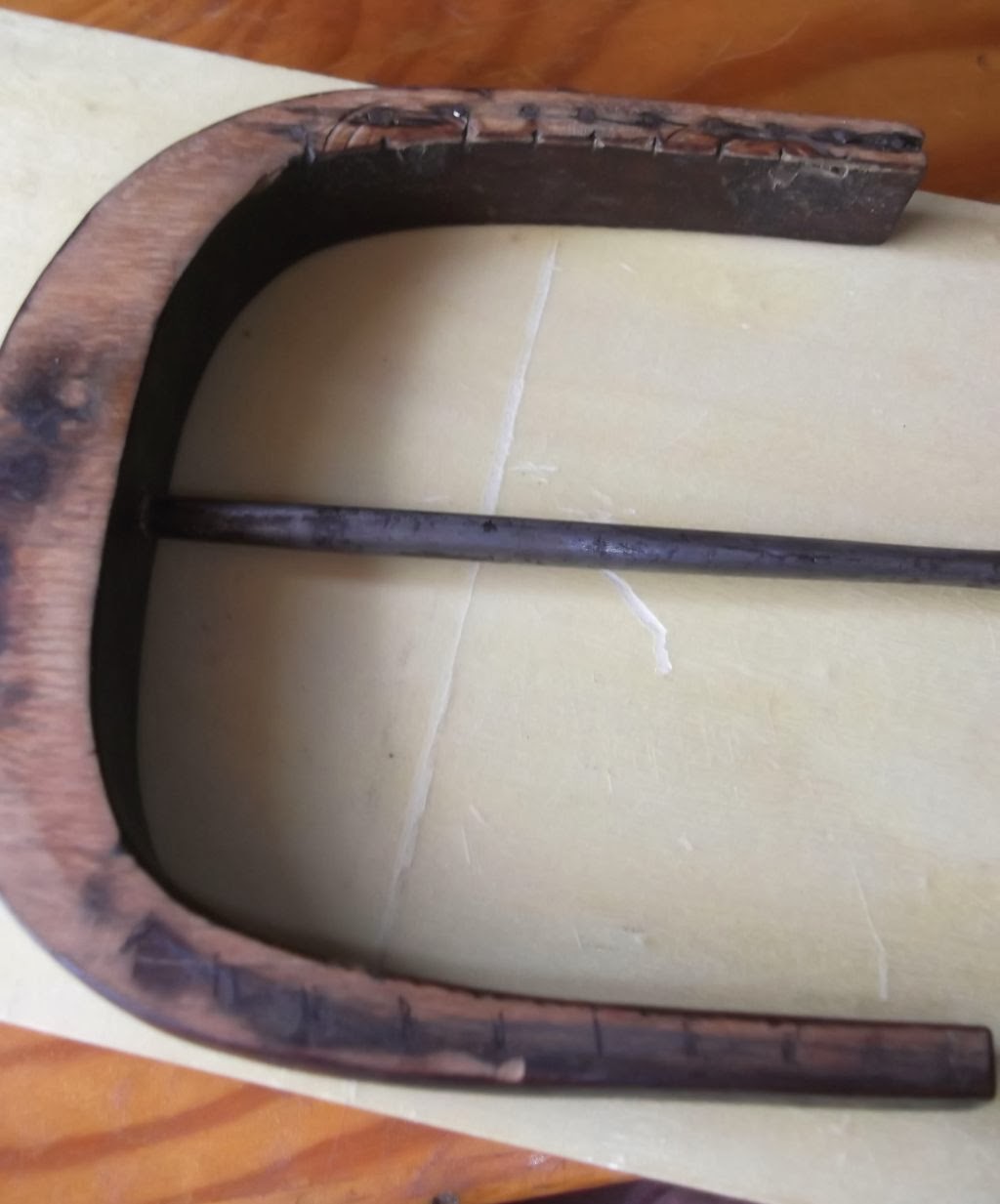 While cleaning the hooks I also had to clean the rust and scale off the shaft and orifice. 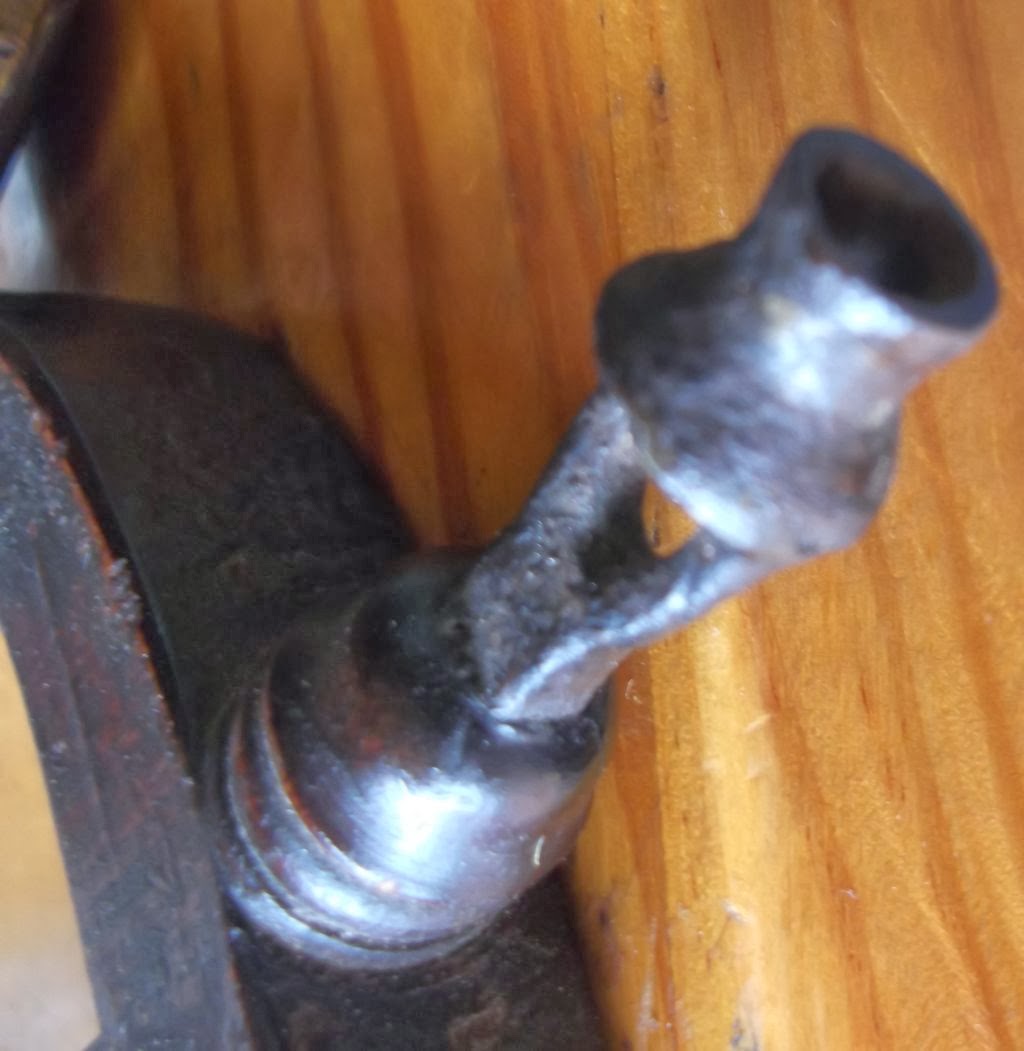 Photo below after wire wheel had been around it.

The original Treadle was made from Cedar and had rotted so much the shaft and wood around it had been roped together there was little shaft left on one side so I replaced both shafts.

I made the new treadle/footman up out of English Oak in the style of the Cedar one which I doubt was original at all.

It all had to be lined up and drilled the holes. Epoxy the shafts into the treadle.
I had to decide what to do with the leg as it had been re-drilled a few times and shortened making the balance of the whole wheel off kilter. I turned up a longer piece and attached it as can be seen in the photo below.
This join proved to be a real problem as PVA glue didn't hold so Epoxy was used. Its in a spot which will get a lot of torsional action with use of the treadle. 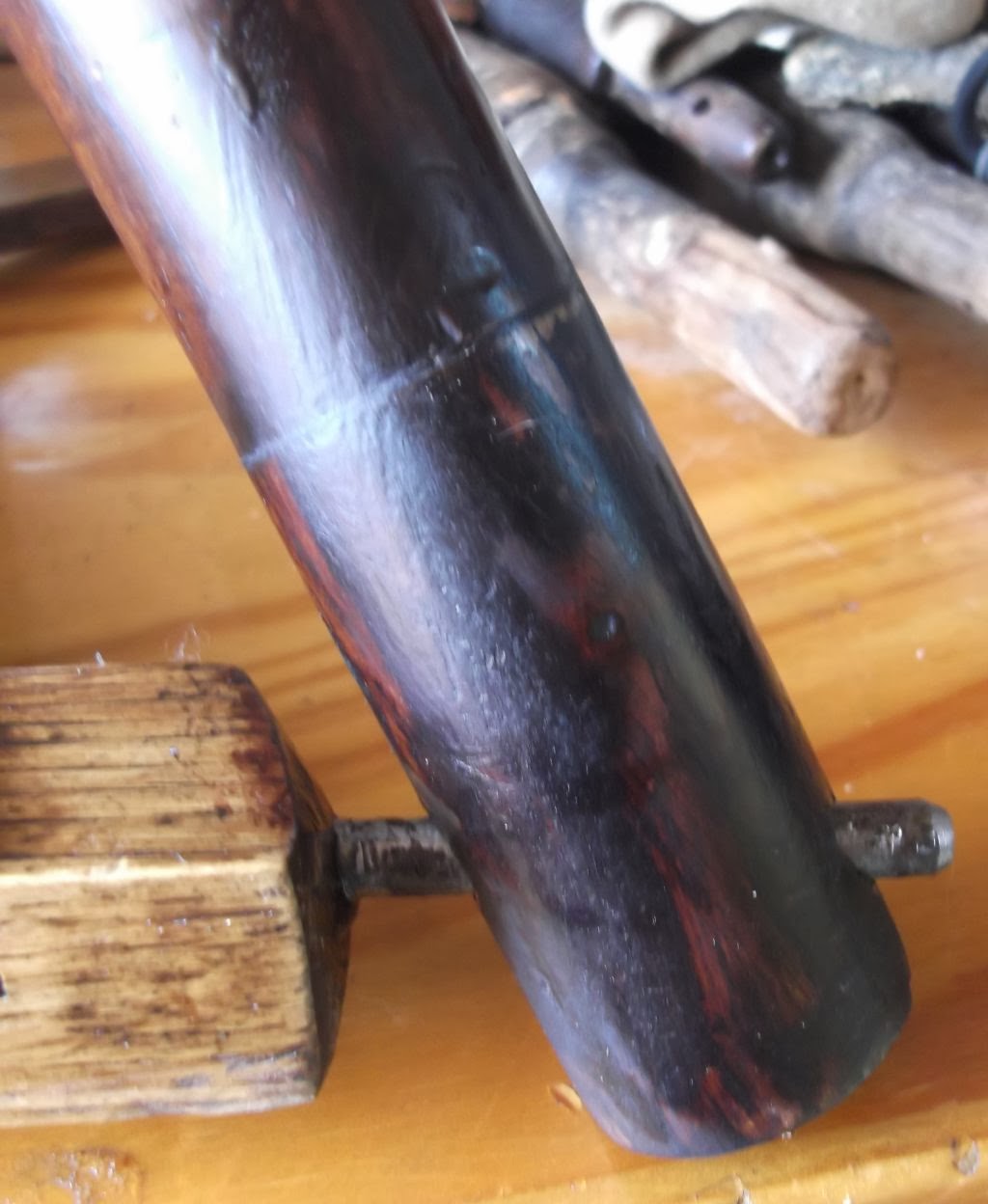 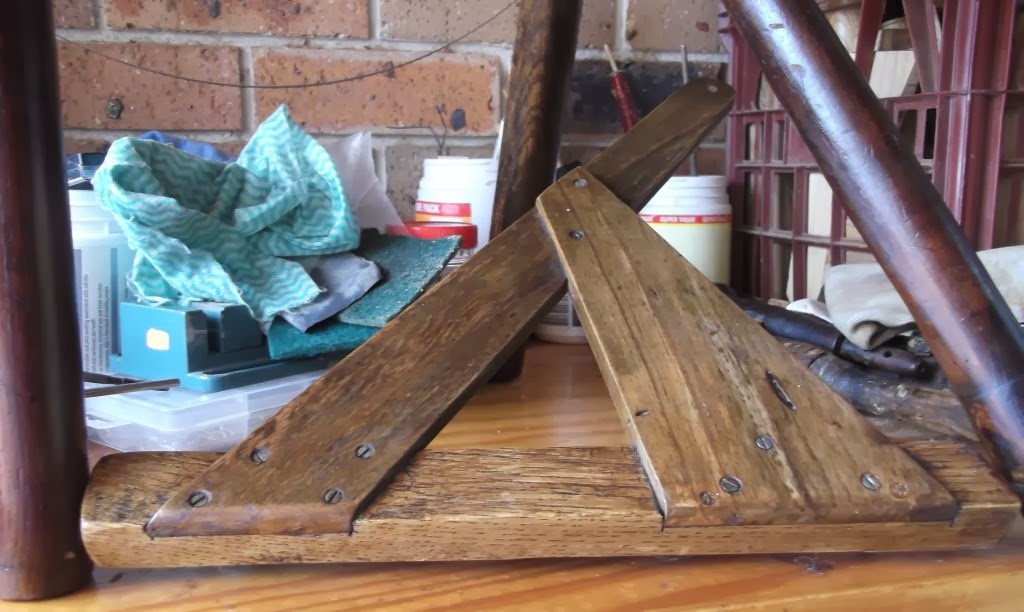 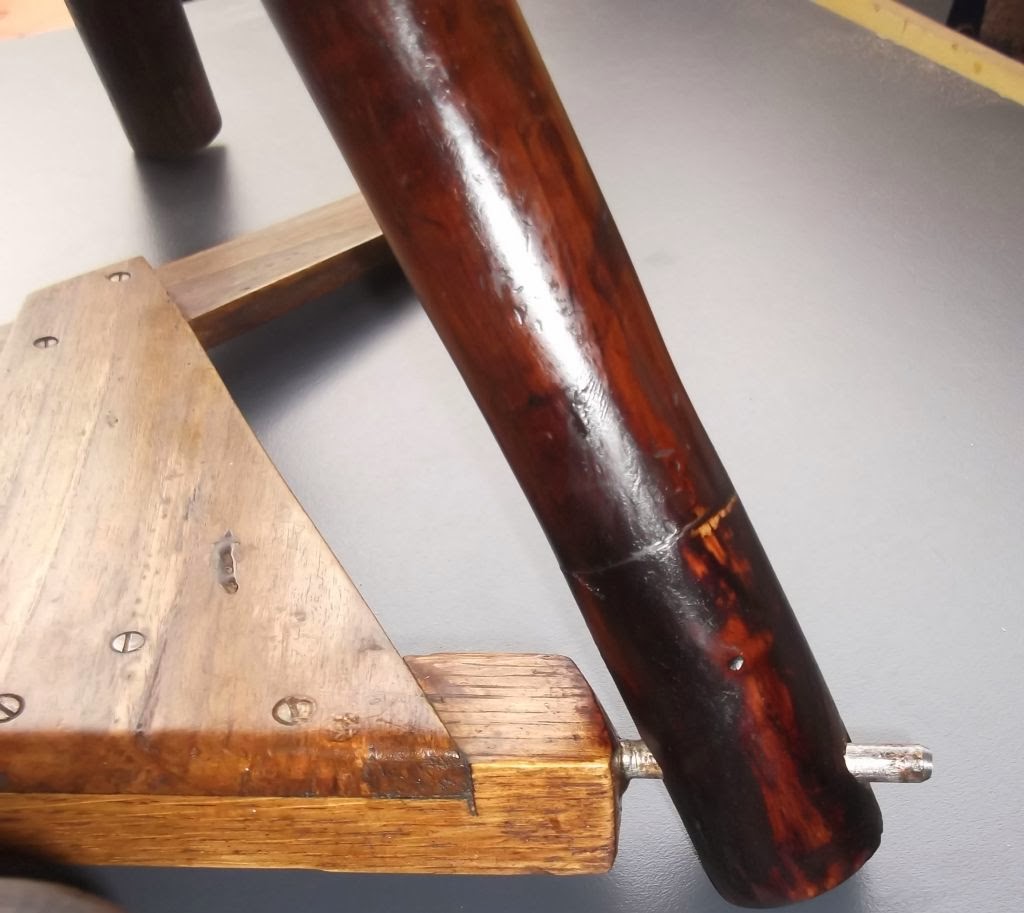 Below is the join and the old end which shows the number of times it had been drilled and difference in size. 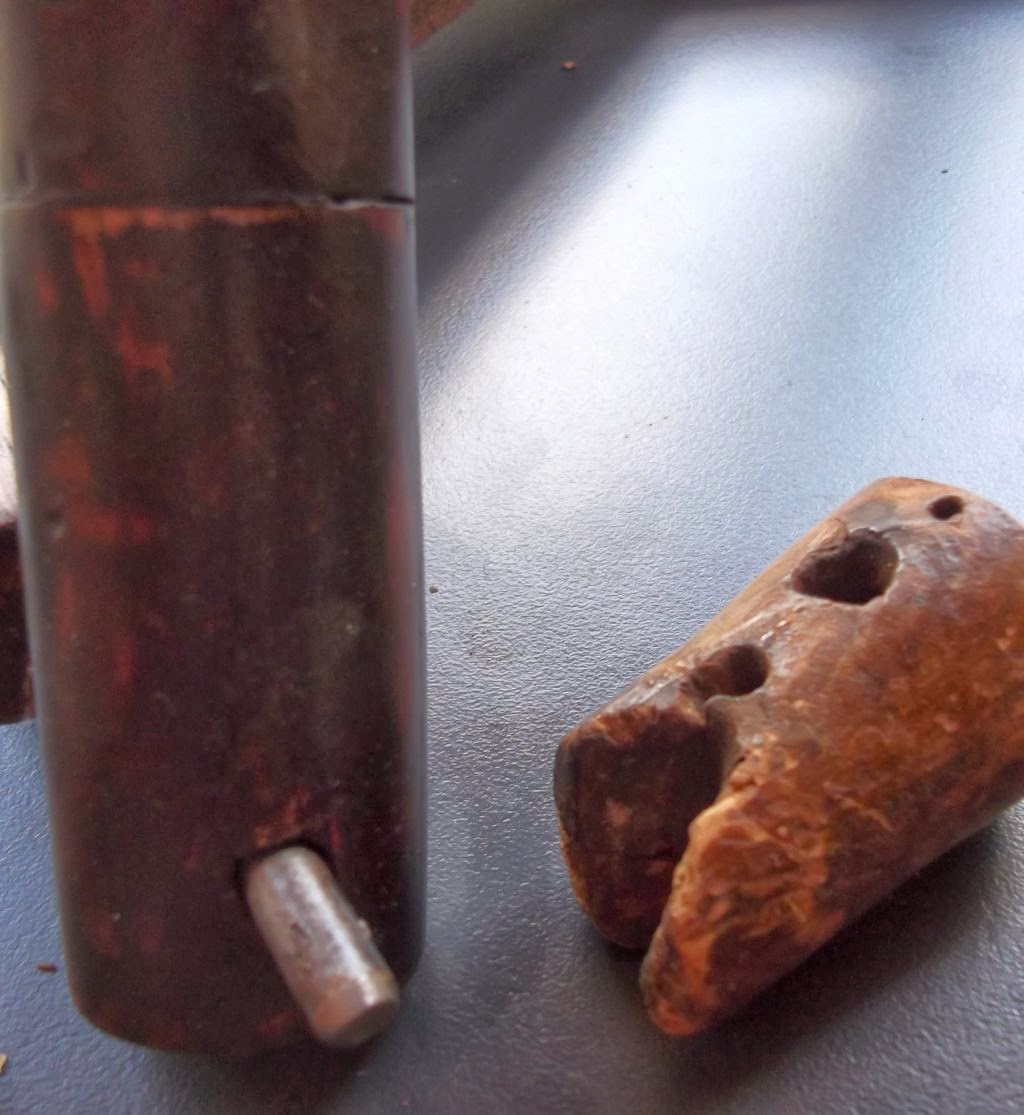 Below the Flyer and new hooks fitted, Whorl cleaned and oiled. 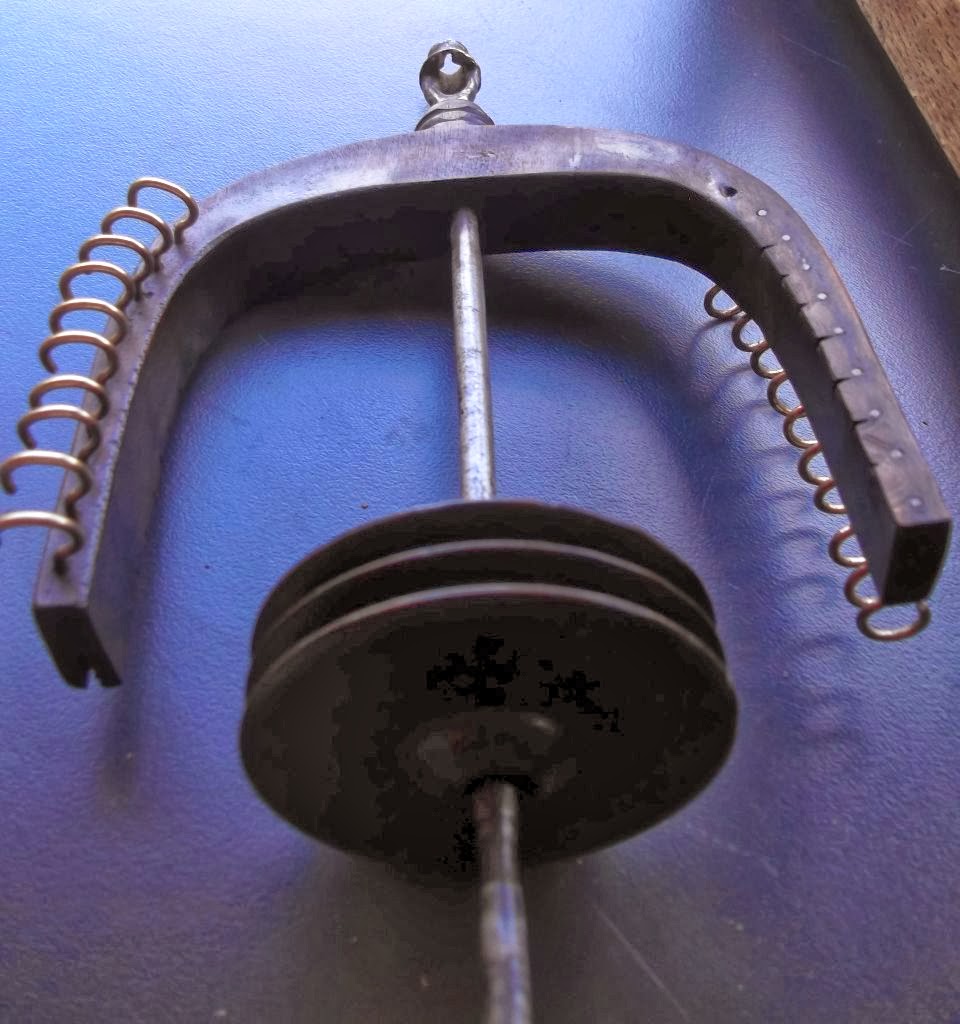 Below is the Old Treadle of Cedar, the left side shows where the shaft was exposed when the rope was removed. The Cedar piece crumbled away into 4 bits. 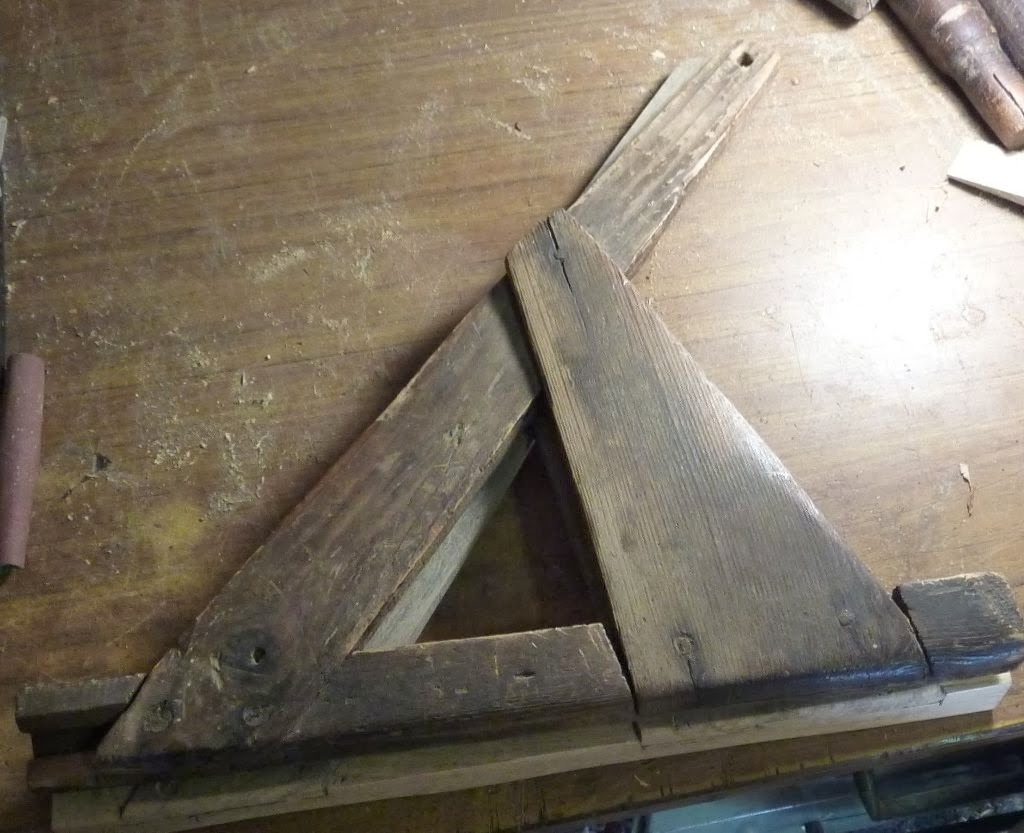 Below the New Treadle when assembled. I used a wash to try bring it to match the Cedar rather than match the main body of the wheel. 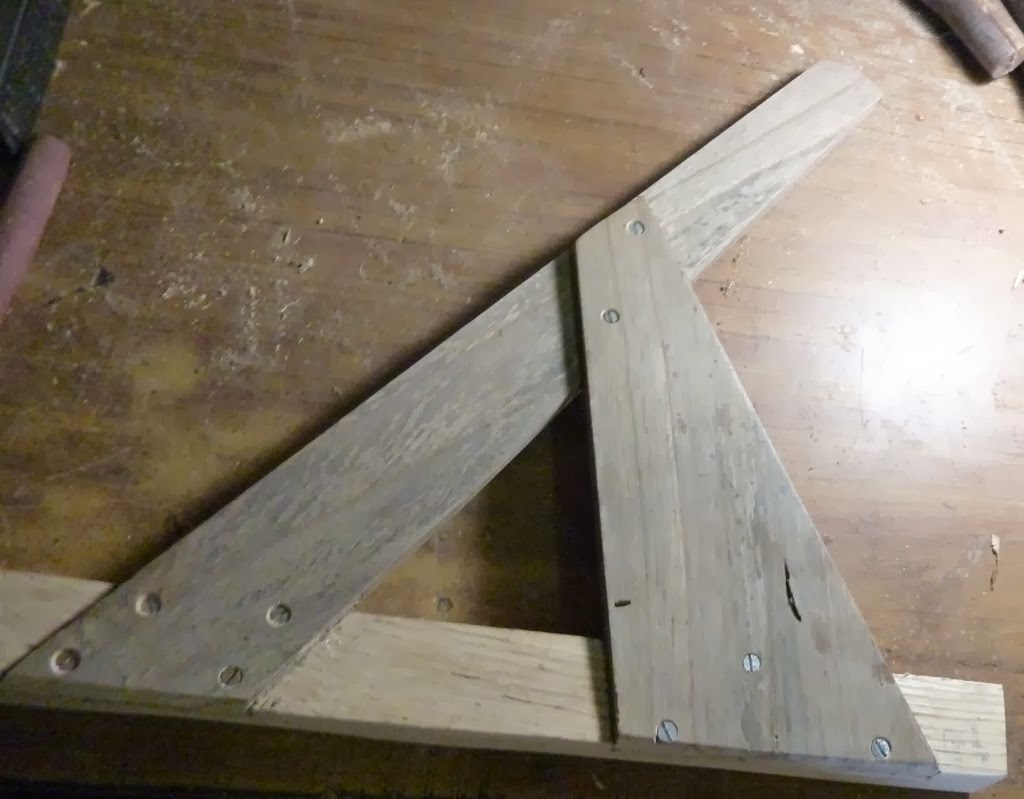 There is still much to do but its all small fiddly bits and will take time as glue has to dry then the area's need to be worked stained and finished.
Posted by Raymond Sanderson at 19:06