When I posted last back in March on the Progress of The Spinning Wheel Restoration there was still much to be done. I am glad to say I have been at it almost every day other than when we had our break for eleven days. Spurred on by the fact I could see it coming together even though at times frustration took hold, thats when I would take to something else for a little while taking a break to clear my head.

Oh yes the uprights for the wheel itself these became one of the annoying things I just had to sort out for alignment of the wheel to the Whorl.
Back filling inside the inserts with thin slivers of Oak glued in place and using a rasp to get an angle matching each upright so they would align with the Whorl.
Gluing of course takes time to dry as does checking again and again and again. Finally something near close enough.

Right: I used Cling film to protect the base of the upright from glue and it in turn applied pressure to the material being glued in place.


Then the wheel itself!!

The spokes of the wheel are mortised into the hub but are flush with the fellows and then pinned at an angle through the fellows to retain them. One of these had been broken and come adrift, a simple repair of using shavings to build up around the area of the pins (two in all) and laminating/layering with glue much like  plywood.

I mounted the wheel onto my large Cole Jaws and as best could be done took out as much warp as possible. I used CA in the mortise of the spokes and hub this helped tightened up movement and slop.

The Cole Jaws also allowed me to true the now well out of round wheel, due to years of drying timber and movement. In all not to bad but it was enough to throw the drive band off and the sides of the band area had been worn down badly through damage and use. The problem here is, was the hub central to the wheel etc?  I just took the risk, it was off a little which has the wheel run out as though buckled, I'll try tweak this.

The footman needed to be connected to the crank so an connecting arm made coloured and fitted. Leather thong tied to the footman.

Sue found the right drive band string cut and waxed it......what a difference tension was good and strong with no real stretch.

I turned up two lock pins for the wheel axle this stops the axle climbing or jumping about.

Satisfied with things as they were i had to repair the badly damaged and worn Maiden tower which had become so thin on one side, again laminating the are. I had considered rebuilding the are to almost original shape but this would then mean doing the other one. Instead I just strenghtened and shaped it to appear similar as the other one.

Today was good enough progress to then ask Sue to trial spin some fibre all went well still some minor tweaks to do but I will allow her time to locate any further fixes or repairs before handing it over. 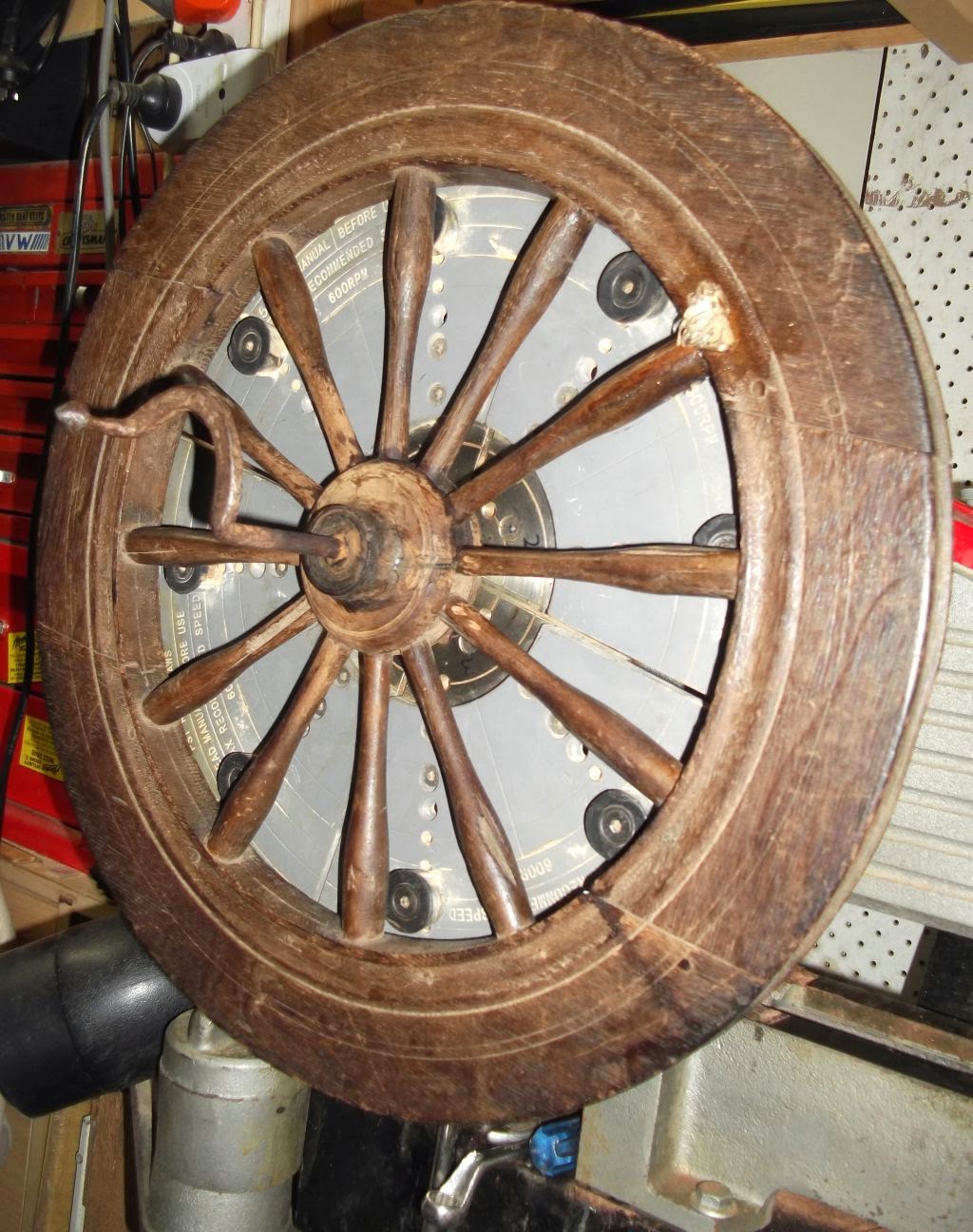 After a good sand around the whole wheel and spokes a coat of Danish Oil was applied.

Below the new connector arm fitted

Checking visually from above alignment and hw it looks. 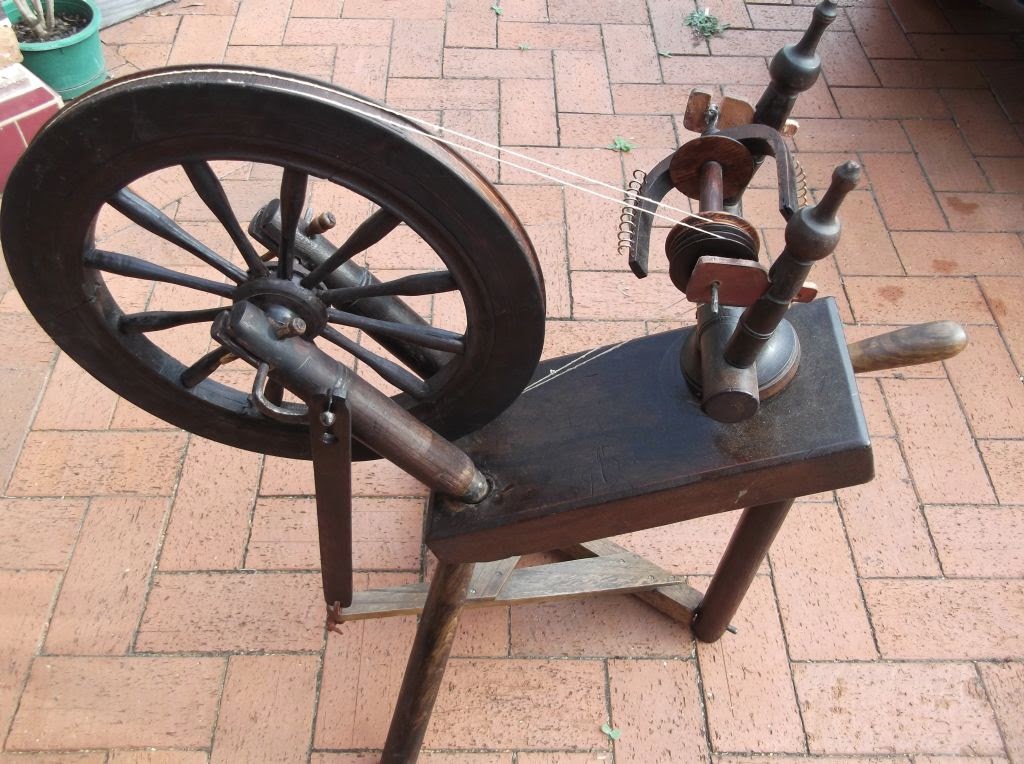 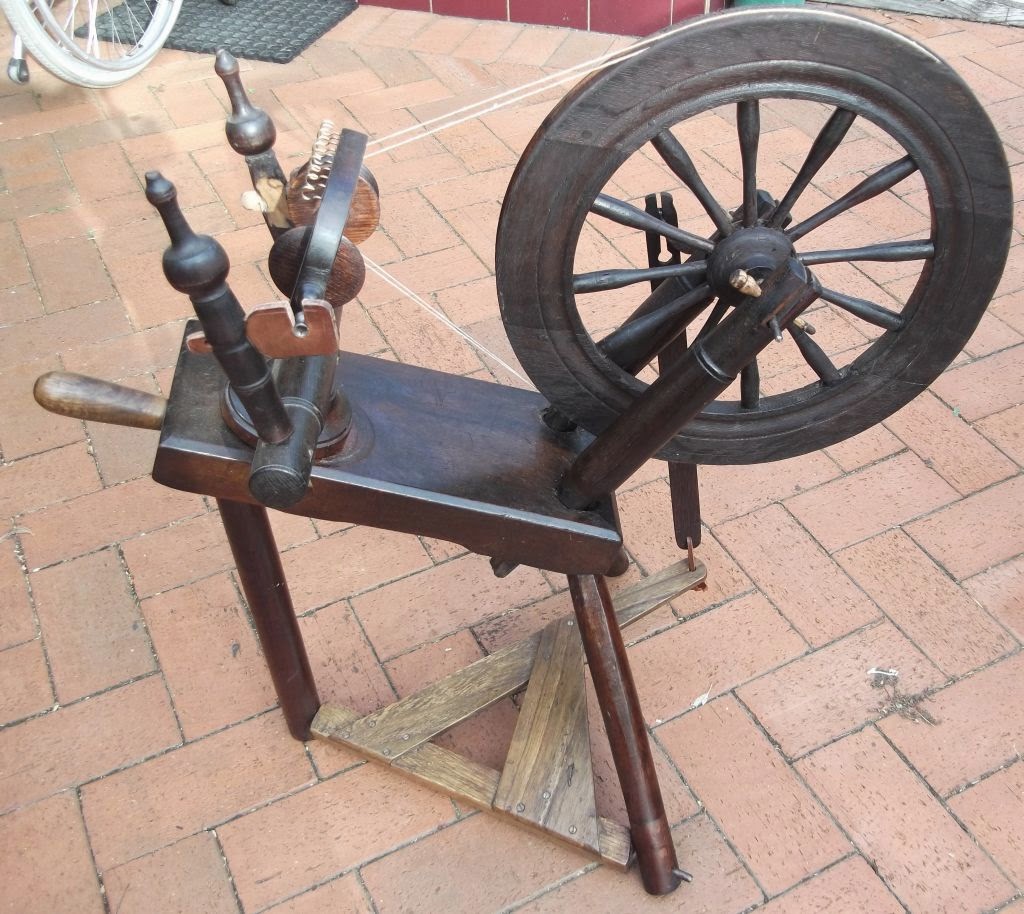 One of the new pins Below.

Below Laminating of the Maiden tower

It doesn't look pretty I know

On the lathe working the lamination area

Sue giving it its first test run using some Alpaca 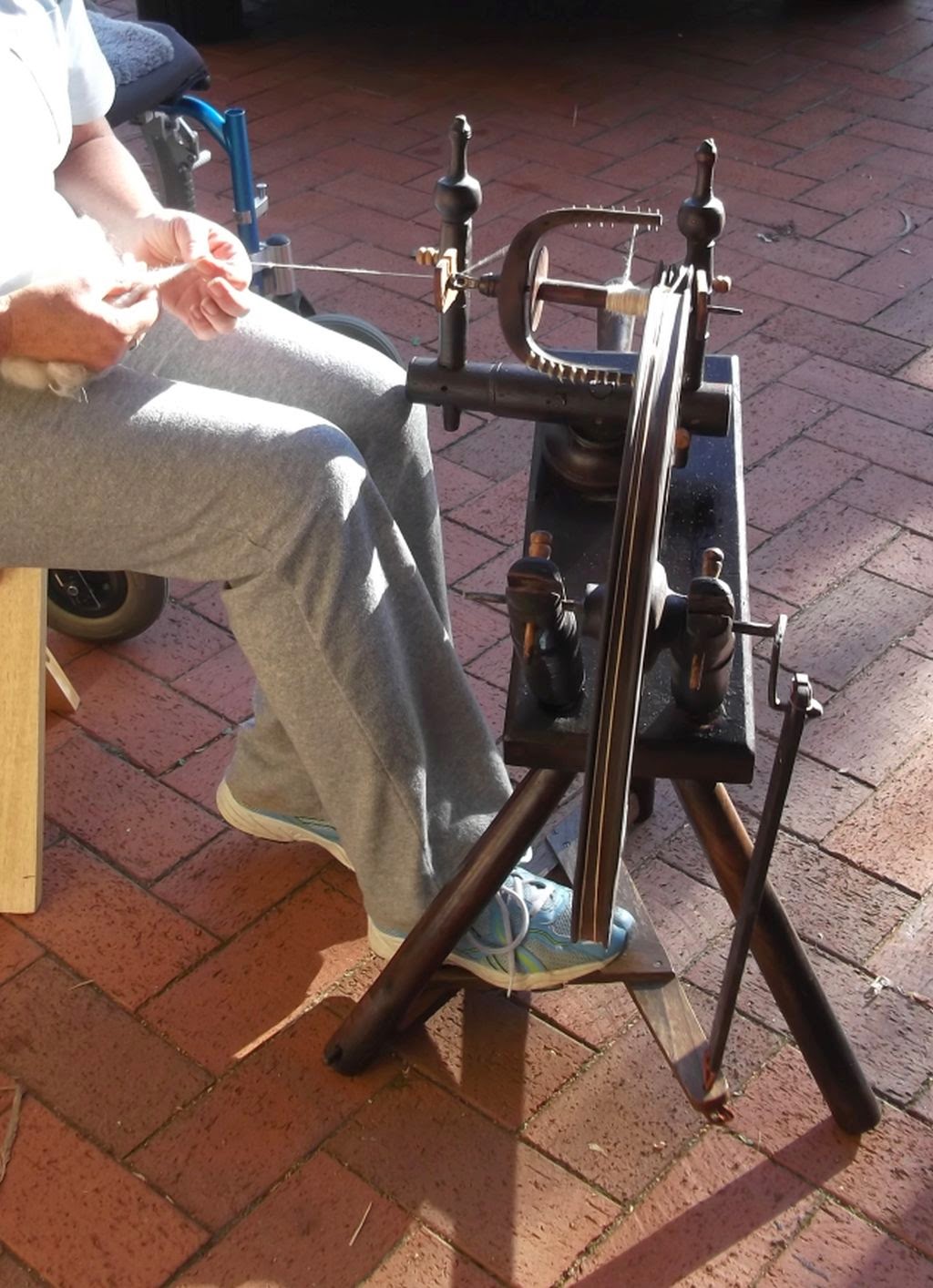 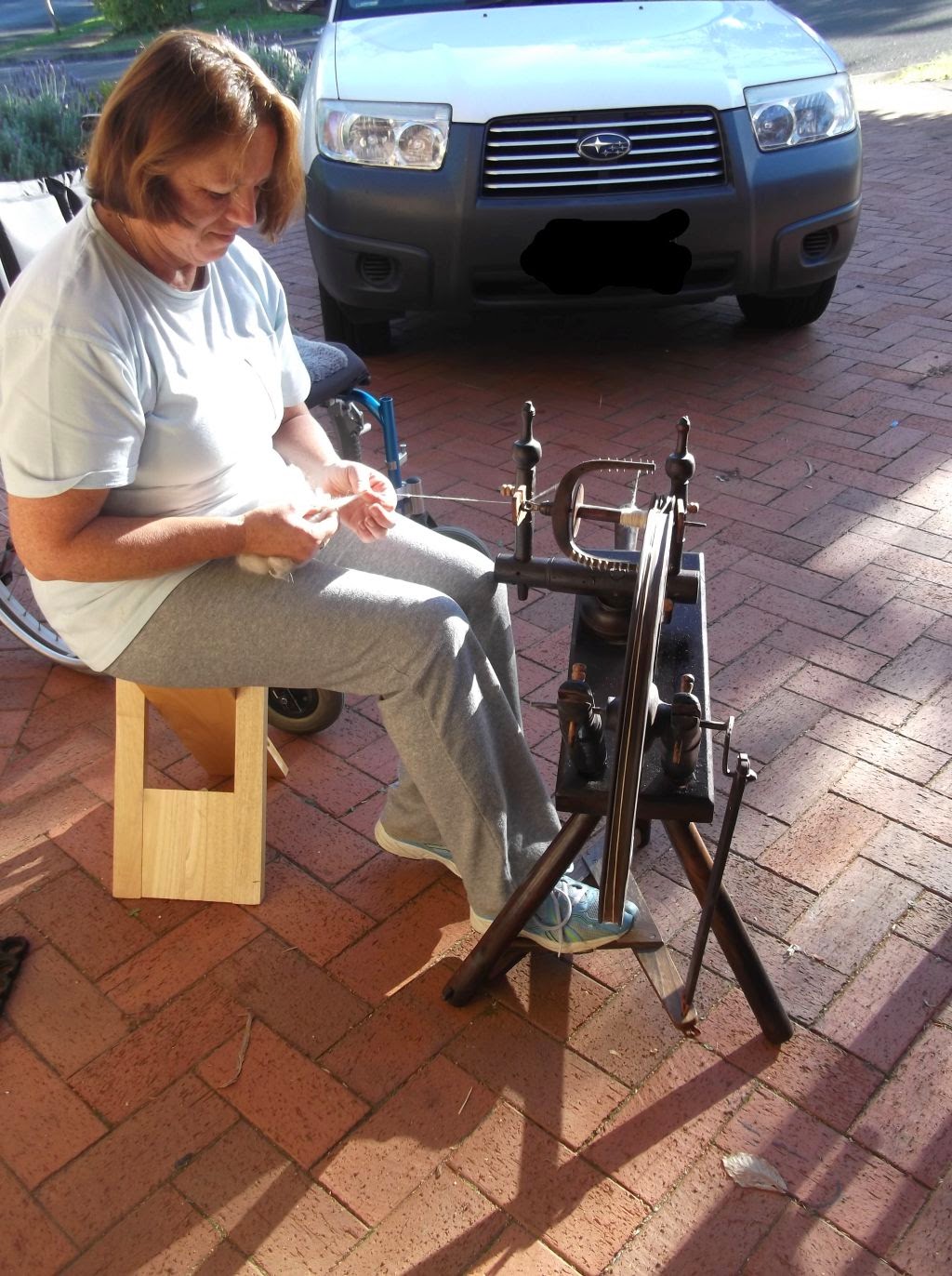 More to add to this post yet will do it over the next few days.


The wheel for Sue is on the bench. 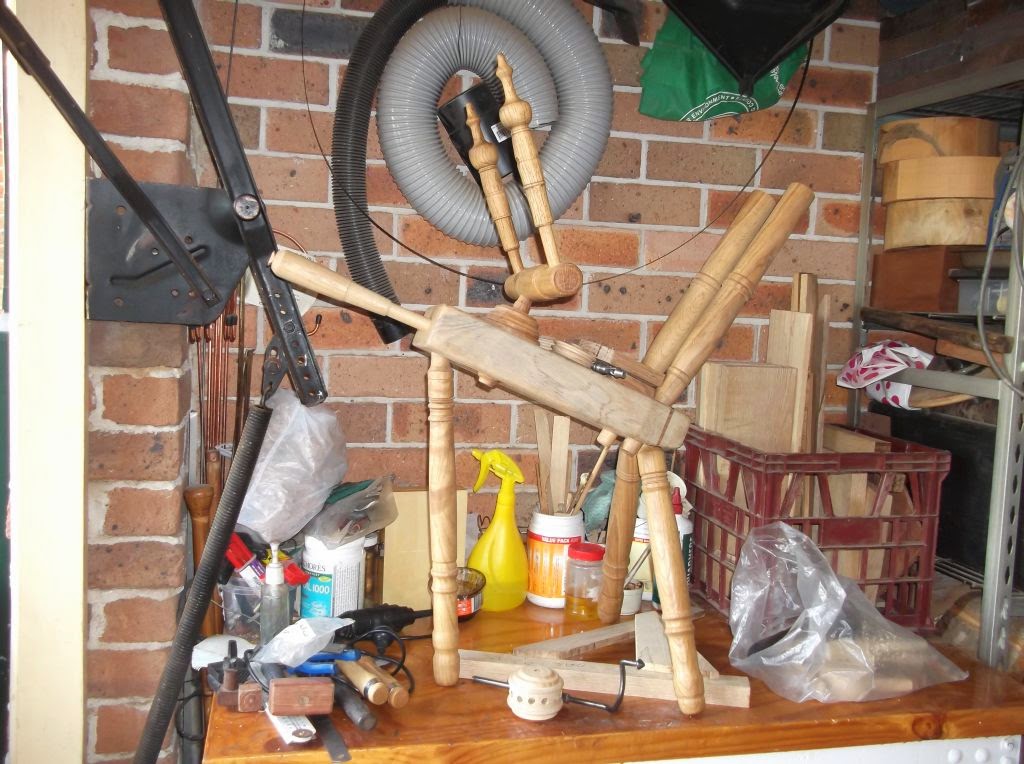 Posted by Raymond Sanderson at 22:01