It Rained it Poured for 9 Ddays

It had been some years since Sue and I took a break and had a holiday, 11 days away and it rained all but 1 of those days, still we enjoyed the majority of our journey. 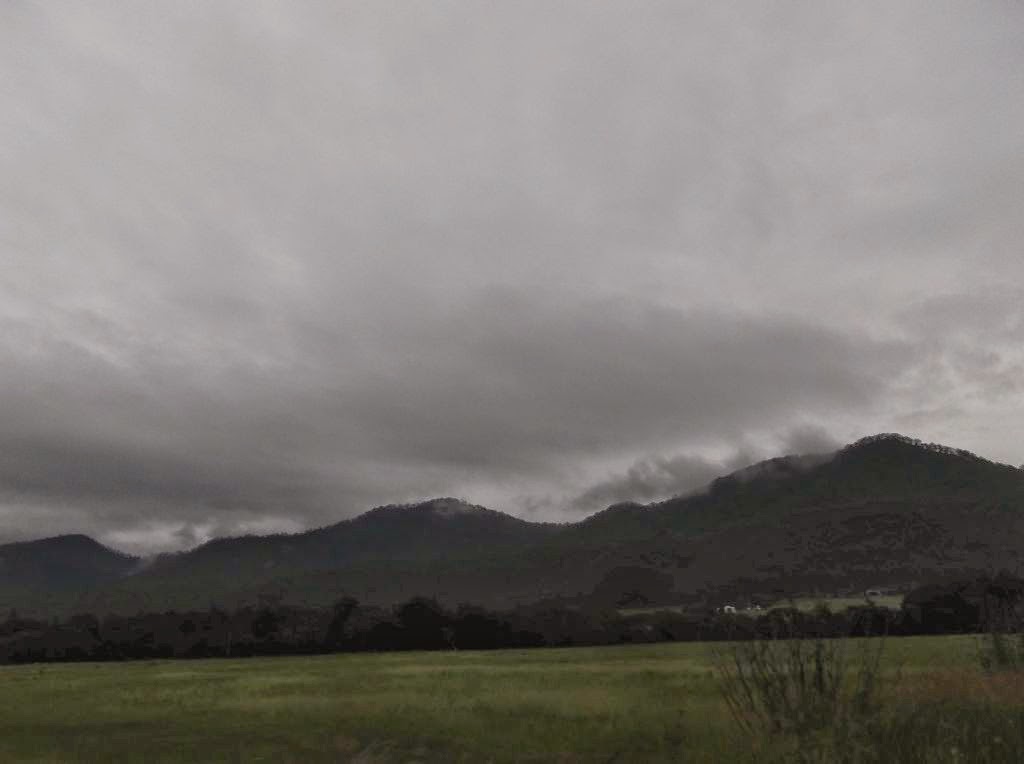 We left Sydney and it rained all the way to Tamworth, where we met up with Tim and his parents had a late lunch and dumped into a neighbour from our Tamworth days.

We called in at Tamworth Craft Gallery ,  I had not been before its located at the far side of town close to the BMX track, the one our kids used to race at.
The centre is home to Spinners and Weavers, Woodturners/workers, Blacksmiths and other artists, it has its own shop where all their works can be shown and sold. 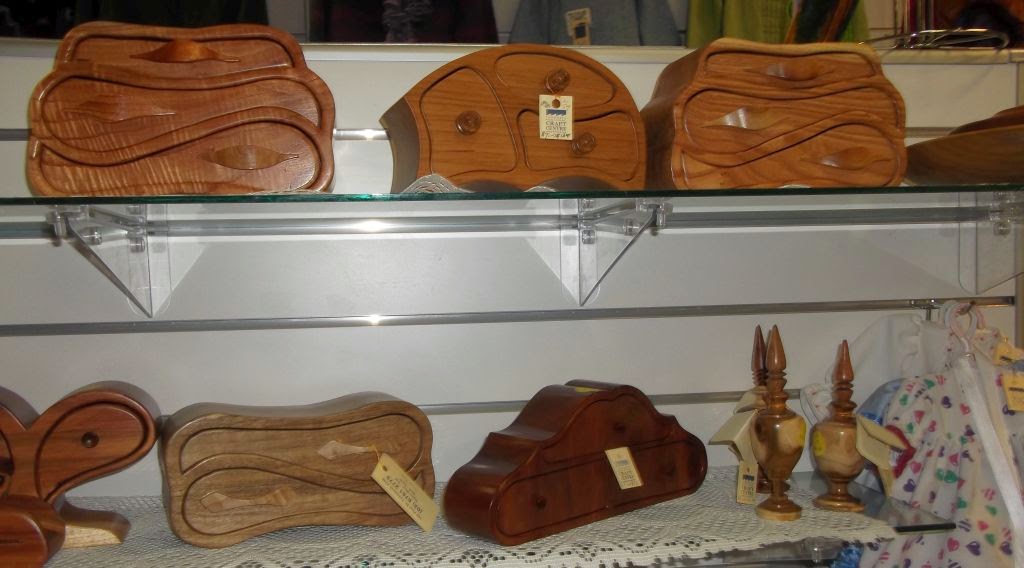 We stayed with Terri and Andy whom we had not seen for some time although we stay in touch. Terri was already into cooking a hearty dinner and had a cake and jug on in moments.

Day 2 Tamworth to Toowoomba with a short stop in Uralla at the Woolery and 2nd hand Bookshop not a wheelchair users delight to get around in.

I think this was the only time we had a small break in the rain just enough to get out nd back in the car.
We both ended up with books and Sue scored from the Woolery, Swing Swager Drape a book she has been after for some time.
Back on the road and down it came again.
Across the NSW, QLD boarder and we were instantly transported back in time.....no day light savings in QLD.
From there on it didn't stop/eased till we reached Stanthorpe where we needed a break for an afternoon cuppa, respite from the rain and wipers beating time. A bit of concern for our Forester as the familiar smell of a hot clutch wafted up when we stopped and I opened the door. A stall test was done, this means pulling on the hand break and slowly letting the clutch out to feel if there is slippage none thank goodness. Still best get it checked out.

The closer we got to Toowoomba the darker the sky and clouds became lower, the rain just kept coming. Driving towards B-doubles was like driving through a waterfall, Sue did a great job through the few road works, torrential rain and putting up with a driver/passenger. I find it hard to let go the wheel but I could have just as easy laid the seat right back and snoozed. 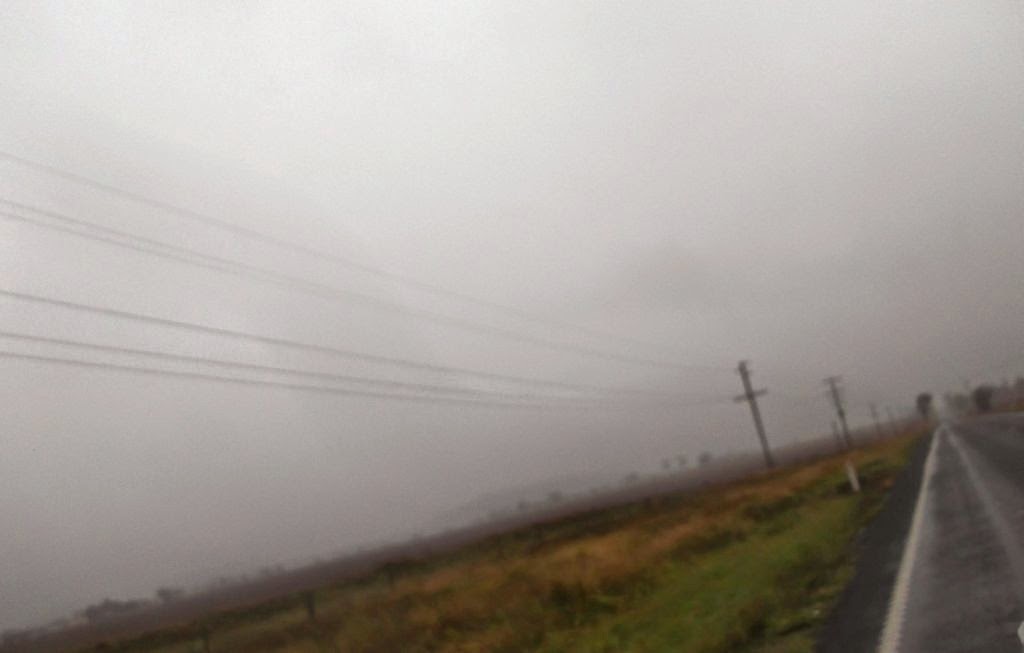 Above and Right
Taken about 15k's south of Toowoomba


We stayed at The Great Divide Motor Inn in Toowoomba easy access for disabled around the whole room and close to a little shopping complex 2 blocks away, motel is a little out of town centre.. A stroll to Picnic Point for the keen walker.

Day 3 In Toowoomba it was a quick visit to Wipples Subaru who took the matter of the clutch into their care finding it may have just been the amount of water we had travelled through and steam coming off the break callipers. Between the motel and the dealership we had a blown headlight globe which they changed. Thanks guys service isn't dead after all.

Toowoomba Royal Show was on so we spent the major part of the day checking out the local works and usual country show much missed from our years in Tamworth.
Sue located the Spinners and Weavers hall and couldn't resist sitting spinning, we had a good chat with the ladies.

The Wood Chop event was on no Poplar for these guys all Hardwood.

The sky looked threatening on our arrival even a few drops fell but soon gave way to sunshine.

This fellow was making a gift for our Grand daughter Bianca

Some of the spinners show exhibits. An interesting Lace Bobbin set up. 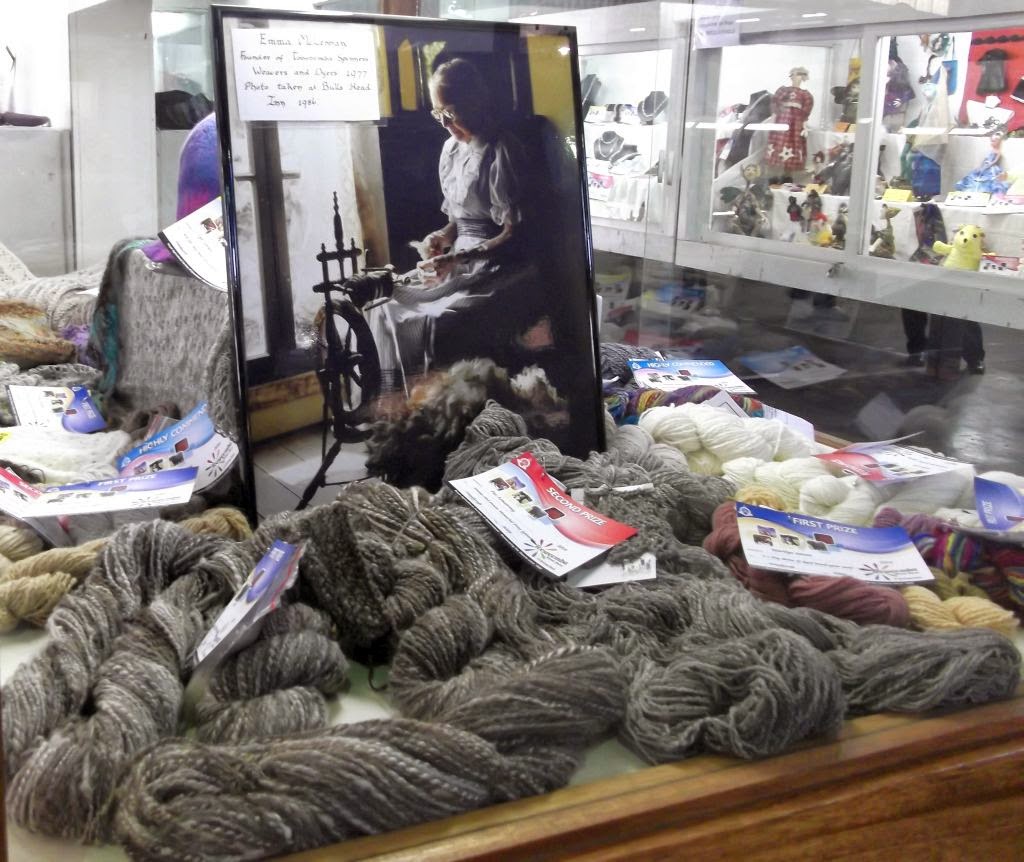 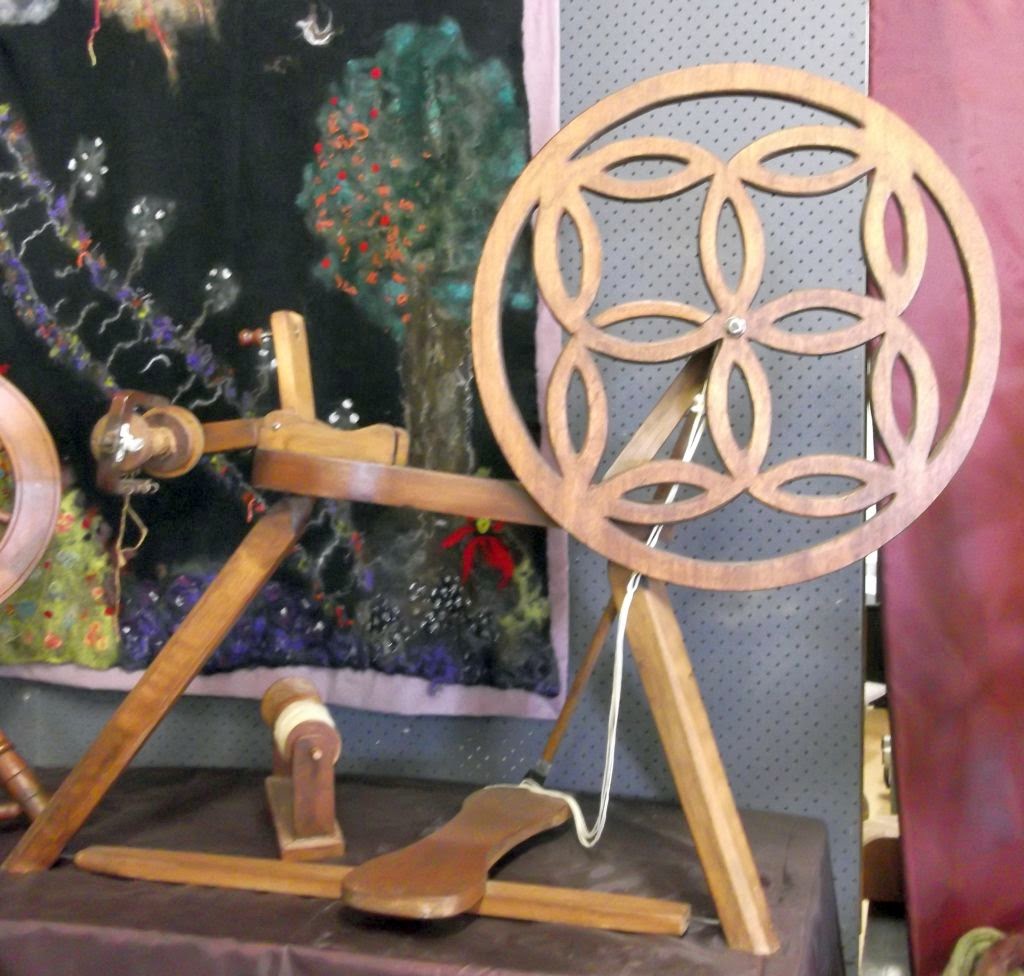 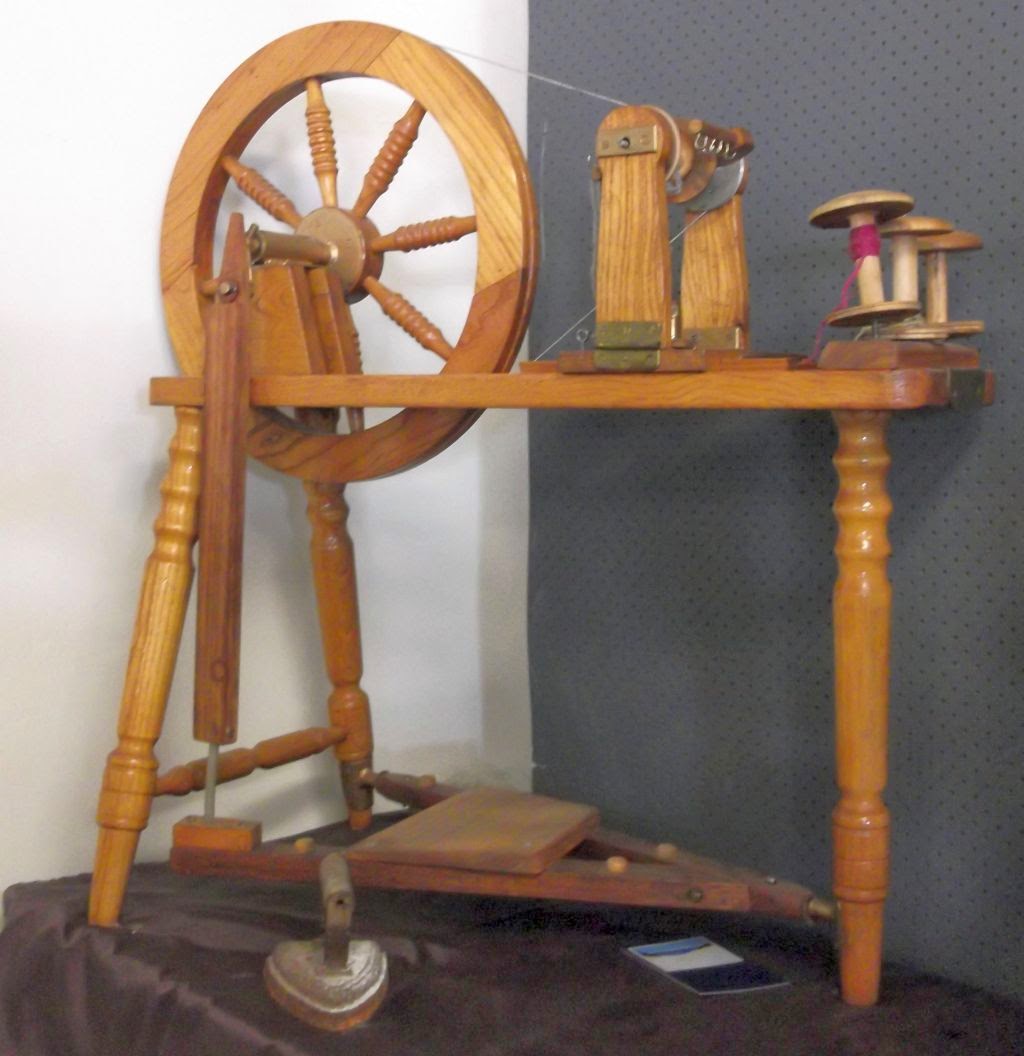 Two wheels of the Spinners and Weavers  both home made. 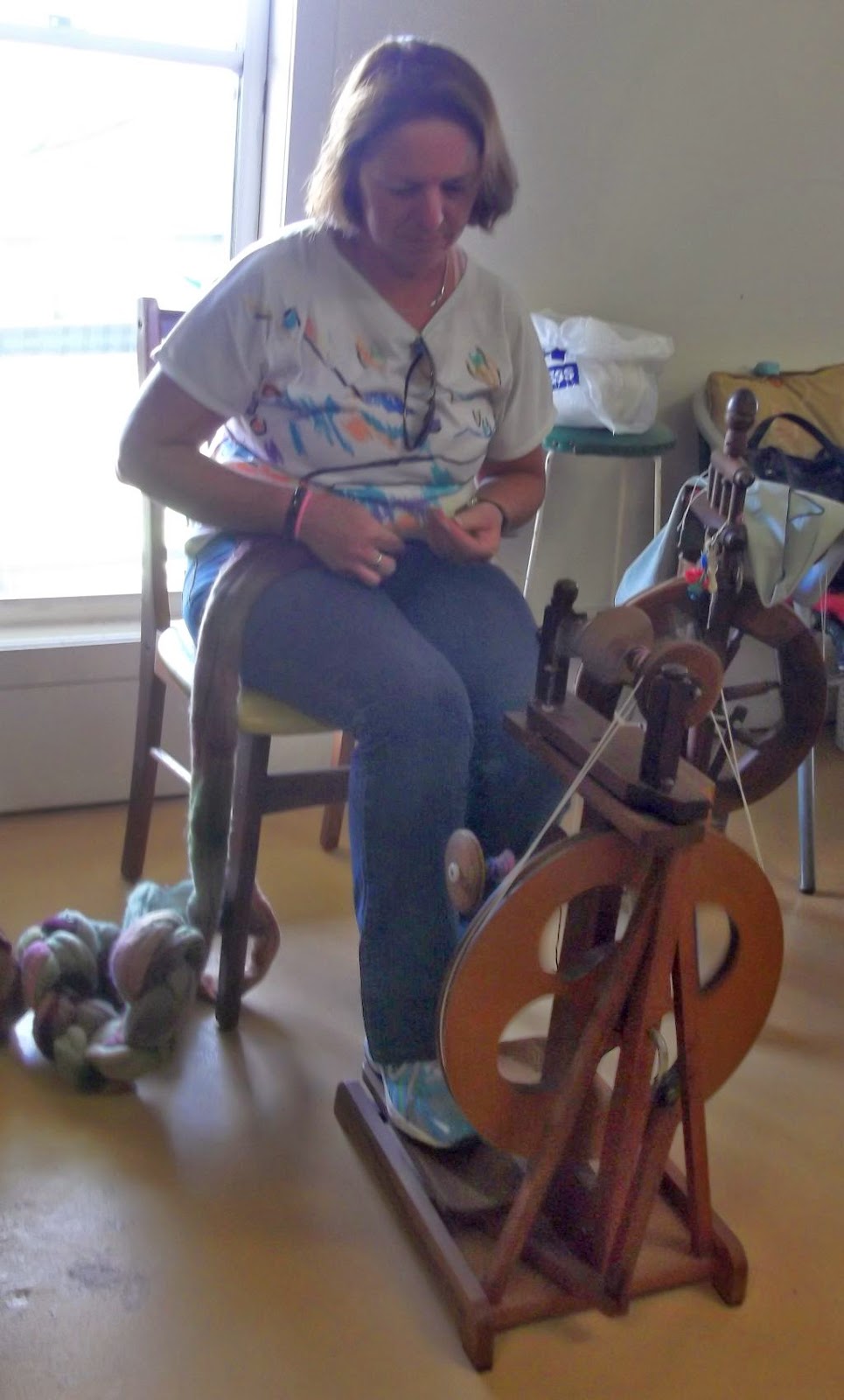 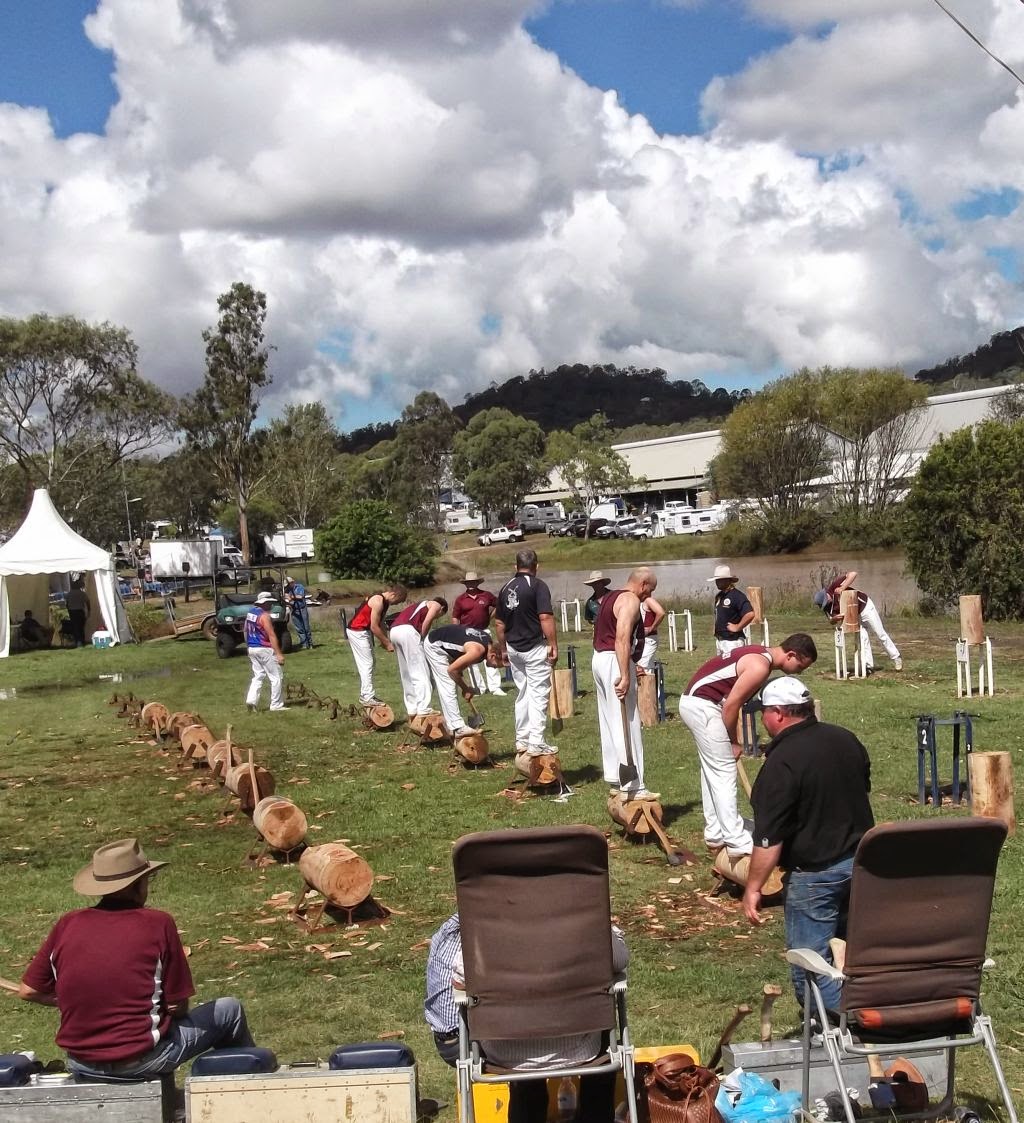 The wood chop above and right

Right the store of logs yet to be chopped

Some stationary steam engines this fellow was throwning the wheel to start it up.

Day 4 Cobb & Co Museum an inspiring look back into the past of wagon transport, a great collection of Wagon's, Carriages and Sulky's.
Here I got to meet for the first time Wendy known on the Woodworkforum as Ruffley Rustic, she was in the middle of a Leather handbag making course so the time was short to chat.

Toowoomba is a Garden City the older sections of town are lined with Camphor Laurel and African Plain trees, we strolled around Queens Park which adjoins the museum almost. The windmill exhibition between. 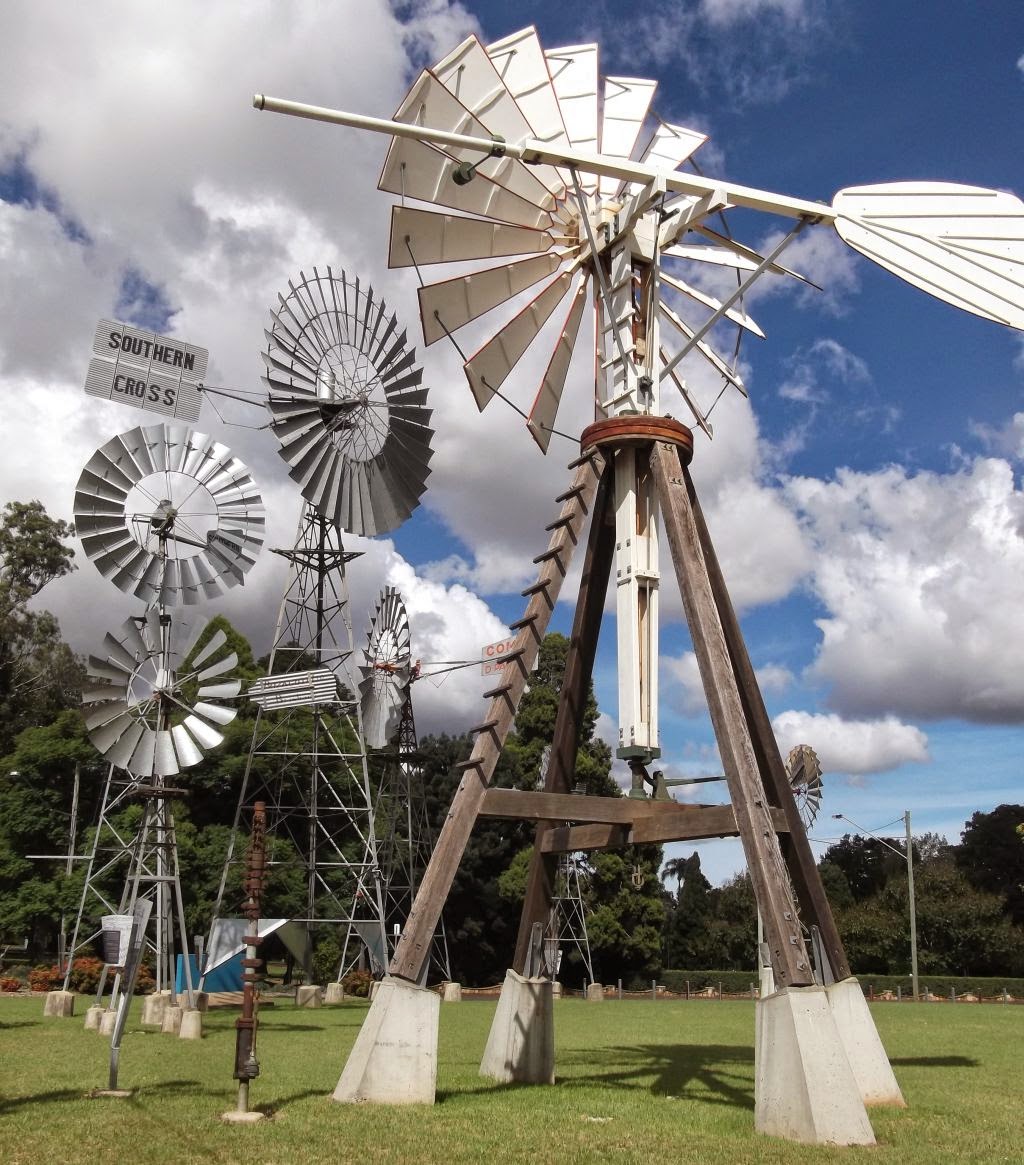 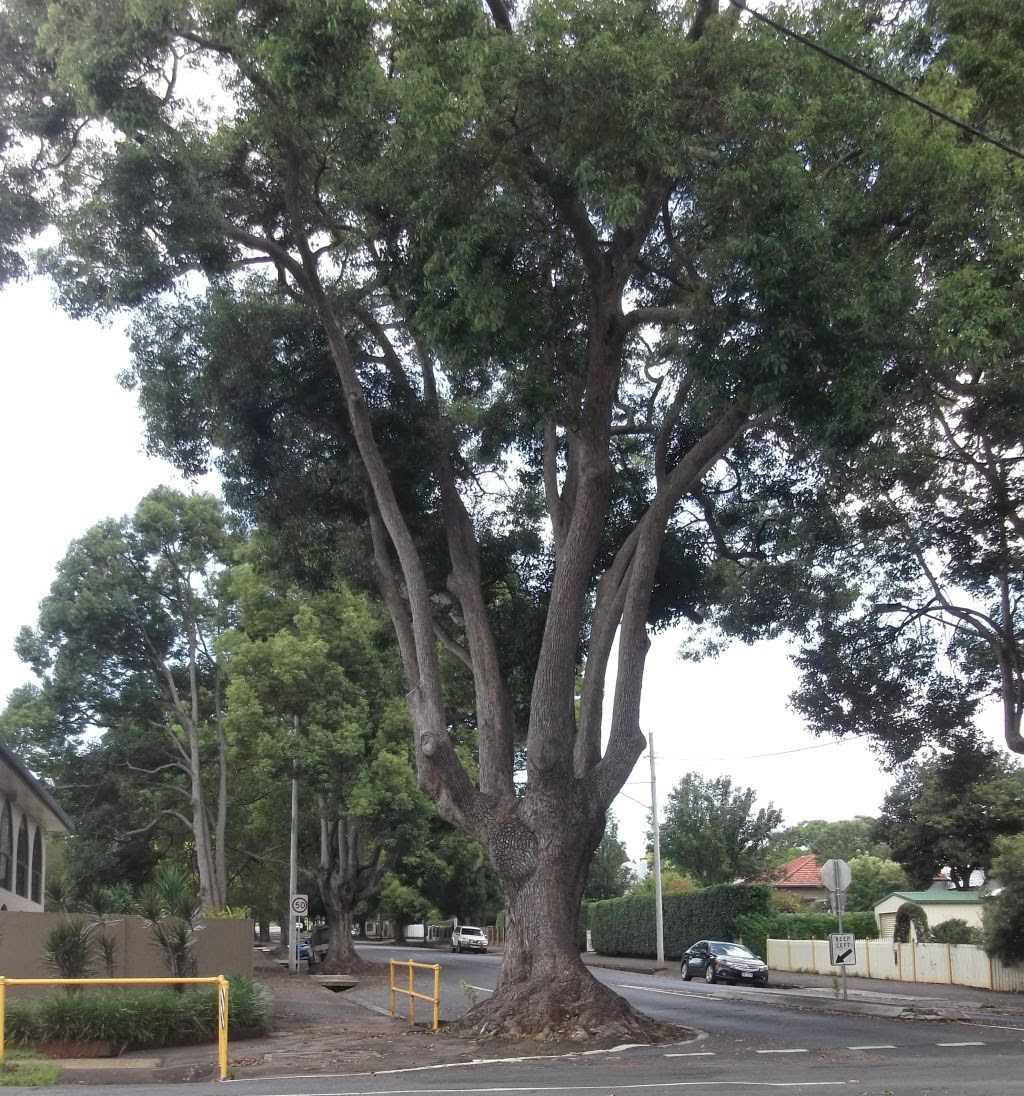 As I had an interest in Coach Building we took many photo's just a few here and the workshop. 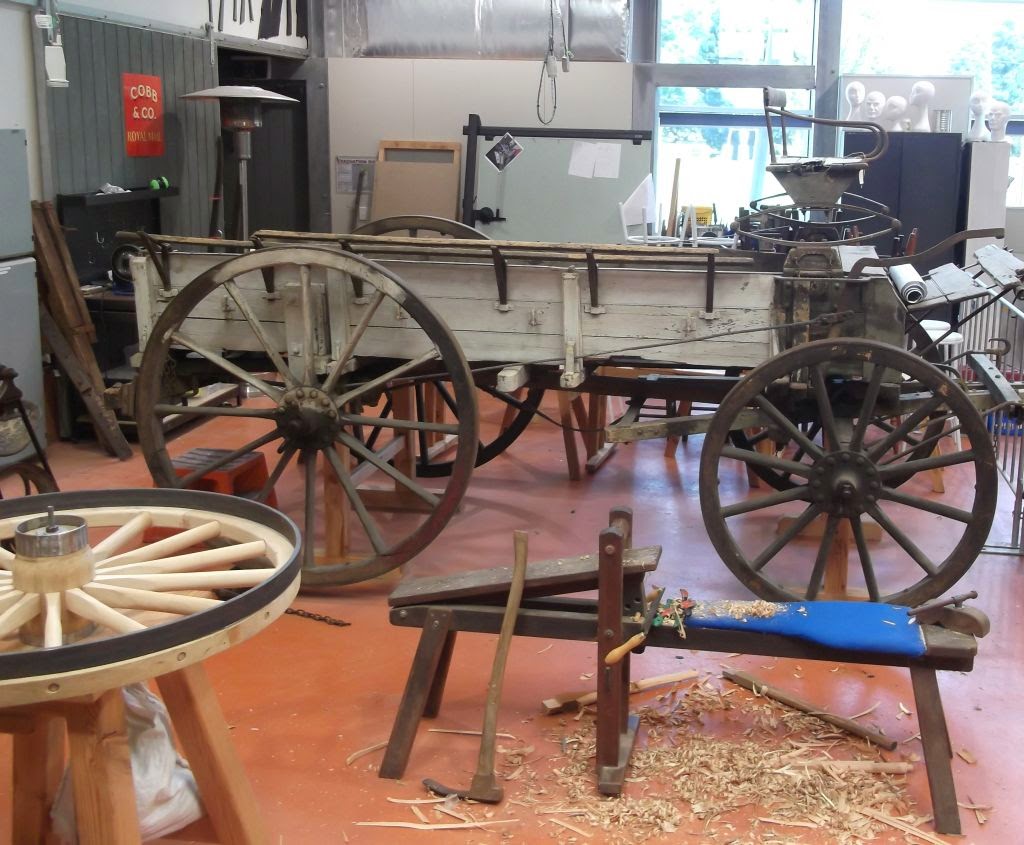 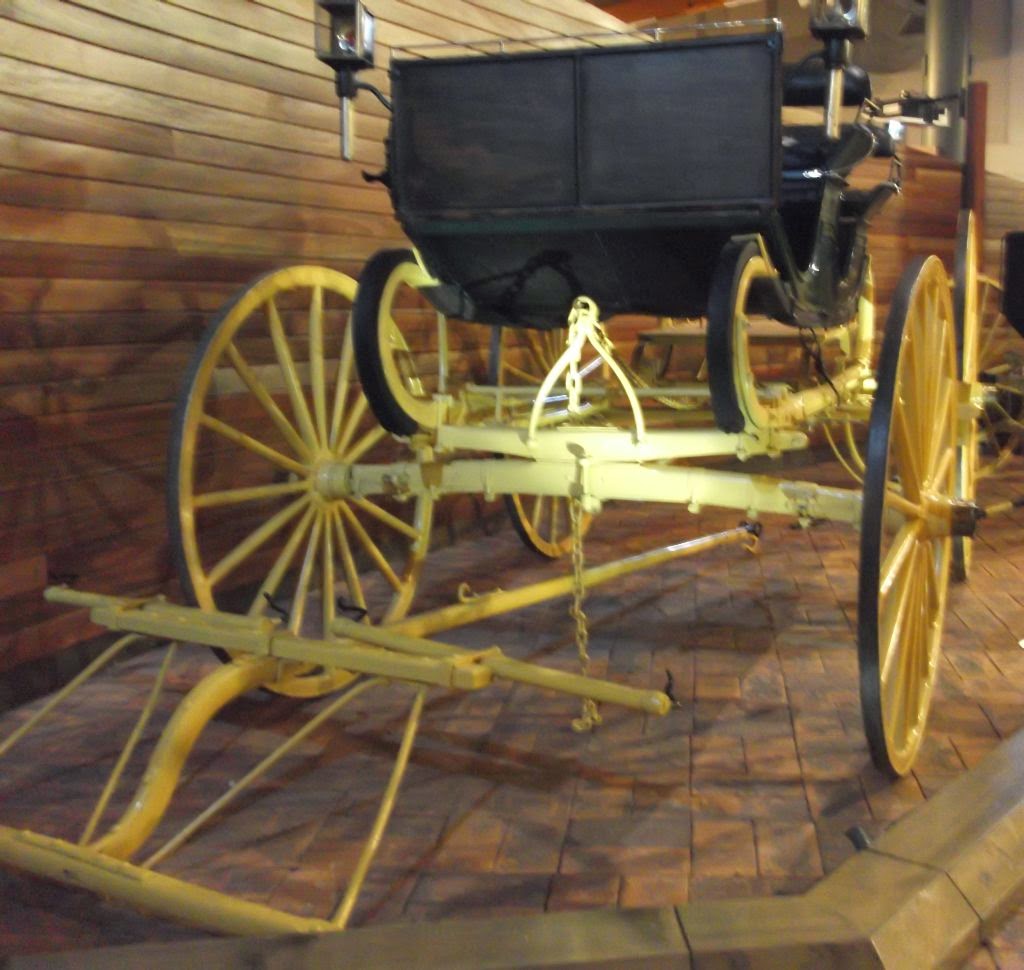 Wendy and myself it was the shirt that gave her away.

Day 5 The photo below I took at about 9.30am and its how the weather stayed all day so it was a sit back relax in the room and read, Sue knitting as she does.
Our day of touring about the area will have to wait till next time. 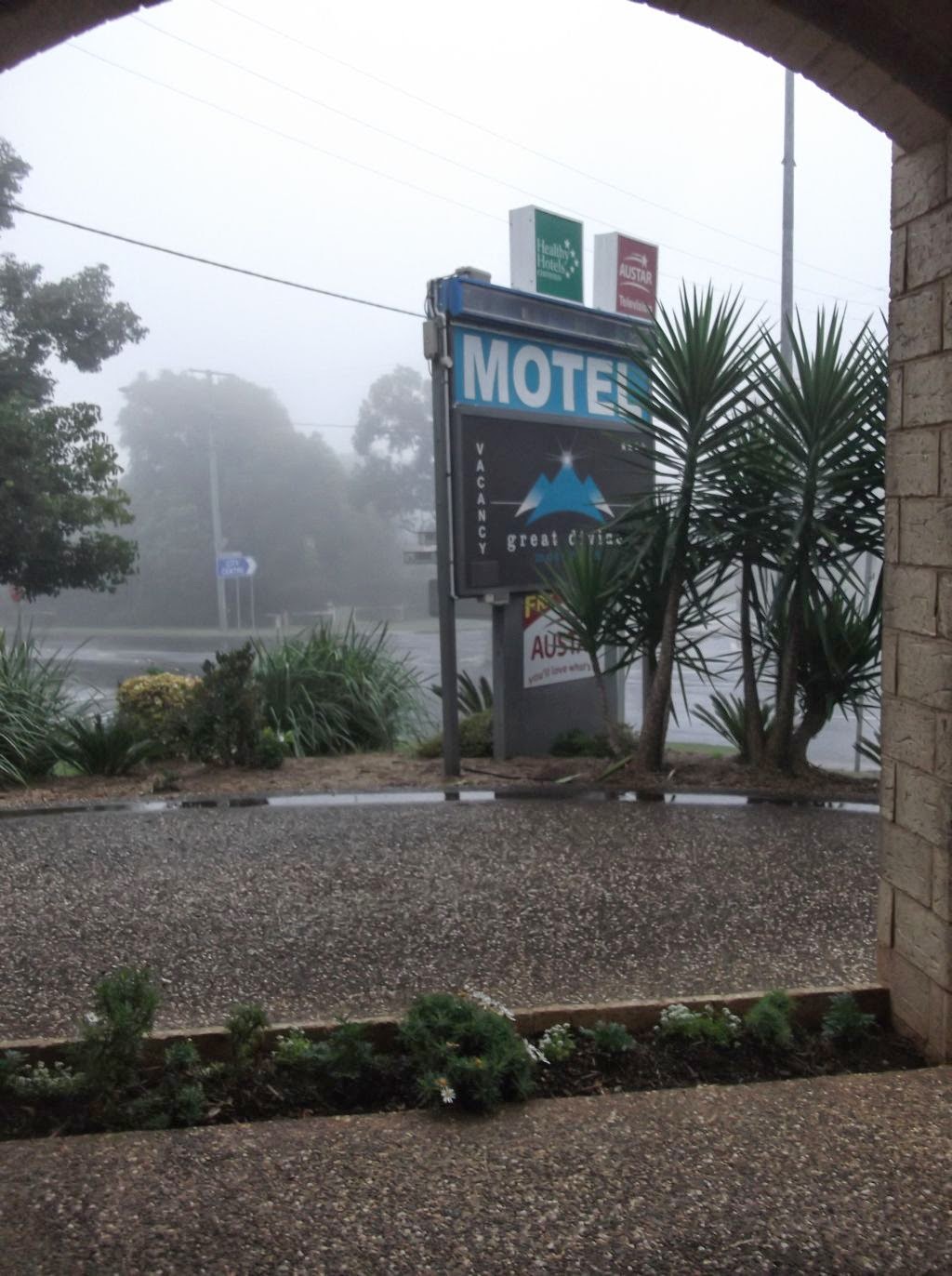 Day 6 Headed to Munruben down the hill to stay with John and Liz and their family.
At last sunshine all day well most of it. We were greeted and made to feel at home first of all at The Green Bank RSL Men's shed where John spends a lot of time with a great bunch of blokes. 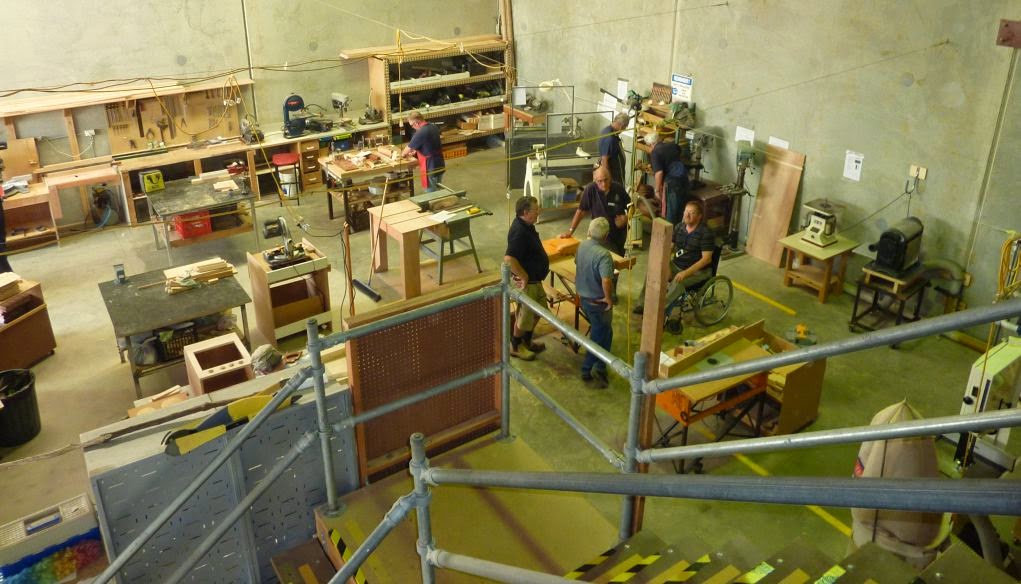 Then at John and Liz's home where we met their daughter and her family Charmain, Simon, Bianca, Jaccey-Lee and John's son John.

John's son in law Simon loves to cook a bit like Sue's dad for an army. I wish we had taken photos of the food he served during our stay.  A rack of beef ribs for our first nights dinner, a full cooked English breakfast in the morning and our last night a BBQ. Thanks to you all.

John and Liz had just had the two sheep sheared and John had kept the fleece for Sue. 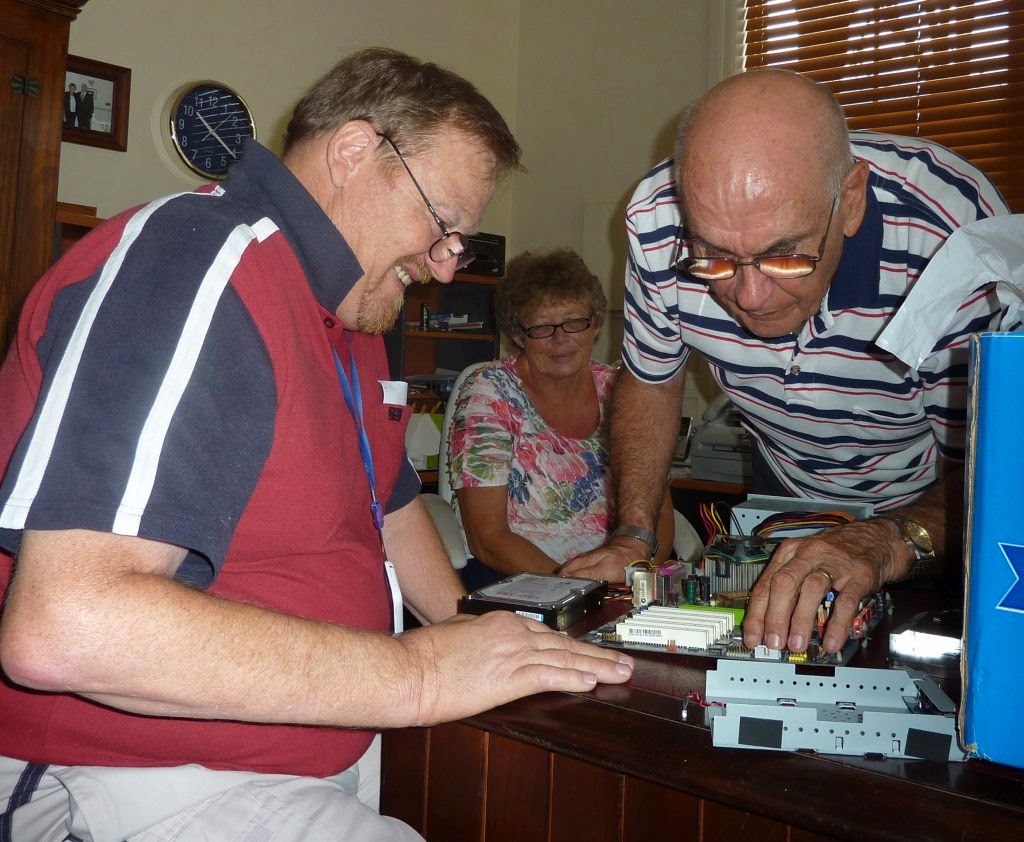 Left  John and I trying to impress Liz with our lack of computer knowledge.
Day 7 Mount Tambourine for a few hours outing and stroll around the Clock shop which saved us from a drenching. Then a cuppa.

Day 8 We had to change travel route due to the rain had washed out section of Summerland Highway. The sun shone and once into NSW it was a 9 hour drive instead of 7 due to road works and 40k zones, this was worse than the two days travel up to Toowoomba in the rain.  The M1/Pacific Highway is  with this a joke, though many a new upgrade and town bypass, It drained us more than the days in the rain driving. It was all the way to Tinonee and Artisan's On The Hill. Located just south of Taree, hosts are Peter and Christine Calabria.

This unique gallery, with its hand's on workshops in a number of things, and B&B is nestled high up on a hill overlooking grazing land and facing the morning sun.
I met Peter through his demonstration's in wood turning at Trend Timbers, Sydney Woodshow and the woodworkforum. We met Christine on our first call in for an afternoon tea stop on our last trip north some years back.
I had to ring ahead to alert them to a late arrival, again a warm welcome as we pulled up.
Peter cooked dinner for us that evening a superb special marinated Chicken and salad.
Our room was the Huon room with lingering scent of Huon, this room is a disable wheelchair friendly room very well laid out in all aspects. The bathroom also, except for height of the wash basin.

Day 9 After the previous days 9 hour drive the last thing we wanted to do was hop in the car so we just lounged around Artisans on The Hill. Sue knitting and reading me reading and using the laptop for a short period.
Christine made us an excellent lunch of salad and chicken wraps tea was on the go always.

Peter had to work so no real shed time although he allowed me to go check out the changes.
Peter rang to see what we had planed for dinner, he graciously suggested he pick up Indian take away, a choice between us all was made an excellent choice of dishes shared between the four of us. Thanks again.

Thanks Peter and Christine for making us welcome and sharing your home also. 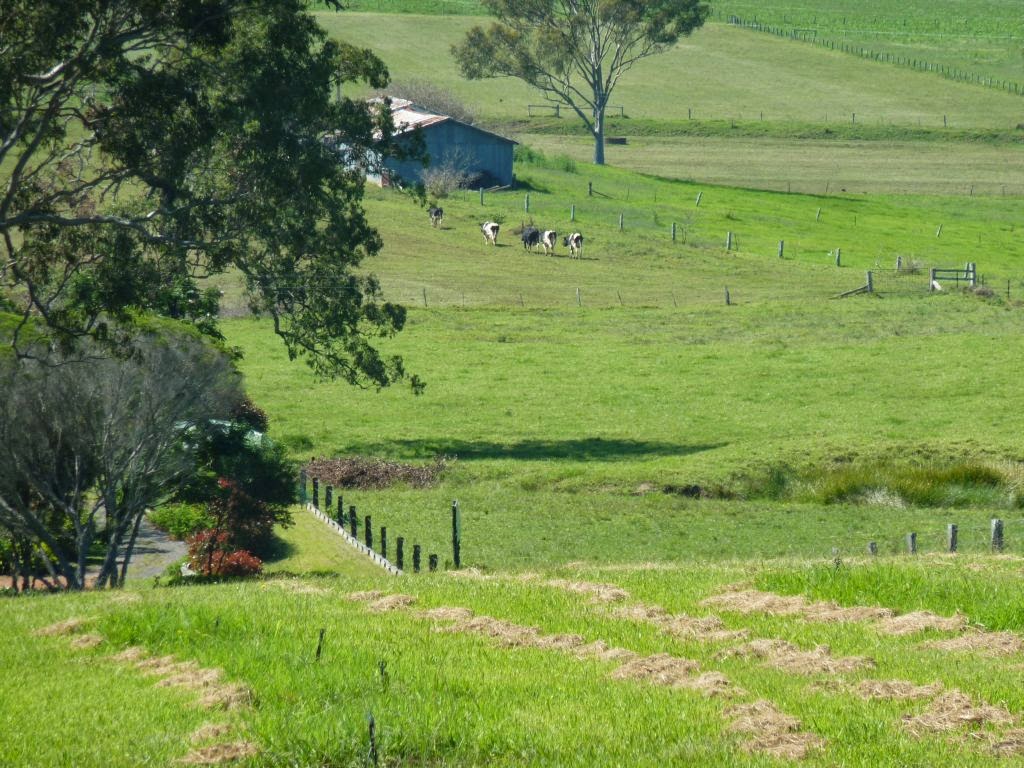 Day 10 An easy start to the day as we only had to reach Newcastle, calling in on a friend from the Ornamental Turners, Tim who now lives in Tinonee a short stop to catch up.

Raymond Terrace next port of call to catch up with Ian a pen turner who was in the midst of a great crisis with a pen set he had had engraved for a wedding. Great when the engraver spells the name wrong 3 times.

Into Newcastle to catch up with Mark and Helen. Mark, Sue and I wandered to the coffee cafe around the corner, after sipping hot chocolate we headed back to the motel. In returning to our motel we both fell asleep, waking at about 7.30. We headed out the door to have dinner only to find the rain had found us again, dinner in the room cooked by the motel well mine was Sue had a salad.

Day 11Wood turners of the Hunter Valley  had organised for Joey Richardson to pesent a demonstration of her methods, a full on day.
Thanks Paul for keeping us in the loop with a great demo and Joey for giving 110% non stop. 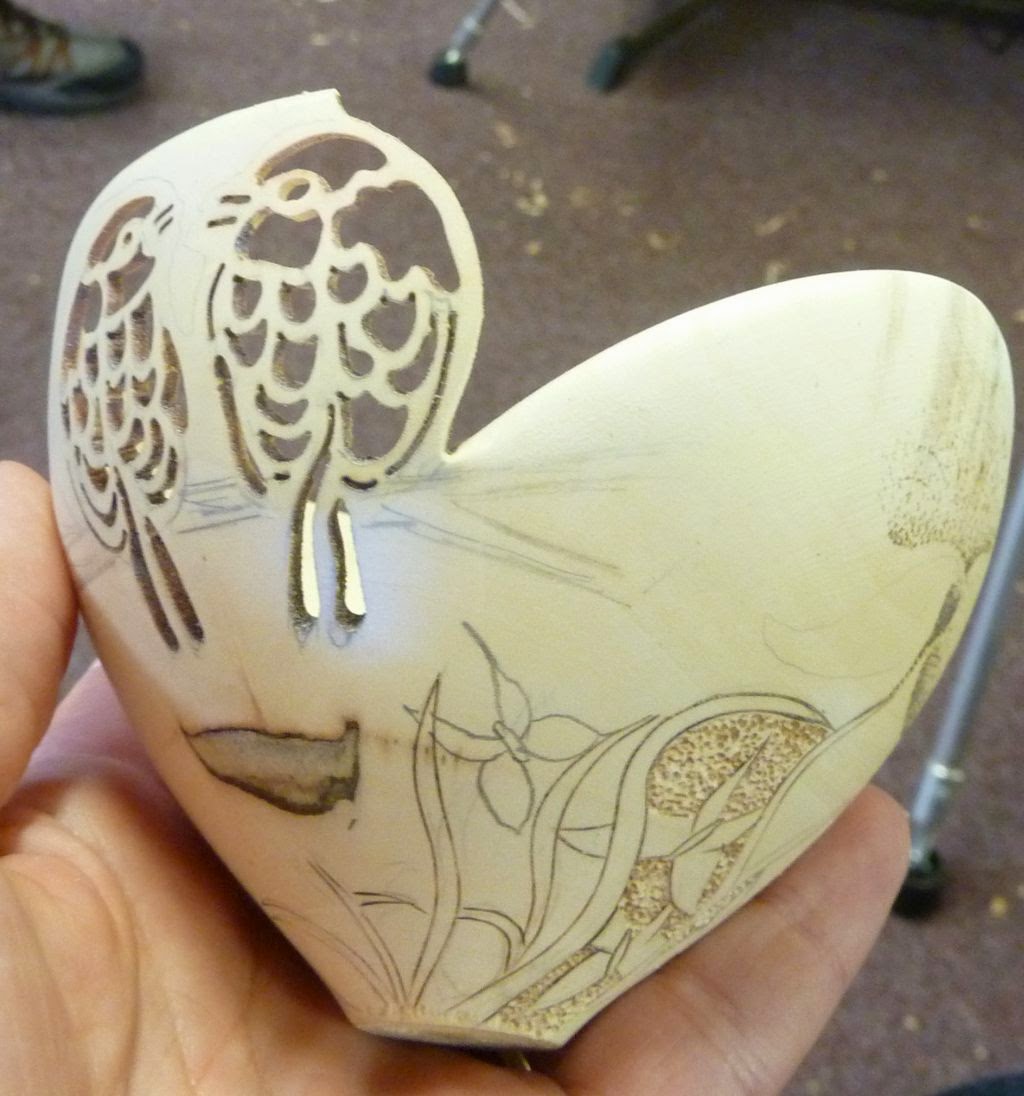 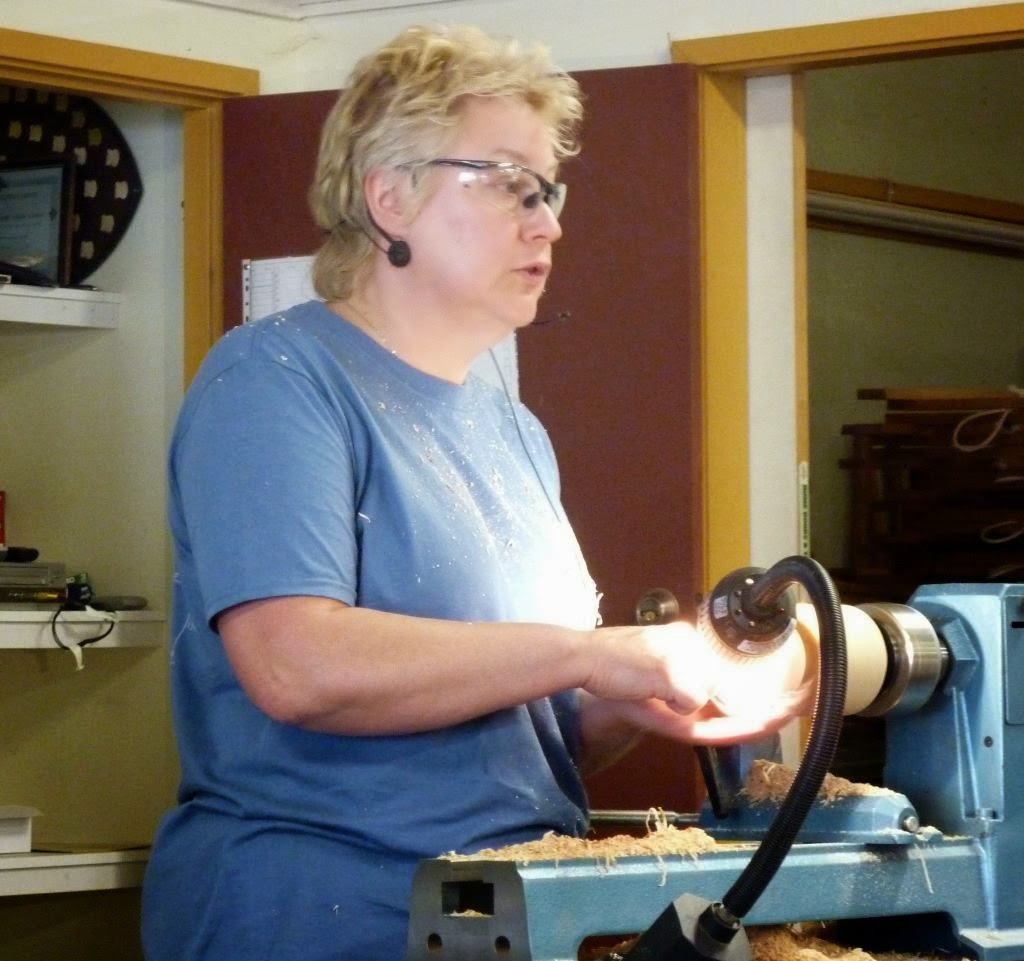 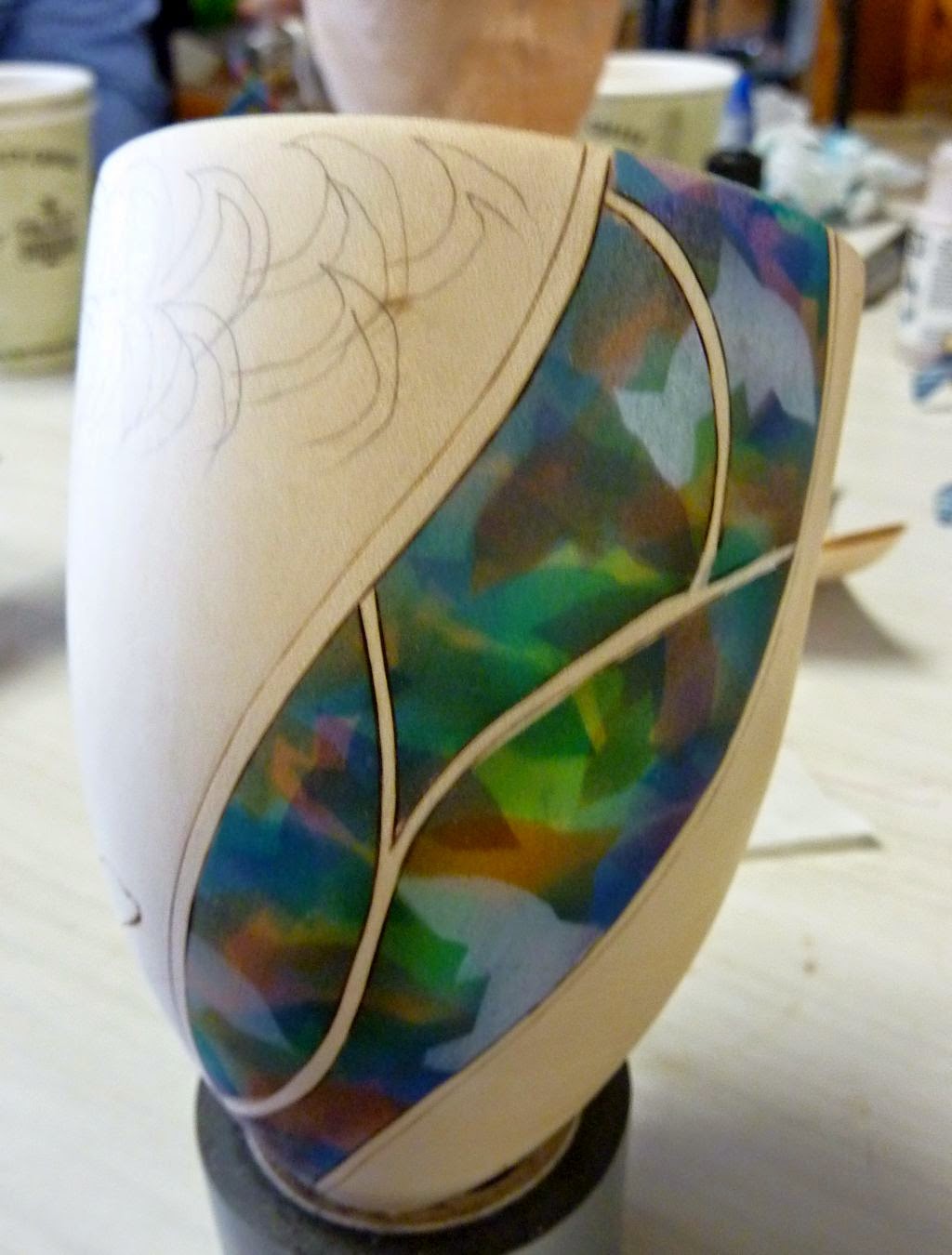 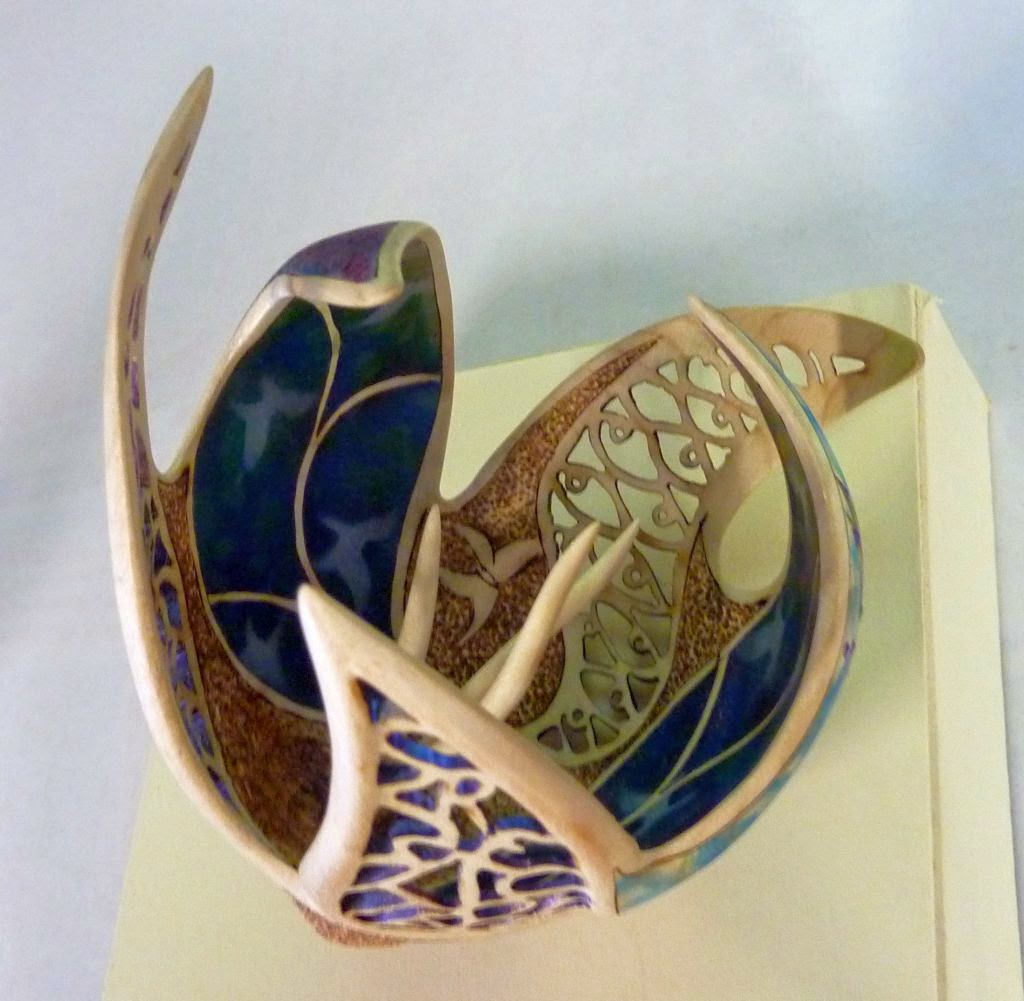 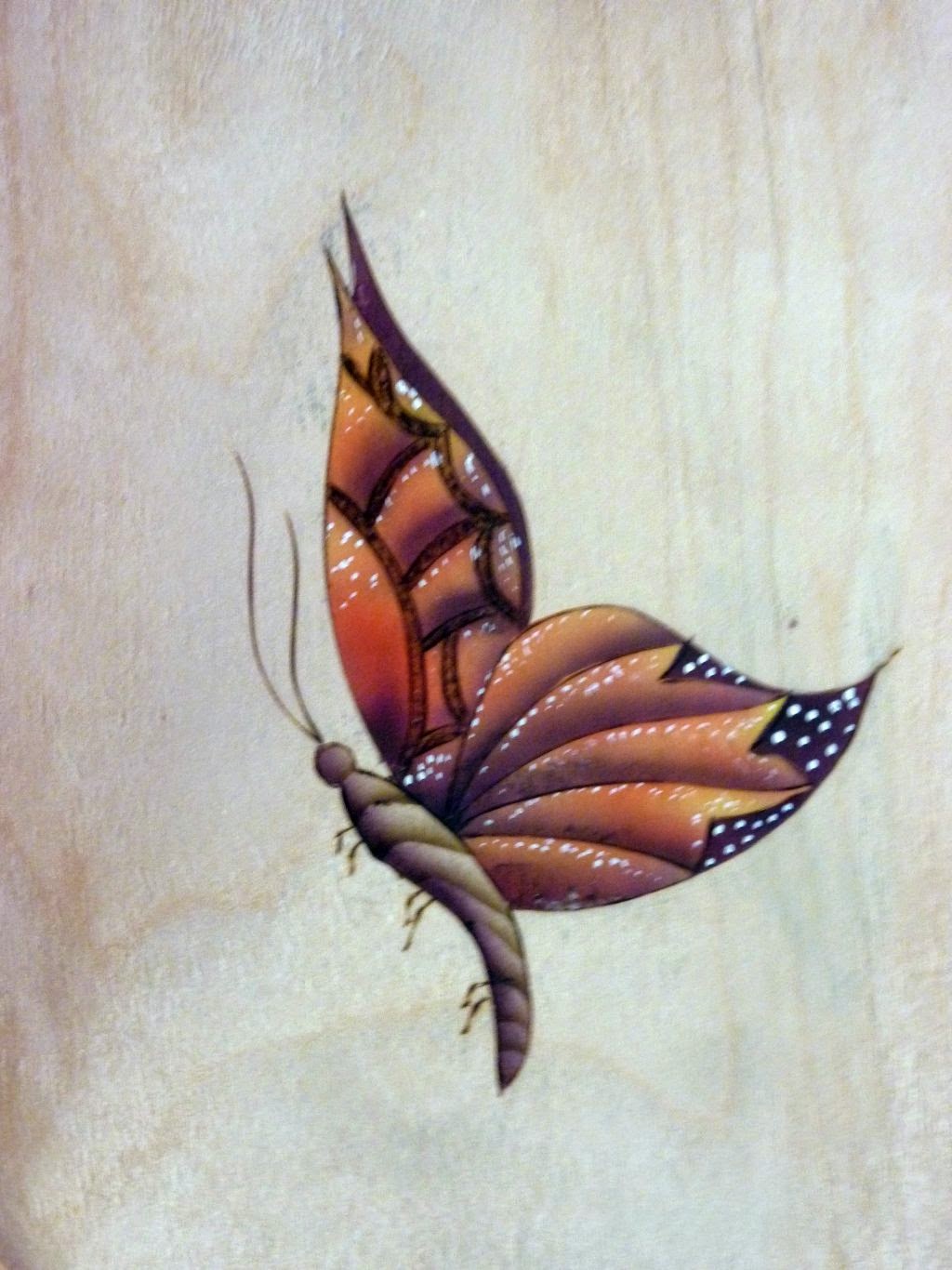 We departed the demo early to head home where Belinda and John had opened up aired the house and cooked dinner thank's guys.

Even with the rain the trip was worth while but March, April the rain is just to much to handle if you wish to get out and about along the east coast.

Posted by Raymond Sanderson at 18:40