Phew time for an update even though its three weeks past I am trying to catch up really. Another OTGA outing this time 2 days at Trend Timbers  out at Mulgrave near Windsor. Trend is another sponsor of the OTGA  they sponsor a number of other local groups. This year along with Artisans Retreat  they held the 1st ever turning Challenge. This was to produce an item with in an hour, to finished stage, prize if a club was a Cougar Midi Lathe which was won by Hawkesbury Woodworkers Group.  The winning piece is the tri-legged lidded box seen here in Ayshen's photo  (thanks Ayshen).
Adrian Clark from Trend Timbers presented those clubs who took part with a voucher for $150 for taking part.

We had a late start Friday due to another matter, but arrived by 1pm all was well under way. Being right on lunch time the queue to the free BBQ was long, but a nice steak sandwhich and cuppa then it was into some work. Sue always stays and took her spinning wheel along, we found was a good thing as Richard & Allison Clark Trends owners have a few Alpaca which s what Sue was spinning. Allison is keen to get into spinning. On Saturday Hunter Valley Woodworkers had hired a coach as they do each year and about 40 of their members come down for the day. Eric Walker one of their members is also an OTGA member who has built quite a number of Holtzapffel devices and brought along his latest creations. 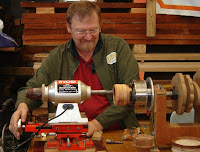 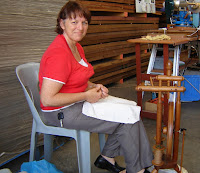 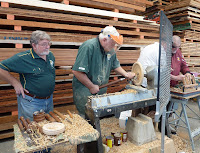 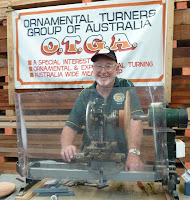 Below I had pleasure in using a Rose Engine left to the club from Peter Harding who passed away during the year. 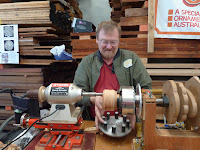 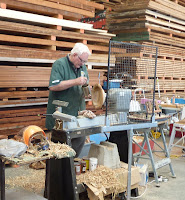 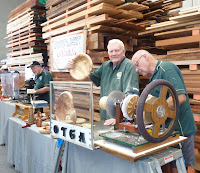 Below Eric Walker and two of his OT works 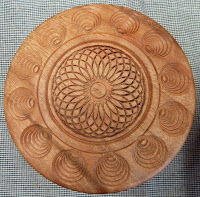 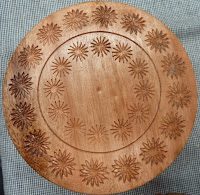 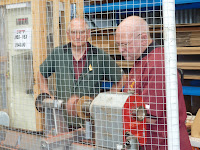 Right Toby and Bill during the Challenge


Posted by Raymond Sanderson at 09:06